We Actually Got Close

AN YOU IMAGINE BEING PART OF THAT SMALL GROUP OF BELIEVERS IN that upper room described in Acts 2? I can’t count the number of times I’ve read of the overwhelming movement of the Holy Spirit that took hold of the women and men who cried out to God in that atmosphere charged with His presence. My question to God has always been: Will I ever get a chance to experience You on that level? Will I ever see You move with that kind of intensity over Your people?

I’ve been in all kinds of meetings and gatherings in which we’ve talked and even prayed for the Holy Spirit to be poured out in the manner described in Acts 2—and all through the book of Acts, for that matter. But we’ve never had the level of visitation by the Holy Spirit described in Acts 2.
I’ve been evolving over time in my belief that there comes a point when God’s heart can be so moved by our persistence for Him that He can no longer resist our ache and passion for Him (see Mark 7:28). At some point, and of His own choosing, God will come through, or at least show a glimpse of what He will do when our faces and our hearts are turned fully to Him. 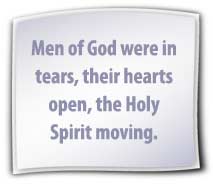 Recently at our conference pastors’ retreat we actually got close to an Acts 2 moment.
From the start of meetings Sunday evening, the perfume of God’s presence bathed the atmosphere. As we entered into our first corporate time of worship the men of God were ready. Their voices lifted in praise and adoration of God was infectious. Then, as at no other time I’ve seen in a pastors’ retreat, an intensity of prayer was birthed out of pastors interceding for each other that was overwhelming. Men of God were in tears, their hearts open, the Holy Spirit moving.
It is imperative that I emphasize that all this took place in an atmosphere in which prayer was the prime driver. Day after day (over a three-day period) God moved us to increasingly higher levels in Him. Only God can do something like that. There is no “cap point,” where a limit is reached in His presence. “His ways are past finding out.”
When we reached the final morning of the retreat, the whole environment was blessed of God. I don’t even have words to describe it. Even if I did have the words, I would cheapen what God did in an inept attempt at a description. Suffice it to say that the pastors and conference staff in that room were all together in one accord. A clear moving of the Holy Spirit was in the place.
My prayer leading up to and during that retreat had been, simply, that I would not get in the way of the Holy Spirit and what He was doing in that “upper room.” And what He did went beyond something manufactured in the flesh; this was clearly a “God move.”
Men and women left with hearts aflame with His presence, and a desire to put themselves fully on the line for His cause.
A Prophecy Fulfilled
I have been reading Joel 2:28 off and on over the past few years, and I’m convinced that it is being fulfilled right now. Those whose hearts are strong toward His heart will be among those on whom the Spirit will be poured out.
Don’t let anyone tell you that all of this is still future, for some marvelous point down the road. It’s happening now; God is moving by His Spirit! I no longer want to be near this mighty move of God that’s happening; I want to experience it in all its fullness.
May God release us from a stale religious experience into a spiritual hunger for Him. And may that hunger become so insatiable that we will all have an Acts 2 experience in our day.
Again, it’s already started.
_________
Fredrick A. Russell is president of the Allegheny West Conference, with headquarters in Columbus, Ohio.