HE PICTURE OF JESUS FAST ASLEEP IN the boat has always been an inspiration to me (see Luke 8:23). The waves are lashing the vessel and it’s taking in water faster than the frantic disciples can bail it out. And even the most piercing screams from their terrified lips can’t be heard above the howling wind and the noise of the crashing waves. Meanwhile, Jesus sleeps on, completely at rest.

How I would like to have a peace like that! But is that possible for people like me—in the middle of all the storms I face?

Through my years of ministry I’ve battled many storms and learned a lot from God, but I’ve always seemed to end up tired and frustrated. Some years ago, however, I asked God to teach me how to experience peace in the midst of calamity. And though excited at the prospect of learning the secret, I inwardly dreaded what God might do to teach me what I was requesting. For how can He teach me to have peace in the storm, unless I go through the storm?

I am not exactly sure how it began, but I was driving to the office one day when I suddenly had a blinding flash of the obvious: I realized that I cannot stop these storms. Tears of relief mixed with joy rolled down my cheeks as it dawned on me that I didn’t have to try to beat them anymore. And for me, this was revolutionary.

From this experience, here are four secrets I’ve learned. 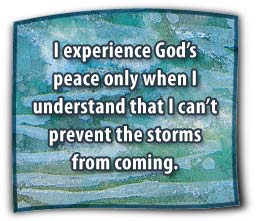 1. You’ll have peace only when you realize you cannot stop the storms from coming. Maybe that seems obvious to you, but it came to me as a bolt of lightning. Storms are a work of Satan. He is the one who stokes the tempests of disunity, criticism, and every other disturbance. And he’s had a lot of practice. How can  I, a mere human, stop him?

I can’t. And here’s the paradox: I can experience God’s peace only when I finally understand that I can’t prevent the storms from coming. We often presume that we’ll gain peace by preventing or stopping the storm. But this is not the biblical view. Peace has nothing to do with whether the storms are big, small, or have disappeared. Peace has to do with our faith in Jesus and whether we really believe that He has all power and sovereign control.

When Jesus calmed the storm, it wasn’t His intention to set us a model for storm-stopping. Indeed, the story concludes with a question: “What kind of man is this?” (Matt. 8:27). And the answer is clear: This kind of Man has access to all the power in the universe. And He’s with you in your boat! While the storm was raging, Jesus lay peacefully asleep. Not because He was unconcerned, but because the storm simply did not bother Him. He knew He was in His Father’s care.

2. Faith is not provided to break our storm, but to give us peace when it breaks all over us.
Another paradox is that God is able to teach us how to have peace only by permitting the storms to engulf our lives. Storms are not permitted so we can demonstrate how strong we are, but to demonstrate that we cannot control our own circumstances. God allows us to encounter them to reveal to us our own weakness and helplessness. Storms bring us to our wit’s end and drive us to our knees in quietness and total confidence in Him who knows all about our turmoil. Our ship may be filling up with water, but Jesus is with us.

“Why are you so afraid?” Jesus asked them after the storm waves had flattened out and the howling winds had become the softest breezes. “Do you still have no faith?” (Mark 4:40). Jesus was not concerned about whether the disciples had power to calm the natural elements. No, He was concerned about why they’d become so scared. Jesus was not looking for storm-calming abilities, but for faith that brings peace—fearless peace while the storm is breaking across our backs.

When a fierce storm arose during Paul’s journey to Rome (Acts 27), Paul did not mount the bow of the ship and command that the waves be still. No, his attitude was different: “The apostle, though himself suffering physically, had words of hope for the darkest hour, a helping hand in every emergency. He grasped by faith the arm of Infinite Power, and his heart was stayed upon God. He had no fears for himself; he knew that God would preserve him to witness at Rome for the truth of Christ. But his heart yearned with pity for the poor souls around him, sinful, degraded, and unprepared to die. As he earnestly pleaded with God to spare their lives, it was revealed to him that his prayer was granted” (The Acts of the Apostles, p. 442). In the middle of that terrible storm, Paul’s faith gave him peace.

God works with us in different ways. Maybe He will calm your storm. But maybe He won’t. As in the case of Paul, maybe God will allow the storm to break your boat in pieces, leaving you to hang on to a plank for a while in the pounding surf. But one thing is sure—God’s purpose is always the same: He allows the storm so as to keep you close to Him. And even while still floating in the water, tired and exhausted, you can have His peace. As God affirms through Isaiah: “Fear not, for I have redeemed you; I have summoned you by name; you are mine. When you pass through the waters, I will be with you”  (Isa. 43:1, 2).

3. Storms are not threats, but rich opportunities for spiritual maturing.
God could have prevented the storm from battering the disciples. But He chose not to, and for a good reason. Says Ellen G. White: “That night in that boat was to the disciples a school where they were to receive their education for the great work which was to be done afterwards. The dark hours of trial are to come to every one as a part of his education for higher work, for more devoted, consecrated effort. The storm was not sent upon the disciples to shipwreck them, but to test and prove them, individually” (Our High Calling, p. 56). One of John Wesley’s experiences provides an example of a literal storm leading to spiritual maturing. While crossing the Atlantic from England to America in the company of German Moravians, a violent storm arose. “John Wesley, brought face to face with death, felt that he had not the assurance of peace with God. The Germans, on the contrary, manifested a calmness and trust to which he was a stranger. ‘. . . In the midst of the psalm wherewith their service began, the sea broke over, split the mainsail in pieces, covered the ship, and poured in between the decks as if the great deep had already swallowed us up. A terrible screaming began among the English. The Germans calmly sang on. I asked one of them afterwards, “Were you not afraid?” He answered, “I thank God, no.” I asked, “But were not your women and children afraid?” He replied mildly, “No; our women and children are not afraid to die”’ (Whitehead, Life of the Rev. John Wesley, p. 10)” (The Great Controversy, pp. 254, 255).

The impression on Wesley by the Moravians’ calmness in the storm was significant and resulted some years later in his attending a Moravian meeting on Aldersgate Street in London, where he underwent his famous conversion. “‘I felt my heart strangely warmed,’ he says [of that experience]. ‘I felt I did trust in Christ, Christ alone, for salvation: and an assurance was given me, that He had taken away my sins, even mine, and saved me from the law of sin and death’ (Whitehead, p. 52)” (The Great Controversy, p. 256).

Such was the consequence of Wesley’s encounter with a physical storm. The spiritual storms are not there to break us; they’re there to make us.

4. When we stop being distracted by the angry storms, we’ll have more time and energy to make progress in our work for God. Since I discovered that I couldn’t break the storms, that this is something God would take care of Himself, I’ve had wonderful peace. I sleep better. I have more physical strength. And I have stronger emotional and spiritual energy to focus on God’s work. The storms are not the distraction that they once were. Sure, they’re not pleasant when they come, but now I have more important things to concentrate on. The storm is not my focus anymore.

But that is not the way Satan wants it. He wants us to become seduced by storms, sucked into fighting and wrestling and becoming frustrated and tired out by them. I know I have done this. In the middle of the night when I would lie awake tossing in bed, I’d rage against the storms, preach against them. And, at least in the safety of my mind, I would have the satisfaction of taking revenge against them.

However, to be focused on the storm tempts us to return the anger, the hurt, the offense. But when we are focused away from the storm, we have the time, the energy, and the determination to become vessels of grace to the hurting—even to those causing our storms.

And the Future?
As we look toward the future, Bible prophecy paints a description of a coming storm that we certainly will not be able to stop. “For then there will be great distress, unequaled from the beginning of the world until now—and never to be equaled again” (Matt. 24:21). Ellen White emphasizes that “angels are now restraining the winds of strife, until the world shall be warned of its coming doom.” “But a storm is gathering,” she says, “ready to burst upon the earth, and when God shall bid His angels loose the winds, there will be such a scene of strife as no pen can picture” (Evangelism, p. 704).

Our challenge today is to learn to weather the storms with the peace God gives.

_____________________
Gavin Anthony was the president of the Iceland Conference of Seventh-day Adventists when he wrote this article. He is currently the director of discipleship and youth ministries in the same conference.