He's Never Failed, and That's the Way It Is

T WAS MAY OF 1970. I STOOD WITH MY FATHER in the middle of a hayfield. The wind was blowing, sand drifted across the field, and the newly seeded hay looked pathetic. With his arms around me, Dad said, “Cassie, it’s going to be this hayfield that gets you and your sister into Walla Walla College this fall.”

My heart sank. There seemed to be no way this sad hay would pay for two kids to go to college that fall.

But each morning before my siblings and I took the hour-and-a-half bus ride to school, Dad, my brother, Andy, and I would go out and irrigate hayfields.

Later that summer, a family friend on leave from the mission field in Africa was visiting and talked about needing money to help build churches there. I heard Dad tell Mom to write a check to cover the cost for a certain number of churches.

A couple of weeks later, a tape from the Voice of Prophecy was played in church, asking for help so they wouldn’t have to shut down some of their programs. I heard Dad tell Mom to write another check. By then—with that sick-looking hayfield, the mission churches, and the Voice of Prophecy—I knew there was no way Debbe and I would be heading to Walla Walla College that fall.

But when September came, we packed up the station wagon for the trip to College Place, Washington. As we were loading, Dad came to the front door and told us he had just sold that hay—and for the highest price ever.

In the intervening years, those few hayfields in Indian Cove, Idaho, paid not just for me and my four siblings but also for a string of nieces and nephews to earn a Seventh-day Adventist education.

Years later, when the vice president for finance asked me to work in Student Financial Services at the college, I told him I would commit to two years. Later, I told God that I would stay in it for the long haul if He met one condition: that He would always—not most of the time, but always—provide the resources students needed so they could come to college.

I conceded that the students would need to work and earn decent grades and that the parents would have to contribute what they reasonably could. (Throughout the years I’ve learned that in many situations parents can’t provide—but God does.)

Those were my terms. I said, “God, the minute you don’t meet that commitment, I won’t be able to do this job anymore. And that’s the way it is.”

Thirty-two years later, that’s still the way it is. God has never once failed me on this.

My Doubt—His Miracle
A few months ago—with long hours in the office, too little sleep, and shortened time spent one-on-one with God—I was certain He was failing me. In my office was a senior girl who had only two quarters, or terms, left in school. She was a good student and a hard worker whose parents had done their part. But the resources were gone. It was getting close to noon, and I suggested we spend the lunch hour praying about the situation and meet back in my office at 1:30.

I went home to the little room where I have my devotions and asked God why, after all these years, He wasn’t providing the resources needed. As I got up from praying, I bent over to pick up my study materials that were still lying on the floor after my morning devotions. My eyes were drawn to The Desire of Ages by Ellen White. It was open to page 371, where two sentences jumped out at me: “If the work be of God, He Himself will provide the means for its accomplishment. He will reward honest, simple reliance upon Him.” Wow!

I went back to work and told the girl what had happened. I told her I didn’t know where the money was coming from, but that God knew. And I gave her clearance for the next two quarters. I had to wait about three days for God’s resources to come through. A letter arrived in the mail with a rather large check and a note saying, “Thought maybe someone needed help. Use as you think best.”

Coming Through for Christmas
One December I received a call from a regular donor I’ve dubbed my “telephone buddy.” His daughter had called him a few days earlier and told him a story about an orphan boy and then asked him what he thought needy students were doing this year for Christmas.

It started him thinking, and that’s when he picked up the phone and called me. He asked how much money I’d need to make sure all the “poor students” at the college had something for Christmas. I told him I’d need $100,000—in addition to a significant sum I’d asked him for earlier. The money arrived three days later.

The Kindness of Strangers
We had an international student at the college who was being sponsored by an American family while working on his graduate degree. I never knew why, but the family pulled their sponsorship. The young man had two quarters left and absolutely no resources.

I called the student in and discussed the situation. We agreed to meet again in three days and to keep the matter before God in the meantime. Before the student left my office, I had him call all his family and ask them to pray. I called my folks and asked them to pray too.

Two days later I received a message to call a local elderly woman. I knew she had hearing challenges, so I went to see her instead of phoning. When I got to her apartment, she said, “Cassie, yesterday I was trying to take a nap. I lay down three different times and got up three different times. Three times  I had the strange feeling that one of ‘Cassie’s kids’ needed help. So I called your office. After I made that phone call, I was finally able to sleep.”

She asked me if there was a problem, and I told her about this young man. She asked how much I needed. I hesitate to tell elderly people how much I need, fearing that out of their generous hearts they will give me more than they can afford. So I answered, “Whatever you feel you want to do.” She went into her bedroom and came out a few minutes later with a check for the amount that two days earlier I had estimated the student would need.

My Perception Transformed
Not too long ago we had another international student finishing her undergraduate degree who wanted to continue her education and complete her master’s degree at what is now Walla Walla University. 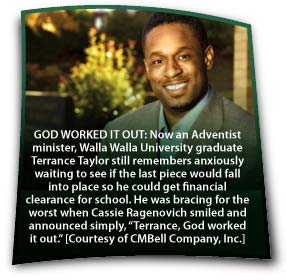 We faced three problems with her. She had no money. She was not eligible for U.S. aid. And, frankly, she drove me bats. I really like people, and I really like working with our students, but I confess, I found it difficult to like this girl.

One day after another meeting with her, I went home and talked to God about the situation. I told Him that if He wanted her to get her degree here, He would have to change my heart. I asked Him to help me think of her at the same time each day. I reminded Him that I didn’t have time to make a lot of contacts and raise all the funds this girl would need, so He’d have to provide the resources with just one phone call from me.

Guess what happened. I started liking this young woman and began looking forward to her coming into the office. For several months, she was on my mind every morning at 7:15. And  I made a phone call—one call—asking a friend to sponsor this student. My friend’s response was, “If you think this is a really important investment, we’ll send the money.” I said I did—and I meant it from my heart.

They sent the money, but what amazes me most about this story isn’t how God provided financial resources, but how He could take this sinful heart of mine and show me how to love that precious girl of His.

Just What We Need, Just in Time
Winter quarter financial clearances are the most difficult. Summer savings are usually depleted, and taxes are around the corner for parents. As I crawled into bed at the end of a long day, I was thinking about the seven files I’d left on the corner of my desk—and of those seven students who had not yet received financial clearance. Each kid was working, getting reasonably good grades, and the families had done their part. There just weren’t enough resources.

I couldn’t sleep. So I prayed all night about those seven files. Finally, at about four in the morning, I decided to get up and go to work.

When I arrived at the office, my private phone line rang, and the person on the other end said, “Cassie, my wife and I were going to make a major purchase yesterday, but as I was getting ready to pay for it, I told my wife, ‘I don’t feel good about this. I think someone like Cassie may need some help.’ I just wanted to tell you I put a check in the mail.”

That check was exactly the amount needed to keep those seven students in school.

Our Part in His Providence
Not every story that comes out of our office is a miracle story. We all hear about students who say Adventist education is prohibitively expensive. Without a doubt, Christian education is an investment that requires sacrifice on the part of most families. But what I’ve seen and experienced convinces me that if a student works and earns decent grades and the family contributes its portion, God provides the rest.

If getting our students here is that important to God, Seventh-day Adventist higher education must be tremendously significant to Him. That makes me proud to work here. The challenges are great; that keeps me dependent on Him. The rewards are unparalleled; that makes me grateful.

The God of the universe takes a personal interest in what happens on this campus. He knows the story of that difficult student sitting across from me. He gives me a front row seat to the show of His limitless power in action. He allows me to represent Him despite how well He knows my failings and my flaws. He lets me play a part in fulfilling His plans for the students and families He brings to Walla Walla University. He holds us—that student, those parents, and every one of us—in the safety of His hands and the center of His heart. It simply astounds me.

In 32 years of working in Student Financial Services and in a lifetime of testing and trusting His providence, He’s never failed. And that’s the way it is.

Release
The Value of a Spiritual Mentor
At Union College, students and mentors build a community that makes faith the foundation of learning.
Release
Adventist Hospital Expands Services in Trinidad and Tobago
Upgraded dialysis chairs and in-patient rehab center among the recent improvements.