As Good as Its People

ne of the few memorable lines from recent American presidential campaigns was Jimmy Carter’s oft-repeated pledge in the 1976 election that he sought to give the United States “a government as good as its people.” Quite apart from whether you believe that Carter as president succeeded in that goal, the line lingers on the edge of the memory, reminding an increasingly cynical populace that there was a time when politicians could still win office by appealing to citizens’ core sense of decency, competence, and altruism.

Jimmy Carter’s line has been floating through my mind often  in recent weeks, not only because Americans are again in the midst of a dispiritingly caustic election campaign, but because it echoes a goal that has been slowly forming in this editor’s mind over a challenging first 12 months on the job: to give the Adventist movement a magazine as good as its people.

There is no way to do as I have done this past year—travel nearly 200,000 miles by air and car and rail, meeting thousands of believers in churches, camp meetings, conferences, and retreats—and not be profoundly moved by the core qualities of the Adventist people. 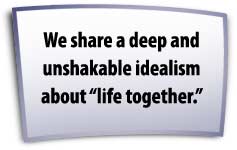 My confidence in God’s remnant church grows each time I get to pray with a seeker after a sermon. It blossoms each time I see the pervasive hope and optimism of believers gathered for worship, each time I learn about the thousands of unheralded believers who are serving their communities and churches as volunteers. Cynicism about the future of Adventism is bred in fluorescent-lit offices where problems mount up and solutions seem far distant. God has let me see a different church.

Give me the joy I have seen on the faces of the Adventist kids I’ve met in Sabbath schools, school chapel services, and on service projects. On the days I feel like complaining about my workload, let me remember the unpaid deacon in Buffalo who arrives at church two hours early to shovel last night’s 20 inches of snow. When I’m tempted to critique some peer in ministry for the way a  sermon was put together, let me recall the kindness of the thousands this past year who lent me their ears and their hearts as I struggled to convey the hope I find in God’s Word.

I can testify that the heartbeat of this people is deeply warm and powerful, even when we fail to be all that the gospel calls us to be in relation to one another. One of the reasons we find it so tempting to flay “the church” for its mistakes is that we share a deep and unshakable idealism about “life together.” We believe at baseline not only that we are called to be a band of brothers and sisters but that it is possible to live this way—to lift one another up when we sorrow, to intercede for one another when we are sinful or discouraged, to challenge one another to daily transformation and holy living through the power of the indwelling Christ.

The magazine that has bound this people together for 159 years must share these same essential qualities if it is to continue its historic role of uniting the far-flung world of Adventism.

If this magazine does these things, it will be worthy of the trust of the good people who read it and whom it serves.