o celebrate the coming of summer and escape the heat, my husband, Larry, and I loaded the canoe onto the 4Runner, packed up food and the grill, and headed up central Oregon’s Cascade Lakes Highway. Larry’s coworkers had told him about a great canoeing spot, so we watched for the small sign that read “Hosmer Lake” and pulled off the main road.

When we arrived at the boat dock I was a little disappointed. Hosmer was a reedy little pond, already packed with fishermen paddling around the water in their waders and inflatable boats.

“It’s too small! Won’t we get in the way of the fishermen?” I asked Larry. I was very tempted to pack it up and go to another larger, better lake. 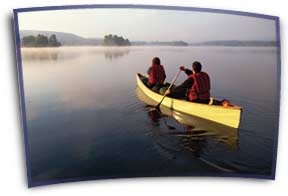 We slipped the canoe into the water and aimed ourselves toward the far side of the lake. Wondering whether we were annoying our pond neighbors by keeping the fish from biting was not a relaxing experience. But as we arrived at the other side, it became apparent that the lake wasn’t ending yet. A narrow channel headed off between the trees. And so we began our circuitous route through Hosmer Lake. Each new bend seemed to bring us to the end of the lake, only to open up yet again to a whole new vista.

At one point, as we paddled through some reeds, a mother duck and her six ducklings were frightened into a fuzzy duck frenzy. We heard the call of a bittern, a water bird that camouflages itself in reeds by pointing its beak up to the sky. It sounded like a deep panpipe or water sloshing against plastic. And we could see lots of large fish swimming underneath the surface—though the fishermen we ran across claimed they weren’t having any luck.

When we finally pulled our canoe out of the water, I was refreshed and rejuvenated, with a far different opinion of Hosmer Lake from when I began.

A Worship Experience
These recollections bring me to a particular morning when I sat down in my worship corner. Even after several weeks, perhaps even months, of shallow swishing in my Bible and journal, worship was still something I “did.”

I had barely written the date in my journal and greeted my Father with a “Dear Lord” when I was struck with a strong desire to be done. My stomach growled. What should I fix for breakfast? I wondered. Then I noticed that a breeze had swept all the bills from the counter onto the kitchen floor. I really should get those paid.

But I had wanted to record thoughts and events of the day before, so I scribbled a few sentences. Then my eyes were drawn back to the clock. Have only 10 minutes passed? I really should stay for at least a half hour.

I pulled my Bible off the end table, found a few interesting verses, and wrote them down. I shifted in my chair. Might as well be comfortable since I’m here for 10 more minutes. I began to breathe more freely, and I smiled as I read texts that were perfect for me that day. Next, I dusted off a book I hadn’t opened for at least a month. Filled with scriptural quotations and my own underlining and scribbled comments, the book ministered to me right where I was that day. I couldn’t believe my eyes were tearing. It had been too long since I had felt anything during worship. “Thank You, Lord,” I said.

I glanced at the clock. It had been an hour and five minutes since I had sat down. As I stood up and straightened the pillows, I realized I wasn’t hungry at all. I was satisfied.

Back to Hosmer
Just like Hosmer Lake, the thoughts of God are deep and unexplored. And just like my canoeing trip, I had to paddle across what I could see to reach what was unknown to me. Early on, I was ready to leave. But when I stuck it out, paddled across the lake, read the Word even when I felt nothing, that’s when the rewards and discoveries began to flood in. Don’t look at the lake and say it’s too small.