he carpet vibrated under my bare feet. It felt like a caravan of trucks rumbling past, or how  I imagined an earthquake would feel. But it can’t be, I thought. An earthquake seemed too cliché. I had only just moved to California. And yet, here it was. As the shaking continued, I walked into the kitchen and peered out the window. Was the whole world moving or was it only me? I caught a glimpse of swaying trees before the ground abruptly stopped shifting.

When I moved to California, everything shifted. I was thrilled with a job teaching at La Sierra University, but relocating meant changing my life. I had to leave friends, favorite bookstores and restaurants, the co-op grocery store in uptown Minneapolis, the Mississippi River. In Riverside the hills were scorched from a long drought and the sky was hazy. When I drove on the freeway, I wondered, Where is everyone going?

Change is difficult. I had become accustomed to my rituals, my way of doing things. They weren’t necessarily better; they were simply more comfortable. If I was going to flourish, however, I would have to be open-minded. I would have to adapt to a new landscape, make new friends, find new haunts. 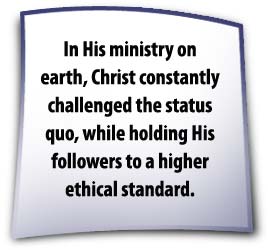 Change is hard, but it’s not a natural disaster. Progress has done much to improve our lives. Think of penicillin. Think of airplanes. When I was 20, I first heard of a strange new phenomenon called “e-mail.” A few years later, I heard people talk about “surfing the Net.” It sounded complicated.

Today, I read the New York Times online.  I call my sister in South Korea with Skype.1 I send mass e-mails to my students, reminding them of an upcoming assignment. And if I want to know who wrote “Mary Had a Little Lamb,”  I can google the phrase. (It was Sarah Hale.)

The Internet is not strictly an agent of good. It has also brought us forwarded jokes, e-mail scams, and online predators. And one cannot ignore how the Internet has damaged the finances of newspapers as more and more people (like me) get their news online. It would be unfortunate, though, to balk at this new technology.

As a church, we shouldn’t reject something—be it music or a form of outreach—simply because it is new. Our church began because a group of young people resisted rituals and traditions. Ironically, 150 years later, we have developed our own rituals and traditions that sometimes discourage young people from trying new things. Many conversations in churches have ended with the phrase “Well, that’s how we’ve always done things”; or its sister statement, “That’s not how we do things around here.”

I sympathize with those who worry about sliding standards. Adventists have a distinct culture, and it’s undeniably changing. I don’t wish to argue for or against these changes. I merely want to acknowledge that these changes concern many church members. They wonder, Are we compromising our beliefs to become more like the world? It’s a valid question—one we must ask.

But we also have to be careful about holding on to something simply because it’s the way we have always done it.  In His ministry on earth, Christ constantly challenged the status quo, while holding His followers to a higher ethical standard. He was not impressed with rote rules or rituals. Sabbath observance at the time was particularly intricate. Christ responded by healing on the Sabbath and allowing His hungry disciples to gather some grain for food. “The sabbath,” He said, “was made for humankind, and not humankind for the sabbath.”2

Christ wasn’t advocating a watered-down religion. In fact, He expected more from His followers. He asked the rich young ruler to sell everything, give the profits to the poor, then follow Him.

As we respond to a changing world, let’s not fear change. Instead, let’s embrace positive transformation. Let’s resist a lukewarm, going-through-the-motions religion and look for something deeper.