O RECORD EXISTS OF ELLEN WHITE BEING motion-picture filmed or having her voice audio-recorded1—modern technological innovations already established during her lifetime. Her office is known to have used the telephone, however.2 Had she lived long enough, it is likely she would have embraced every innovative, legitimate means of communication. After all, during her long lifetime she personally witnessed the transition from hand copying all her written correspondence, articles, and book manuscripts to reproducing these materials on the calligraph, or typewriter, as early as the summer of 1885.3 Mrs. White neither enjoyed the creature comforts of steam central heating at her Elmshaven office/home in California until 1913,4 nor of electricity until January 1914, when all of the surrounding Pratt Valley got “wired.”5 But the technological advancements she mostly experienced and embraced involved transportation.
It Beats Walking
Mrs. White had long before made the transition from arduous transportation by horse and carriage or open sleigh over body-torturing rough logways and mud sloughs6 (or by canal boat when railway fares were too expensive) to that of “riding on the cars” (passenger train travel).7 The transition must have seemed heavenly. One early train trip was in May 1854, bound from Michigan to Wisconsin, but the train was only about three miles out of Jackson when a terrible crash ensued. The lives of Ellen and her husband, James, were spared through the providence of God, but four other passengers on that ill-fated train unfortunately perished. The Whites, saddened but undaunted, boarded another train in Jackson the very next afternoon and completed their trip west.8

Ellen White is known to have taken at least 13 automobile rides in her twentieth-century years. Her first car ride ever (on January 13, 1902, in Chicago), oddly enough, was endured in a recumbent position. It seems that the W. O. Worth model was shaped somewhat like a covered streetcar, with seats running along each side. Wheelchair-bound Mrs. White explains that “it was great relief . . . to be able to lie down.”9 While she was in the Los Angeles and San Diego area in 1905, she experienced three car rides with a Brother Johnson operating his own conveyance. Her reaction: “I enjoy very much riding in the automobile.”10
We next hear of her arriving at the 1908 Los Angeles camp meeting with Sara McEnterfer and Minnie Hawkins—courtesy of a driver by the name of Brother Crocker.11 The next year she popped up with Sara and son Willie at the new Wabash Valley Sanitarium in Lafayette, Indiana—in a car driven by Dr. W. W. Worster, the institution’s medical superintendent, and H. C. Saunders, its business manager.12
Again in Los Angeles in 1910, we find our intrepid messenger of the Lord this time in a car with E. E. Andross, Southern California Conference president, and John Wessels, business manager of the Glendale Sanitarium.13 Around the same time, we read of her being driven from Los Angeles to Glendale by an especially accommodating church brother. Not only was this unnamed member kind, but, writes Mrs. White: “We had the utmost confidence in his skill in managing his machine.”14 About the same time, she describes a similar experience with an unnamed man who took special pains to chauffeur her from Glendale to Los Angeles.15
In 1911, traveling from San Fernando to Los Angeles, Mrs. White briefly describes her experience: “Elder Andross took us in an automobile to visit the several churches and the Bible Workers’ Home in Los Angeles. We did not get out of the conveyance, but stopped and spoke to some of those engaged in the work. It was a very pleasant trip. . . . The automobile was an easy-riding machine that did not jolt me.”16
Travel for Business and Pleasure
Sometimes cars were used to convey Sister White to other connecting, long-distance transportation. This was the case later in 1911, when “a brother who is always ready to place his automobile at our disposal” dropped her off in Nashville for her return trip to St. Helena.17 This last statement gives rise to the justifiable supposition that Mrs. White may have taken many more automobile rides than have been documented in writing. Perhaps by now you have also detected a common thread running through these accounts: Ellen White enthusiastically utilized the modern conveniences at hand to further the Lord’s work. 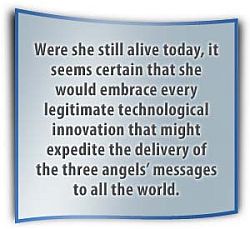 By 1912, the five-mile section of road between San Bernardino and the Loma Linda Sanitarium in Redlands afforded an unusually smooth trip.18 But the final car ride we hear about must have caused Mrs. White to ponder what the future had in store for the rising generation. On home turf in the St. Helena area, she shared a rare purely-for-pleasure ride with son Willie’s twin boys, Henry and Herbert, in their jointly owned, snazzy Model T Ford19—and this in 1913 at the age of 85, slightly less than two years before her death.
In thus reviewing the manner and speed with which she adapted to change, we have before us compelling evidence that Ellen G. White was truly a woman of her times. Were she still alive today, it seems certain that she would embrace every legitimate technological innovation that might expedite the delivery of the three angels’ messages to all the world. After all, she was a Bible-believing Christian, and the Bible says in “the time of the end . . . many shall run to and fro, and knowledge shall be increased” (Dan. 12:4, KJV).
Just as did Mrs. White all her long life, may God help us today to take all the tools He has given us and use them for His glory.
______________
1E-mail correspondence with Tim Poirier, vice director, Ellen G. White Estate, September 5, 8, 1998.
2She mentioned phoning the Echo Publishing House office in Melbourne locally about February 6, 1894 (Letter 88, February 6, 1894, in “The Fannie Bolton Story,” p. 123), writing simply: “Our mail has not come, [it] is at the Echo office—will come tonight, have telephoned for it.”
3The first mention is in her diary while en route on the S.S. Cephalonia from Boston to Liverpool, August 7-18, 1885. See Ellen G. White: The Lonely Years, vol. 3, p. 291.
4Ellen G. White: The Later Elmshaven Years, vol. 6, pp. 378, 410.
5Ibid., p. 402.
6Testimonies for the Church, vol. 1, p. 94.
7Husband James records a train trip the Whites took together as early as March 1849 (James White letter to Brother [Leonard] and Sister [Elvira] Hastings, March 22, 1849, in Ellen G. White: The Early Years, vol. 1, p. 159). Her son Willie recounts trips she made with James by canal boat between 1846 and 1848 (William C. White to Marion Crawford, May 7, 1912, in Ellen G. White: The Later Elmshaven Years, vol. 6, p. 367).
8Spiritual Gifts, vol. 2, pp. 189-191; Ellen G. White: The Early Years, vol. 1, pp. 294, 295.
9Letter 11, January 28, 1902, in Manuscript Releases, vol. 6, p. 255; Ellen G. White: The Early Elmshaven Years, vol. 5, p. 144.

____________
Jerry Stevens is a retired editor in chief for Christian Records Services for the Blind and the current editor of Adventists Affirm. He lives in Fairfield Glade, Tennessee.

Cliff's Edge
His Wounded Hands
How well will we fare when, with “terrible exactness,” every “secret thing” comes under scrutiny before God?
Transformation Tips
Ellen White in Her Senior Years
Ellen White modeled positive principles of helpful service for all generational groups.
Magazine Article
Mary’s Prayer
The messenger had promised the Child would be Immanuel! God with us!