ECENTLY I INVITED ONE OF THE nursing assistants at work to visit our church—several times. Whenever we had a special service or some especially good performance scheduled, I invited her to attend. But she never did.
Oh, we’d have good spiritual conversations at work, but when it came down to her showing up for the 11:00 service, she was always a “no show.”
Did that bother me? Honestly, yes; it did bother me that Deidre* didn’t show up.
On One Hand
I guess part of the reason this annoyed me was that I’d been stood up before by several others, on several occasions when I had invited them to visit our church. I’d really sooner someone just give me a flat out “No” than string me along as though they’re coming. It’s disheartening and discouraging to expect someone to show for church and then not have them show at all.
A few years ago Joan promised and promised she would come. Then one day I saw her standing near the church parking lot, wondering whether she should come into the sanctuary. When she noticed I’d spotted her, she came inside somewhat hesitantly. She had been taking Bible studies in the evenings and felt she was ready to get baptized. Three Sabbaths later she was. It was beautiful seeing Joan stand in the baptismal font, but that was the last time I saw her in church. 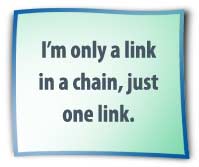 Oh, I’d see her at work. And she volunteered that she was going to come back to church. But she never did. There have been quite a few other people with whom I had spiritual conversations where I have worked. And when I invited them to come to church, many have told me they’d come—sometime. For many, however, that time never came.
Then around New Year’s, Deidre mentioned that she was making a New Year’s resolution to start going to church. She hadn’t gone for years on a regular basis and so she asked, once again, for directions to my church. As I gave them to her, a nurse overheard our conversation and seemed interested as well. So I gave her directions also.
I was thrilled to be giving directions to two people at once. I even started daydreaming about how neat it would be if they actually showed up. But I guess I’m too much of a cynic; deep down I didn’t believe either of them would come to church. And if they did, I found myself surmising that they would go no further than Joan. I know this is the wrong attitude, but it seems that it’s the only attitude I’ve been sporting lately when it comes to witnessing.
On the Other Hand
Then a couple nights ago, God impressed me with a thought. He took my mind back to my own conversion at the age of 19.
The summer before I was baptized, Duane, a young man about my age, had been instrumental in helping me accept Christ. I had always argued passionately in favor of the theory of evolution, but he patiently witnessed for Jesus. When I finally accepted the Lord, our paths had parted, and it was two years before I would be able to thank him for introducing me to the Savior. Duane was a link in the chain of people and events that brought me to the Lord. 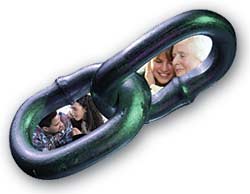 Another link was a woman at the health food store. She began witnessing to me right from the start. However, it was another eight months before I actually set foot in an Adventist church.
As I thought of these two individuals, my mind went back to a host of others who were also partly responsible for my conversion, the first being a girl my age who had invited me to a church of another denomination when I was only 6.
It seemed that God was trying to help me understand that I’m only a link in a chain, just one link. And that’s all God needs me to be. Most of us don’t come to Christ after coming in contact with the first link. Our conversions frequently involve many other links as well.
God even awakened me to the fact that He has something to do with the conversion process as well. It’s the Holy Spirit who woos the hearts of sinners (John 16:8; 14:26; 15:26; 16:13). How self-centered could I be?
When most of us came to the Lord, it wasn’t a one-shot deal. Most of us were approached by several people before something finally clicked and we found ourselves sitting in a pew, and eventually standing in the baptistry.
In God’s Hand
At the time, I didn’t know whether my friends Deidre and Candace would join the Adventist Church. I wasn’t even sure whether they would come to church that week. But that was not my concern. All I needed to know was that I was a link in a chain. I might not be the first link; and I might not be the last link that encourages them to come closer to the Lord. But I’m the link that God was using right then.
And should either of them decide not to accept my invitation, it’s not my fault. Jesus Himself witnessed to many who did not accept Him. I can only do as He did. I can merely give the invitation and let the Holy Spirit take it from there. I am only a link in the chain, nothing more, nothing less.
Maybe I’m one of the middle links. Perhaps people have been approached by others who have stimulated their interest in the truth. And it’s entirely possible that I will be just another of the many persons they will come into contact with as more links in the outreach chain speak just the right words to bring them to Jesus and His truth.

I don’t have to trouble myself with whether these two women will accept Christ, or even the Adventist message. That job belongs to many others as well, including the Holy Spirit. I am here merely to assist the Lord in any way that I can for these two souls in their journey. My job may be small, but my purpose is not insignificant.

Epilogue
By the way, I found out that Joan finally started going to the church I had attended in a neighboring city. She is now a member in good standing, attending church each Sabbath.
Deidre never did come to church that Sabbath, nor did Candace, who overheard our conversation and asked for directions. However, Deidre did start attending church a few months later. And at the end of an evangelistic series at our church, Deidre was baptized into the Seventh-day Adventist Church. These two outcomes inspired me to contemplate those five words that Jesus used three times in Matthew’s Gospel: “O ye of little faith.”
I am constantly amazed at how God performs miracles and wonders. Lately I have been crossing paths with Candace, the nurse who overheard my conversation with Deidre more than a year ago. In the back of my mind I rather doubt that she will ever come to our church. But I’ll just trust God on this one.
______________________
*Not their real names.
____________________________________
Ron Reese, a former schoolteacher, works as a nursing assistant and writes in his spare time.
Advertisement
Advertisement