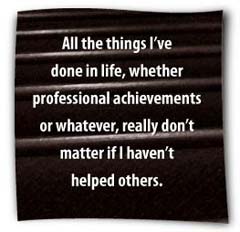 Deborah Metcalfe might easily say, “I’m too busy.” Instead she takes on a role that may seem daunting for some by organizing a community services department for her church in Zephyrhills, Florida, by partnering with existing area help agencies and orga-nizations. Metcalfe is president of Options Management and Consulting, Inc., in Zephyrhills. Betty Kossick, a freelance writer and a feature article writer and columnist for Zephyrhills News, talks with Metcalfe about service, mission, and commitment. Both Metcalfe and Kossick are members of the East Pasco Seventh-day Adventist Church in Zephyrhills.
Kossick: Each CrossWalk issue of the Adventist Review zeroes in on discipleship. How do you see community services fitting in with that commitment?
Metcalfe: Discipleship, when referring to Christ, is following His teachings—and His teachings on how we should treat the poor and needy are very clear.
What is your personal philosophy about discipleship?
While I don’t believe we are saved by works, I do believe that in certain areas—such as how we relate to those in need—we have a biblical mandate. Matthew 25 teaches that at the end of time Christ will separate the people, “one from another as a shepherd separates the sheep from the goats . . . on his right and . . . on his left” (verses 32, 33). That separation of the two groups will be based on how each of them treated or did not treat the hungry, the naked, etcetera, because Jesus says, “Whatever you did for one of the least of these . . . you did for me” (verse 40).

Was there a trigger experience that spurred your current community service thrust?

I think I’ve always had a heart for the poor. Even when I was a little girl, I remember being sensitive to people who were hurting because they didn’t have enough money or food. But what really started my interest is that I began in the early nineties to read a lot about church history. At that time there were several church historians who had published works on the life of Ellen White from a slightly different perspective. They focused on her life as a mother and wife—even as a professional woman in a man’s world—not just as a prophet or messenger. I became fascinated with these stories. As I studied her life, I was particularly impressed with the way she related to the poor. For example, she sewed all her family’s clothing, including her husband’s suits. The fabric she would purchase—supposedly to make dresses for herself—she would often instead use to make something new for some poor woman while she continued to wear old clothes. And she often took people in need into her home.

So, I was feeling impressed to do more for the poor when I attended a camp meeting in Florida and heard Dwight Nelson preach a sermon titled “Repairers of the Breach.” His focus was on Isaiah 58, which teaches about not only how we should treat the poor but the benefits we ourselves can expect to receive. For instance, it says if you share your food with the hungry and satisfy the needs of the oppressed, “your healing will quickly appear,” and He will satisfy all your needs.
In the past the Dorcas societies, later known as Community Services in the Seventh-day Adventist Church, have worked independently from other community agencies. Why do you see the need to join hands?
At first, it was a matter of practicality. We had no space at our church for a room or a building of our own. That’s one of the reasons the church here in East Pasco didn’t pursue the development of a community services department.
I felt that if we researched what others in the community were doing, we could work effectively with them while not duplicating services. It’s been an amazing opportunity for us to witness and to share what Seventh-day Adventists are really like. There are still a lot of misperceptions out there. We get to know people of different beliefs; we’re able to do more financially. We can actually help more people on a larger scale.
How has the church family at East Pasco responded?
They’ve been very supportive in volunteering their time and resources and becoming involved in various ways. We have one group that serves several organizations by making baby clothing for needy moms-to-be. Some of our members serve at a community soup kitchen that’s sponsored by the local ministerial association. And a big part of our program has been to respond to individual calls for help. We’ve had referrals from Florida Hospital Zephyrhills and the public school system. We’ve also worked with Habitat for Humanity and the Marine Corps’ annual Toys for Tots drive. Our youth group also participates in some of these activities, and I’ve been blessed by their willing spirit.
What is the response from the community agencies and the recipients of help?
Both are filled with gratitude. An example: We’ve established an informal partnership with a local ministry known as His Storehouse Outreach. We’ve done several joint efforts with them. Recently, they referred to our church as “the best friend we have.”
How do you feel your profession lends itself to this kind of community service?
I’ve been in leadership positions most of my career. Currently, I’m a health-care management consultant. One of my main projects is working to build greater access to health care for the needy. There’s a crisis in our country related to a growing number of people without health insurance. Therefore, many don’t have access to quality health care. It breaks my heart to see people delay critical treatment they often need because of their inability to pay.
What future community partnership plans do you see East Pasco Seventh-day Adventists involved in?
I know a lot of church members would like to see us have our own designated space. But I like the connection we have with these other groups—it’s more practical. I’d like to see us continue to work with community organizations as a witness and outreach opportunity.

How does the work you do affect and fulfill your life as a disciple, or follower, of Jesus?

It’s definitely gratifying. I was formerly a nurse, and that was a helping profession. I believe that one of the most important functions we have is to help others. It’s the main reason the Lord put us here. All the things I’ve done in life, whether professional achievements or whatever, really don’t matter if I haven’t helped others. What I’ve found is that a lot of other people in our church share the same passion for community service; they just needed someone to step up and get the effort started. I was already feeling the call when I heard that message by Dwight Nelson. That just sealed it for me.