ISTY MORNINGS. QUIET COUNTRY roads. Pine forests. Frogs croak in swampy areas. Wild morning glories drip with dew and splash color along the edges of the cotton, peanut, and soybean fields. It’s a beautiful drive down to Yale, Virginia, but as you approach, you soon realize this is no university town.
Thirty miles past the last grocery store and seven from the last gas station, the shape of a quaint little church begins to emerge from the fog. Nestled out back of the old cemetery is a spacious, two-room school with a gym, kitchen, office, and well-equipped playground.
When I pull into the gravel drive and shut off the car engine, I can actually hear the flock of sheep across the road chewing their cud and occasionally baaing softly to one another. Who would build a school in a place like this?
Well, a couple of generations ago some Russian immigrants settled in this fertile farm and forest land. Not long after accepting the three angels’ messages and joining the Seventh-day Adventist Church they started a little school. That was 60 years ago. Costs were high, and numbers of students were low. Teachers were hard to find, and the school closed for a few years. It reopened 45 years ago, and dedicated teachers have nurtured small numbers of students here ever since. Through the years, most of the young folks have moved on to other parts of the world. But the parents, grandparents, and great-grandparents have continued to sacrificially fund this little school as an outreach to their community. This year the doors of its two classrooms opened again to about 20 students—almost all of whom are not Adventists. As they enrolled, they joined the largest evangelistic event in Adventist history.

This evangelistic series spans the globe, operates in every time zone, for six to eight hours a day, five to six days a week (not counting extracurricular activities), for 9 to 10 months each year. Hundreds of thousands of students and their families are influenced on a daily basis.
Does it work? Well, according to Garland Dulan, education director for the world church, last year 30,422 students in Adventist schools were baptized around the world. If we were talking about churches, that would be two new churches of 50 members every weekday of the year. And those figures don’t count the schools’ influence on the families of those students.
Almost All Non-Adventist
For the little Yale church, the sacrifice has been extreme—sometimes almost overwhelming. Has it been worth it? Read what Becky Muñoz, one of the recent teachers, writes:
It all began when Pastor Jimmy Muñoz returned from a three-week evangelistic series in the Dominican Republic. Armed with pictures and stories, he presented a slideshow to the students in both the upper- and lower-grade classrooms. At the end of the slideshow he asked the children if they knew Jesus as their personal friend and if they could be certain of their salvation.
Seventeen students attend the two-teacher school, and none of them were Seventh-day Adventists. The church had no school-age children, but it actively recruited the tiny community to find as many students as possible—often helping some of the poorer families with at least part of their tuition.
When Pastor Jimmy asked if any of the older students (grades 4-8) would be interested in learning about baptism, we were shocked at the unanimous response. Mary Jewett (the upper-grade teacher) asked me (the lower-grade teacher) about starting a Bible doctrines class. After some discussion and planning the date was set. 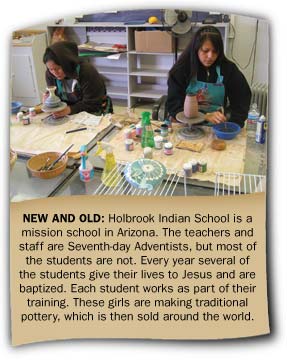 In order to be respectful to all the students the Bible doctrines class was set up as an optional class just before lunch during the regular social studies block. A letter was sent home, and I began preparing the lessons. I agonized in prayer about what to present and was impressed to begin a Bible marking course and to brainstorm with the students about topics they might want to understand better.
Imagine my surprise when 11 of the 13 upper-grade students came to the first class. By the second week all 13 were ready and waiting. Seeing the need for Bibles that were easy to understand, the church family took it upon themselves to provide brand-new Bibles for all the students. The class met in a small room above the gym. Everyone grabbed a seat on
old couches or lounged on the floor. There was rarely a dull moment as the students yelled out answers, read Bible texts, or asked difficult questions.
We followed the interests of the students and covered topics such as the authenticity of the Bible, the origin of sin, the fall of Lucifer, salvation, Christian behavior, music, etc. Interest was high, and the students always begged for more time and longer sessions.
Church members who visited often observed, “The Spirit of God is very evident in that tiny ‘upper room’ of the gym.” The school board chair and his wife took all the class members ice-skating and then to Pizza Hut. The impact this had on the children was lasting; many of them still talk about it and how it influenced their decision to begin attending church.
After a year of intense Bible study the students still asked for more. So we decided to begin the new school year with an after-school class. We studied the Discover Bible lessons, the teen baptismal lessons, and a Daniel and Revelation series over two years.
Six students were baptized, as well as three of their parents. Now our school is a mixture of Adventist students and non-Adventist students. Those who are baptized clearly see themselves as missionaries to the others, and to their families.
Dolores
Teachers, school boards, and churches may not know till heaven the true impact of their self-sacrificing love. But LaVona Gillham, associate director of education for the Columbia Union, has also seen many times when that impact is amazingly apparent. This is just one that brings tears of joy to her eyes every time she thinks of it:
Walking into Mary’s classroom that October morning, I immediately noticed the new student sitting at the back of the room. It was hard not to. She was large for her 13 years, much larger than any of the other nine students in this one-room school. She sat with her arms crossed, her legs stuck out straight, clad all in black, including black lips, nails, and boots.
School had not started for the day yet, so I spent a little time chatting with Mary and learned that the student’s name was Dolores, that she was here because her grandmother had pleaded with the juvenile judge to let her send Dolores to her church’s little school instead of juvenile hall. The judge had agreed, with some strict stipulations. Tenderhearted Mary had consented to admitting her on a trial basis. Dolores was clearly not thrilled about the arrangement.
I spoke briefly about my concern for Dolores’s influence on the other students, all younger and smaller. I was also concerned for Mary. Her teaching load was heavy, six grades with three first graders and no assistant. She didn’t need a defiant, potentially disruptive student.
A few of the students had already tried to talk to Dolores without success. She just sat staring ahead without acknowledging their presence.
As school started Mary led out in worship. Dolores remained in her arms-crossed, legs-straight-out position through the singing and the story. The usual prayer requests were made. Several children volunteered to pray. Then we knelt for prayer, all but Dolores.
Nothing affirms my belief in our education system as much as listening to children pray during morning worship. There is a special feeling of connection to heaven with their sincere requests for sick family members, for loved ones to find jobs or stop smoking, and even for pets. One has the feeling that God pauses and listens intently to these precious prayers.
This prayer session started out in the usual manner, with the usual requests. Then Stacie, the first to pray, ended with the words “and dear Jesus, thank You for our new student, Dolores. Amen.”
This was followed by Joey, who ended his prayer with “Help Dolores to like us.”
And Susie prayed, “Help Dolores to love Jesus.”
By now, I could not resist peeking at Dolores to see how this praying-in-front-of-your-face-by-name was going over. No change, nothing. Same position, same expressionless stare.
Two more students prayed, each ending with similar requests concerning Dolores. Then Mary prayed, and worship was over. Classes began, assignments were made, and the students got down to work. Mary placed books on Dolores’s desk and said she would get back to her in a few minutes. Dolores shrugged as if to say “whatever.”
As I left, I assured Mary I would fully support her if she should decide that she couldn’t meet Dolores’s needs. After all, we are not set up as reform schools. I urged her to be realistic about the amount of time and effort she should expend on this project. But Mary said she wanted to try; she knew how brokenhearted Dolores’s grandmother would be if she were sent off to juvenile hall. I wasn’t very optimistic as I drove to my next appointment. My phone rang one Friday morning about six weeks later; it was Mary. “Do you have plans for tomorrow?” she asked.
“Why do you ask?” was my wary answer.
“Well,” she said, “I thought you might like to visit our church. Dolores and her mother are going to be baptized!”
Mary’s voice was full of joy as she related how Dolores had made a complete turnaround. She was a good student, a mother hen to the younger children, and had influenced her mother into rejoining the church she had attended growing up. Mary attributed Dolores’s dramatic change to the innocent love of the students who never saw a dark and defiant girl but just another student to befriend and love, and to be prayed for. And, of course, the prayers of Dolores’s grandmother as well as her own helped. “Please come,” she said, and I did.
I witnessed a beautiful teenager and her mother commit their lives to God that Sabbath. I saw a beaming teacher and a grateful grandmother. I spoke with a juvenile judge who also came to witness a happy ending for a change. And I thanked God for the Marys who are willing to go the extra mile to try to save a child. I thanked God for grandmothers who never give up. And I thanked God for children who do not see the negative, but are willing to love and pray, by name, right in their face.
Megaevangelism
I’ve visited schools in many countries of the world and have seen these same scenarios repeated over and over again. Sometimes schools struggle for lack of finances and facilities. Often, especially in some of the poorer or more dangerous countries, they can’t find enough Adventist teachers. But wherever you see them, Adventist schools are making a profound difference in the lives of the students who come and the parents who send them.
Pray for this megaevangelistic event. Pray for the teachers, and for those Doloreses who will spend weeks together this year. Pray for the church and school boards that struggle to find students and funds to keep their schools open. And pray that God will help us find Adventist teachers to fill all of our schools, even the ones in the difficult places of earth.
_____________________________
Homer Trecartin works as planning director for the Office of Adventist Mission. He has spent many years in education as a teacher and administrator. For more information about the mission of the church around the world, visit: www.AdventistMission.org.
Advertisement
Advertisement