When the War Is Over

n Flanders fields the poppies blow
Between the crosses, row on row
That mark our place. . . .
We are the Dead. Short days ago
We lived, felt dawn, saw sunset glow,
Loved and were loved, and now we lie
In Flanders fields.
Take up our quarrel with the foe;
To you from failing hands we throw
The torch; be yours to hold it high.
If ye break faith with us who die
We shall not sleep, though poppies grow
In Flanders fields.”
Immortal lines—from the pen of Canadian army surgeon Major John McCrae. What I find incredible is the throbbing nostalgia they continue to evoke in the hearts of people everywhere—a haunting wistfulness that can easily confuse the sheer horror of war and death with the beautiful flowers blown by the wind that gloomy day in the spring of 1915. 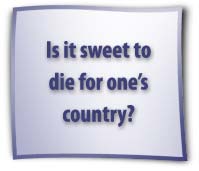 It’s a sensation induced by every war memorial in the world. I’ve felt it on the Plains of Abraham in Quebec, at the Fil-American Memorial Cemetery near Manila, at the Vietnam War Memorial in Washington, D.C., and at the Arc de Triomphe in Paris. And I’ve always been intrigued by the human ability to draw inspiration and hope from our most profound tragedies. It’s what led Laurence Binyon to speak of “music in the midst of desolation and glory that shines upon our tears.” And Walter de la Mare, in solemn admonishment to his native England, bade it weep only for joy at the death of its brave, for each one died believing “within his soul . . . that death for thee was glorified.”
Whence comes this intrigue, this nostalgia, this strange association of glamour with such cruel tragedy? Perhaps it’s a coping mechanism. Like the kidnap victim making peace with their abductor; the captive embracing the enemy.
The enemy here, of course, is death—nothing to be glamorized. In a letter to his mother from the trenches at Ypres, John McCrae used the word “nightmare” to describe the specter of misery he’d been witnessing in the trenches: “For seventeen days and seventeen nights,” he wrote, “none of us have had our clothes off, nor our boots even, except occasionally. In all that time while I was awake, gunfire and rifle fire never ceased for sixty seconds. . . . And behind it all was the constant background of the sights of the dead, the wounded, [and] the maimed. . . .”
Poet Wilfred Owen spoke of dazed soldiers marching while asleep; who, having lost their boots, “limped on, blood-shod,” “lame . . . blind . . . drunk with fatigue.” He said: “If you could hear, at every jolt [of the wagon carrying the wounded and the dead], the blood come gurgling from the froth-corrupted lungs,” you would not so eagerly tell to eager children hungry for tales of glory “the old lie: Dulce et decorum est pro patria mori” [“it is sweet and right to die for one’s country”].
Whatever one may think of Owen’s dark assessment, for the Christian (in the words of another poet), “there’s another country . . . [whose] ways are ways of gentleness, and all her paths are peace.” And that’s a country worth dying for.
During a flight from Zagreb (Croatia) last March, I started taking notice of the magnificent scenery below, as we commenced our long, slow descent into Munich in southern Germany. Neat, white houses, red-roofed, as far as the eyes could see, many standing on single-family plots, but some in multi-family clusters, amid green fields dotted, here and there, with patches of dark-green groves adding variety.
But the setting, however tranquil, belied the region’s painful past—a past, I would hazard, that brought conflict and war to every square centimeter of the ground below me. Indeed, not terribly far to the northwest—in Belgium—lay those sacred grounds of Flanders, whose poppies helped tweak the imagination for the opening lines above. But the message from the ground the day I flew was clear: The war is over!
One day soon, the age-old, cosmic struggle will be done, as well. And before the victors, gathered for that great “memorial day” event upon the sea of glass, will stretch in all its breathless beauty God’s eternal peace, purchased by His death.

Cliff's Edge
The Dying Orphan’s Fear
The dying orphan’s fear reflects something embedded deep in our souls about wanting to be remembered.
Commentary
A Treasured Chain
A story about the power of forgiveness