WAS BORN IN NORTHERN CALIFORNIA to a wealthy family. My father was the son of a Methodist minister, and my mother came from a godly Presbyterian family. But when they married they left God completely out of their lives. My four brothers and I were raised without knowing God. We did not pray or go to Sunday school, church, or any religious service. I didn’t see a Bible until I was 19 years old.
As a young man I joined the military and took courses in engineering at Boeing Aircraft in Arizona. At the nearby Army Air Corps base I met a young Baptist who urged me to read the story of Charles Fuller, speaker of the radio program Old Fashioned Revival Hour. The book gave me my first inkling about Christianity, but it had no lasting impact.
Then my new friend invited me to prayer meeting. After he left I put on my uniform and started across the parade ground to the post chapel. As I walked I distinctly heard a Voice say: “I want you to be a minister.” The sensation stunned and shocked me. When I got to the chapel I saw my friend and four other guys sitting on the front row discussing the book of Matthew. I listened about 10 minutes then jumped up and ran back to the barracks.
Trial by Fire
During World War II I was a flight engineer, flying B-17 bombers from England to Germany. On June 21, 1944, our plane was damaged during a bombing run over Berlin, taking eight direct hits. With two direct hits in the nose and one in the fuselage, three engines failed. Flak came at us in 200-foot increments. Our tail gunner reported its progress: “Six hundred feet, 400, 200,” then it hit us. 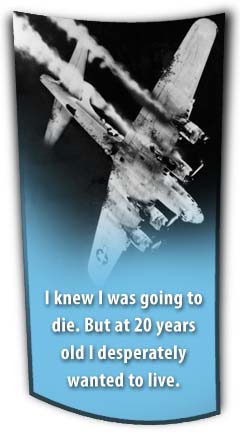 One shell went through our left wing and exploded above us, leaving a hole about eight inches in diameter that released about 500 gallons of 100 octane fuel into the wing. By every law of physics it should have exploded, but it didn’t.
We kept the plane in the air another 90 minutes on one engine. The previous day Nazi Air Chief Hermann Goering, in a move to save munitions, had ordered fighter planes not to attack seriously damaged bombers, believing they would eventually be destroyed by crashing. Consequently, even though any number of enemy planes could have destroyed us, they all turned away.
The pilot flying our P-38 escort radioed: “I don’t know how you fellows are staying in the air. You look like a kitchen sieve to me.”
About two hours from Berlin we flew into more flak, lost control of the plane, went into a power dive, and bailed out. I went into a very tight spin and headed for the ground head-first at a 45-degree angle. When my parachute opened, my shoulders took the blow, fracturing some vertebra in my neck.
Farmers in the countryside began shooting at our crew and me as we floated toward the ground. I drifted into a walnut tree that cushioned my fall. When I got on the ground, three civilians surrounded me and began beating me with clubs. They had received tremendous devastation and suffered much from our bombers, and they vented their anger on me as one of those responsible for it.
We were the first GIs they had captured. After the local burgomaster was summoned, my buddy, Pratt, and I were forced to stand about 25 feet from 10 men selected to be a firing squad.
The burgomaster gave the command: “Ready, aim . . .”
I was petrified. I knew I was going to die, but at only 20 years old I desperately wanted to live. I didn’t know what happened to the dead and could only think of boiling cauldrons in a place called “hell” meant to torture the unsaved.
Then the last command: “Fire!”
There were 10 clicks, but not a single gun fired. The burgomaster ordered the farmers to reload. They pulled the chambers back, and 10 bullets fell on the ground.
Again the burgomaster called, “Ready, aim, fire!”
Another 10 clicks, but no report.
After this happened once more, six soldiers appeared and ordered the firing squad to drop their guns.
Life as a Prisoner
A fellow crew member and I were transported to a stalag in Frankfurt. Half of my 7’x5’ cell was filled by my bunk. The walls were painted gray. It had no windows, no ventilation, no toilet. A single, bare lightbulb hanging from the ceiling burned 24 hours a day. We could leave the cell only once every 12 hours.
For breakfast we received about two ounces of peppermint tea and a little wafer of bread. For lunch we got another taste of tea, bread, and about four ounces of sour barley.
In the mornings we were awakened at 4:00 and taken to the interrogation center, a cemetery in a forest a few miles away. One time we were given a shovel and told to dig a pit 2’ wide by 6’ deep. We tried to dig as slowly as possible, but by noon we were waist-deep in the hole, and by evening up to our shoulders.
When we were pulled out of the hole we were ordered to stand with our heels at the end of the hole, facing the firing squad.
The interrogating officer said: “Tell me what I want to know or that is your grave.”
From somewhere I gained an unknown strength that allowed me a certain measure of peace. We were eventually taken back to camp. I spent the rest of the war in a stalag in West Poland.
When the Russian army came within 11 miles of our prison, we were evacuated. Ten thousand of us were moved in columns of 1,800 every other day. I could stand, but I walked with great difficulty since my injuries after bailing out of the plane had never healed properly.
We walked 550 miles in 91 days. We called it the Great Black Death March. We marched in snow, ice, and sleet. As I stumbled along—cold and hungry—I cried out: “God, if You exist, if You’ll save me, I’ll seek You and serve You.” For three days I rode in the “death wagon,” too sick to stand. Of the 1,850 men in my section, only 250 of us lived to be liberated.
My Vow Remembered
On returning to the United States I remembered my vow to God and began searching for Him. I drove from San Francisco to Los Angeles looking for some evidence of a personal God who cared about me. A friend later told me God wasn’t to be found on the road, but in churches. I had never been to church, neither was I interested in going. In the Army a chaplain told us that sinners go to hell to suffer eternal torment, while saints rode on clouds in heaven. Both concepts disgusted me.
But I began visiting churches. After going to several, I convinced myself there was no God, and I reasoned I had fulfilled my obligation made to Him when He preserved my life during the death march.
At the time I was working at the U.S. Navy shipyard in Vallejo, California. My firewatch, a small man, was filled with hatred for the world and everything in it. One day, while working with our welding equipment, he nudged me and said, “Let’s have some fun. See that fellow coming toward us.” I looked and saw one of the tallest men I had ever seen. “Hey, brother,” my companion said to him, “you’d better get ready to meet your Lord.”
T

he huge man walked up to us and in a voice like a foghorn bellowed, “I’m ready. You’re the ones who’d better get ready.”

The little fellow behind me whispered: “Don’t listen to him, don’t read anything he gives you, or you’ll be as crazy as he is. He’s a Seventh-day Adventist.”
“What’s that,” I asked, “a lodge, or a union?”
He answered, “He goes to church on Saturday.”
As I looked up into his huge face, I saw peace and felt a power that seemed to radiate from him. “You go to church on Saturday?” I asked.
“Yes,” he replied. “What day do you go to church?”
“I don’t,” I replied, explaining that I knew nothing about religion.
He took a Bible from his pocket, opened it, and said, “This is what God says.” Never once did he tell me what he thought, or what his church taught. It was always, “This is what God says.”
In three minutes I knew that Saturday is the Sabbath, and I accepted it instantly.
That was the beginning of a new life for me, a changed life that brought me greater miracles than those I experienced during my service during the war in the Army Air Corps. I became a Christian when I was 22 years old, but God had been pursuing me—and protecting me—all those years; I just didn’t know Him.
______________________________
After a career as pastor, missionary, and departmental director, James H. Harris passed to his rest in March of this year. Minnis M. Coe was a freelance writer when Harris told her his story.
Advertisement
Advertisement