Krista Tippett is host of the award-winning radio program, Speaking of Faith. Billed as “Public Radio’s conversation about religion, meaning, ethics, and ideas,” it is heard on the American Public Media network on dozens of stations across North America. Tippett was recently in Washington, D.C., to promote the release of her book, Speaking of Faith. Adventist Review managing editor Stephen Chavez attended the public event and later had an opportunity to ask Tippett questions about her conversations with people of different faith traditions. We begin this piece with some of her public comments about the importance of dialogue between people of faith.—Editors.

CREATING SPEAKING OF FAITH AS A WEEKLY national show for the past three years has been a great adventure; especially as in that period religion moved from the sidelines to the center of news and world affairs. We started piloting this program at Minnesota Public Radio in 2000. On September 11, 2001, I was here in Washington, D.C., at the Dulles Hilton getting ready for our first big meeting to raise money so we could become a weekly show. There was still a huge amount of skepticism in the public radio system about whether it was appropriate to have a program about religion on public radio, and whether it was worth an hour a week.
Obviously, that meeting was canceled as we all watched airplanes crashing into buildings and the Pentagon in flames. I drove home knowing I had this one little hour of radio, which meant maybe I could address some of the spiritual confusions and questions those events started to raise. And all these years I’ve been doing this show people have asked me, How did you come to care about these kinds of questions? Can you tell me about your spiritual journey? How are you changed by these conversations with people across the world’s traditions week after week? I’ve never been able to answer that question in five minutes, so I’ve written a book, in part, to give those important questions the texture they deserve.

Tell me about your religious background.
I was raised Southern Baptist in Oklahoma. I had a Southern Baptist preacher who was probably the most informative religious person in my childhood.
I went away to college on the East Coast. I was not a religious person at all for about 10 years. I ended up in Germany. I was interested in politics and was drawn to the divide between Capitalism and Communism in the eighties. I ended up in divided Berlin as a journalist, was working on foreign policy, and became a diplomat during my last couple years in Berlin.
Then I started asking spiritual questions, although I wouldn’t have called it that at the time. I ended up, a couple years later, getting a theological education, because if I was going to be a religious person again I wanted to know I could bring that together in my mind with everything I knew of the world.
When I came out of that I felt there was just a black hole on public radio where a discussion of religion should be. That was the germ of the idea to start this program.
Have you found your faith strengthened by your conversations with a variety of people from different faith perspectives?
I find my faith is deeper and more generous and open-hearted. I have been asked whether this program doesn’t encourage relativism, and I’m absolutely convinced that it does not. I don’t think faith works that way. Most of us tend to be planted somewhere; even seekers are planted somewhere, searching somewhere at the moment. Most people tend to learn something about their own tradition at the same time they’re learning something about the other.
A Benedictine monk at St. John’s Abbey talks about people of other faiths as “intimate outsiders.” It’s that way for me. The conversations I have are illuminating, they’re educational, and they also teach me things. Hearing someone put different words around a virtue that may also be at the heart of my understanding of Christian tradition takes me deeper into that virtue myself.
When you started this program, did you imagine you’d be talking to Muslims, Christians, Hindus, Buddhists, or was it just Christian conversations you had in mind?
I was really clear that I had to explore the breadth of the world’s religions.
Because of the way the world has changed in these years since I first had the idea, and since this show has grown, I’ve interviewed many Muslims. In the earliest years we had a focus on the monotheistic traditions—Christianity, Judaism, Islam—and that’s because Islam, in particular, and that whole relationship with “the people of the Book,” became front and center of world events.
So many times religious people tend to talk past each other, rather than to each other.
An evangelical professor at a seminary said to me, “I think what you’re doing is ‘stealth dialogue.’ Some of us wouldn’t necessarily engage in those dialogues ourselves, but we get to hear your program. Suddenly I hear someone speaking and I say, ‘Oh, that’s what they mean by that!’” He said, “Although we haven’t had that conversation ourselves, I move forward with a new appreciation and openness to understanding.”
How do you get past labels and interact with people on a personal basis?
To me that’s just one of the most critical tasks. Our culture is full of sound bites and categories. Religious people, different kinds of religious people, are still labeled in a way we stopped thinking is acceptable with different ethnicities and races and cultural differences. But it’s still somehow acceptable to put religious people into boxes.
I only ask those I speak with to speak for themselves, not to represent a whole tradition, but to talk about how their faith, their religious convictions, their practices, their denomination, informs their lives, whatever they do. They speak in the first person. 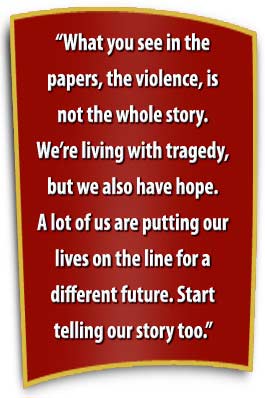