y friend Emily’s brow furrowed slightly as she glanced my way. Having studied the Bible with her for several months, I intuited her confusion. She can’t comprehend what the pastor is saying, I thought. He’s using too many “code” words, and the concepts are too abstract for her. The subject matter of the sermon we were listening to was the final atonement as it related to the marriage supper of the Lamb—not the stuff of sermon fluff. I truly appreciated the speaker’s willingness to tackle the big topics, and his message was backed by solid conviction, but for all his virtue, his words were not getting through.

Em was a classic “postmodern” with all the trappings: She cast off the notion of objective truth and peered at religion through an eye deeply jaundiced, yet ironically she longed for purpose, meaning, and community. The result was a contradictory mix of openness and skepticism, classic to today’s “seeker” profile. Coaxing Emily into the church service had been no easy task, and it was with an admitted sense of mother-hen pride that I finally sat next to her in a pew.
What’s So Ironic?
The story of our meeting is a bit anomalous. She had come to me, all wide-eyed and frantic, wanting to understand the book of Daniel. “I saw the movie The Matrix,” she offered, “and I think there’s some kind of mystical connection between that movie and Daniel the prophet!” I stifled my impulse to naysay, and the two of us began several weeks of studies, with Emily receiving the early lessons like a baby bird with gaping beak. She loved the tales of vegetarian teenagers, forgotten dreams with cosmic implications, and hungry lions hushed to kittens by the angels of God.1 I moved her cautiously into the prophecies of Daniel 7, 8, and 9. The birdie’s beak was still wide open enough to receive the parallel prophecies of the four beasts,2 the ram and the goat, and the little horn,3 and to make the acquaintance of Belshazzar, Gabriel, and Constantine. Truth built upon truth until we found ourselves hammering out the 2300-day prophecy math on a piece of scrap paper.4 Emily and I even dialoged on the Great Disappointment and the beginnings of the Seventh-day Adventist denomination in 1844.5 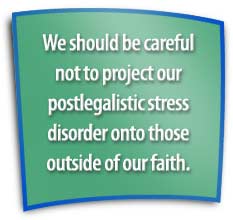 I reconvened with the board and presented my plan. As soon as I began talking about doctrine, some of the board members began to squirm. “People don’t want to hear doctrine!” one individual said. “They want to hear about the wonderful love of God.”
I knew what this individual meant, for doctrine can be preached so tediously that even the angels must sleep. But my conversations with Emily and others had revealed something quite opposite of what some Adventists believe—that doctrines are what give our faith its allure. In fact, the distinctive truths of our church are the pressure-cut jewels that catch the light of Jesus and dazzle the true seeker with His beauty. It may be that years of Christ-less, dry-bones religion has left some of us in a state of doctrinal burnout, but we should be careful not to project our postlegalistic stress disorder onto those outside of our faith.
A religion without well-defined, responsibly substantiated, pragmatically applied doctrines is about as wonderful as Wonder Bread. It may go down easy, but it doesn’t nourish. True—grocery store shelves may hold more white bread than stoneground, organic, seven-grain with sunflower seeds, but those devoted to eating whole grains will pay triple the price. There are seekers out there—men and women looking wistfully to heaven—and they will sell all they have to buy the faith of Jesus. Will we deliver on the promise? Will we share these precious truths shamelessly?
Of all the doctrines in our treasure chest, one stands out as the unique contribution we make to Christian theology. Other churches teach the biblical Sabbath,17 the health message,18 and conditional immortality.19 We alone teach the sanctuary truth. Will we cherish the treasure that makes us unique, or trash it as a useless relic? The Emilys of the world await our reply.
_____________________
1 Daniel 1, 2, and 6.
2 Daniel 7.
3 Daniel 8.
4 Daniel 8:14.
5 This date is calculated by subtracting the beginning date of the prophecy, spoken of in Daniel 9:25 and believed by most scholars to be 457 B.C., from the 2300-day figure found in Daniel 8:14. Using the day-year principle of prophetic interpretation, and compensating for the zero year when passing from B.C. to A.D., this arrives at the year 1844, the year of the Great Disappointment. William Miller had preached the second coming of Jesus in that year, and believers were disappointed when Christ did not return. Yet the faithful were driven back to their Bibles, ultimately to discover that Miller was right about the date, but wrong about the event. This ultimately led them to believe that in 1844 Jesus began His ministration in the Most Holy Place of the heavenly sanctuary.
6 The Great Controversy, p. 425, uses the term “investigative judgment.” The chapters “What Is the Sanctuary?” and “In the Holy of Holies” are an excellent synopsis of the historical and biblical foundations for the sanctuary doctrine.
7 Revelation 19:9.
8 The writings of Ellen White present two alternative views on the identity of the bride of Christ. The Great Controversy, pp. 426 and 427, says the bride is the New Jerusalem, the Holy City. In other places, she says that the bride is the church (Letter 39, 1902; Letter 117, 1901; Letter 1231⁄2, 1898). It seems to this author that when explaining the concept of the sanctuary it is most helpful to use the latter view. We must remember that in inspired writings metaphors are used flexibly. For instance, Jesus used the metaphor of yeast in one place to symbolize sin and in another to symbolize the kingdom of God.
9 Ronald Sider has written a book called The Scandal of the Evangelical Conscience: Why Are Christians Living Just Like the Rest of the World? (Grand Rapids: Baker Book House, 2005).
10 On November 3, 2006, Ted Haggard resigned his leadership position in the National Association of Evangelicals and stepped aside as pastor of the New Life church in Colorado Springs over allegations of a sexual relationship with a male masseur and the use of methamphetamine. Politically, he opposed gay marriage: http://en.wikipedia.org/wiki/Ted_Haggard.
11 See The Great Controversy, p. 425.
12 Most nations are concerned about the migration of peoples from rural areas to large urban agglomerations. This trend began with industrialization and continues today. World Population Policies, United Nations publication sales no. E.04. XIII.
13 See 1 John 3:4.
14 Almost half of all baby boomers—46 percent—have been divorced: www.barna.org/FlexPage.aspxPage=BarnaUpdateNarrow&BarnaUpdateID=170.
15 See Leviticus 16:29-34.
16 See The Great Controversy, the chapters “What Is the Sanctuary?” and “In the Holy of Holies.”
17 The Seventh Day Baptist Church.
18 The Mormon Church teaches abstinence from caffeine, tobacco, and alcohol.
19 The Primitive Advent Christian Church and others.
________________________________
Jennifer Jill Schwirzer, wife, mother, author, songwriter, and musician, writes from Wyndmoor, Pennsylvania.
Advertisement
Advertisement