y best friend, Tim, doesn’t believe there is a God. It was not always that way. He was raised much like I was in a Seventh-day Adventist home, and educated in Adventist schools. God was an important part of his life back then, he says, but something happened.

The realization that the existence of God was unprovable in a “scientific” way began to bother him. Faith seemed less important and less tenable. The tangible, measurable, observable methods of science were held to be more reasonable. So faith in God was replaced by faith in science.

Sure, Tim allows that science has gaps of knowledge. But he finds this more acceptable than believing in the “literary and poetic ramblings” of some “ancient, superstitious, and gullible desert wanderers and farmers.” Science will, he is certain, provide answers, given enough time and technology. Supernatural phenomena (God, creation, miracles, etc.) will, he believes, be explained in due time by science, if in fact they exist. Through our discussions over the years, I must admit an annoyance at his claims that no thinking person today believes the Christian tenets. To Tim, Christian beliefs are for those who can’t cope with life’s meaning and death’s finality and inevitability. The thinly disguised and subtly condescending attitude toward me must be that I do not think; that my beliefs are a result of childish, illogical reasoning, driven by fear and helplessness. It is uncomfortable to be accused of living with part of your mind—the reasoning part—turned off.

But in fairness to Tim, many Christian responses seem to him condescending and exclusive too. “Spiritual things are spiritually discerned” (1 Cor. 2:14) means he is eliminated from having this source of supernatural knowledge. He also might feel accused of living with part of his mind tuned out—the part that recognizes reality beyond the confines of science.

As I have wondered about this wide gap in how we view life, a question lingers. If a sovereign, all-powerful God exists, as I believe, on whose terms may I know Him—God’s or mine? Tim has unambiguously answered that for anything to be real to him, science must explain and confirm it. Since God has not chosen to reveal Himself with certainty through science, He must not exist. For Tim, the terms of coming to a knowledge of God are his own: science and naturalism. In his mind, these do not speak to the issue of God; therefore God is unknowable. The problem for Tim is that if there is a reality beyond science, he is not equipped or prepared to know it.

As a Christian, I believe it is God Himself who sets the terms for knowing Him. Being the sovereign, all-knowing ruler of the universe, God has a right to do this. The terms for coming to know God are clear and pointed. “Jesus saith unto him, I am the way, the truth, and the life: no man cometh unto the Father, but by me” (John 14:6). Further, “there is none other name under heaven given among men, whereby we must be saved” (Acts 4:12). Rather than think it unfair of God to allow only one way to Himself, the Christian is overjoyed that there is a way. The gospel. The good news. Salvation through Jesus Christ alone.

Sin, then, may be thought of as insisting on setting our own terms for knowing and serving God. This is a constant theme throughout the Bible:

• Abraham tried to fulfill the promise on his own terms with Hagar.

• Jacob gained the birthright on his own terms—by his deception.

• The children of Israel repeatedly failed to accept and enjoy the covenant terms of God who simply said: “I will be your God and you will be My people.”

Many other examples in Scripture confirm the utter futility of trying to reach God on our own terms.

Jesus is the great example of how to live a sinless life because every moment He lived it on God’s terms, not His own. The issues at stake when Christ was tempted in the wilderness can be thought of as a choice between living on His own terms or on God’s. A Christian knows that God can be known and interacted with in a real and personal way. But there is no place for our own demands and terms. 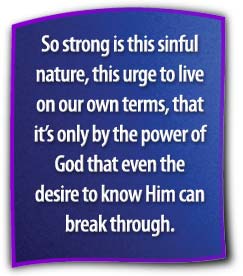 Christians understand the absolute necessity of humility and honesty in the search for God. We must be humble enough to surrender our own agendas and terms, and honest enough to admit our own self-centeredness and capacity for self-deception.

Humility and honesty are crucial prerequisites to understanding that our human nature does not want to live on God’s terms. This humility and honesty—as well as surrender—must be renewed daily as we “take up our cross and follow [Christ]” (Luke 9:23). It is self, and its insistence on living by its own terms, that must be crucified daily (see Gal. 2:20).

So strong is this sinful nature, this urge to live on our own terms, that it’s only by the power of God that even the desire to know Him can break through (see Matt. 16:17; John 6:44). The knowledge that truth can be known only through God keeps the Christian humble and open to further truth. For it is not we who create or discover truth, but rather God who reveals it to us (John 16:13). Awareness of this fact will eliminate any tendency toward pride in our own spiritual knowledge. Further, it opens our eyes to the great number of ways in which we try to reach God on our own terms.

As science and technology make more and more advances, the idea that God can be known only through Christ will no

doubt be assailed as more and more foolish. The terms of knowing God will seem more and more irrelevant and outdated. But the cross of Christ has been regarded as foolishness and as a stumbling block since the beginning of Christianity (1 Cor. 1:23). If creation can be explained away by science, next to go will be the incarnation of God, then the resurrection. Without these, Christianity no longer exists (1 Cor. 15:14).

(Isn’t it ironic, though, that the very science the unbeliever uses to discount God, the believer sees as simply more evidence for and description of the magnificent structure and order and creative mastery of a loving God!)

Finally, the Need for Trust

But rather than despair at the seemingly impossible task of convincing the unbeliever of the reasonableness of God’s terms, the Christian trusts Jesus’ promise that “with man this is impossible; but with God all things are possible” (Matt. 19:26). This promise was made in the context of the disciples’ astonishment at Christ’s terms of salvation. Thus the salvation of my friend Tim is in God’s hands, not mine. That’s good news!

The responsibility of Christians when they accept God’s terms of salvation is to live lives so motivated by the love of Christ that it becomes an irrefutable and entirely reasonable argument for faith in God (Matt. 5:16). By the power of the indwelling Christ, patience, kindness, honesty, joy, peace, gentleness, self-control, and faithfulness will be evident. Unity, harmony with other believers, and unselfishness will mark the Christ-filled life. All the great questions—about origin, about meaning, and about morality and destiny—can be addressed by the humble life of the Christian who chooses to live according to God’s will. This is the best argument for the reasonableness of God’s terms.