Can You Hear Us Now?

HAVE BEEN TOLD THAT I GREW UP IN A unique home. My parents are both Deaf, and communicated through American Sign Language (ASL). I feel blessed to have such loving parents. They cooed to me as an infant in their hand language. I picked up ASL quickly, and this became my first language. My mother and father proudly share how I “said” my first word. At 8 months old, I waved goodbye and signed “work” to my dad as he headed out the door.

We were within walking distance from many relatives. I quickly sensed the communication barriers and how my parents were mostly left out. At family functions they sat to themselves, visiting with each other since their attempts to make conversation with other family members were to no avail. They were just too different and too difficult to talk with. While growing up I tried to learn about my family history. When I asked my parents, they replied, “I don’t know. No one has told me. When I ask, they think I’m forgetful. I don’t ask anymore.” I had to ask around, and then relay the information to my parents.

Deaf friends were my parents’ true family. They communicated fluidly, having much in common. They shared similar experiences, difficulties, and triumphs. They were also very accepting of one another, understanding what it feels like to be left out in the cold.

My parents attended residential schools for the Deaf. Students went home only during major holidays and summer vacations. Often students felt like their own families were strangers, and found communicating with parents, siblings, and other relatives very challenging. Deafness felt like a disability when they were around them, and they were handicapped, left out, or stupid. Back in school, being Deaf was very normal and celebrated. Everyone was able to sign openly with one another, and students thrived. Because of this bonding, the school with all of its students and faculty became another family. These relationships last for a lifetime.

Deaf people are a beautiful people, rich in history and culture. They know how to have a fantastic time, how to work, and how to be creative. They live and interact as a distinct people group with their own customs, norms, habits, thought patterns, language, and common experiences. Since they are a culture group, the letter d in “deaf” is capitalized.

“Hearing impaired” implies they are missing something, aren’t normal, not complete, and disabled. “Deaf” has a different meaning. It’s a word that describes a quality that unites Deaf individuals into a cohesive, vibrant community. Deaf people tend to believe that deafness is not a disability or a handicap. They prefer to be called “Deaf.”

I grew up surrounded by my parents’ Deaf family and their rich culture. This meant Lalafay became a part of my life too. 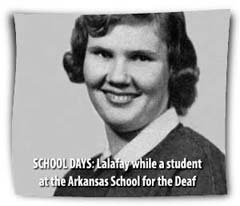 I first met Lalafay when I was 10. My mother and she were schoolmates at the for the Deaf. Although complete opposites with very different lifestyles, they remained good friends. After all, they were “sisters.”

Lalafay was a rough woman with an intimidating, fiery temper that erupted at any given moment. She always squeezed a cigarette between her fingers while she signed, while a scowl typically graced her face. An atheist since she was a little girl, Lalafay called anyone who believed in God “absolutely crazy!” in exaggerated sign. I was afraid of her.

Over the next few months Lalafay frequently visited us. In fact, she spent nights with us, bringing her grandchildren for me to play with. My mom didn’t know what to do with this chain-smoking, beer-drinking, swearing atheist who easily became agitated or upset. Mom had concerns about the negative influences Lalafay might have on me.

Mom decided to share Jesus with her, to endure the blasts of profanity and insults. Either Lalafay would come to know Jesus or she would flee. Mom enlisted my help in prayer and witness.

Lalafay didn’t flee. She still said unkind things about God, but she always came back. We started with attention-getting literature on the table. We looked for materials that were easy to read. Not being able to hear the spoken language makes learning to speak and write English fluently difficult. English is like a second language to many Deaf people, including Lalafay.

We told her about new things we learned by reading these books or magazines, and pointed out some interesting trivia. Lalafay took interest. In fact, she began to pick up some of the literature off the coffee table, asking if she could borrow them. Our loans would be over a period of months, but she always returned them.

We hosted “Deaf Camp Meeting,” an outdoor meeting held in our front yard. The kids slept in tents while adults bunked in our home. There were games, skits, and always a church service and vespers given by Deaf Adventists. These meetings were absolutely homespun and without frills. Mom had hoped to introduce some of her Deaf friends to Jesus. Lalafay enjoyed the weekends immensely.

When Lalafay found out that we weren’t planning future camp meetings, she became very upset. “Why not?” she demanded. Mom explained that a lot of work goes into these little get-togethers. Lalafay, with exaggerated signs, exclaimed, “I’ll help!” 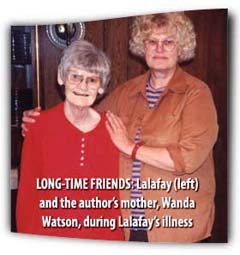 Mom and I looked at each other. If Lalafay was willing to help, we would have another meeting. Lalafay mowed the lawns, cleaned up the camping areas, and memorized her lines for skits, and more. She made the meeting a success.

Lalafay and her husband, Jim, moved out of the city to the country to be near us. We were stunned. Deaf people tend to move to the cities where Deaf culture flourishes, with all kinds of fun events, parties, and fellowship. Lalafay was even the president of the Deaf Senior Citizens, and never missed one event in the city. Moving to the country would cut off fellowship with many people with whom she could fluidly communicate. Not another Deaf soul lived within 30 miles or so, as far as we knew.

We did enjoy having a Deaf friend living only a couple miles away. We visited each other several times a week. Lalafay came over to learn how to raise a vegetable garden. We helped her and her husband build the addition to their home. We carpooled to Deaf events, such as Deaf Senior Citizens luncheons, school reunions, and Deaf club meetings.

I don’t think Lalafay noticed, but she was changing. She no longer mocked our love for Jesus; profanities were no longer a part of her vocabulary; and she wanted to quit smoking. Without intimidation, I affectionately teased her, “If you are my mother’s ‘sister,’ then you must be my aunt!”

Soon after I went away to boarding academy, Lalafay suffered a massive stroke. Mom dashed to her side, and found Lalafay terrified that she was going to die. “Don’t let me die! I don’t want to die!” she repeated over and over with one arm. She grabbed my mother, and was in absolute fear. My mother prayed with her, and gave her all the support she could. Lalafay relied on that friendship to get her through.

A mutual Deaf friend, Mae, came to visit Lalafay in the hospital. Mae claimed, “She is a different person than before she moved up your way. Did you know she would bring me books and magazines that you loaned her? She refused to take them back until I read them.” That explained the long loans. Lalafay was witnessing, too.

Over the next eight years, her health became frail. She had ministrokes, lung cancer, heart disease, and the list goes on. She couldn’t even eat solid food because the muscles in her throat were almost paralyzed. She was signing with one hand, and moved in baby steps around the home before being confined to a wheelchair.

While her body grew feeble, her spiritual life was healing and growing. Her Bible and study guides lay on her dining table where she sat all day, every day. In spite of the difficulty in getting around, she visited our church frequently.

The highlights for her were the special Sabbaths at our church when Pastor Trexler was the speaker. On such Sabbaths, as many as 40 Deaf people visited our little country church. They wanted to see Pastor Trexler, a Deaf pastor, preach in their own language. Pastor Trexler was often given the privilege to speak to the entire congregation during the worship service. As he signed animatedly on the platform,

I voice-interpreted for those who could hear. The hearing members were so blessed by his sermons; visitors who normally wouldn’t step foot in church came just to “see” him preach. Lalafay was especially blessed.

Lalafay came to love Jesus with all her heart, soul, and mind. She became a bundle of joy and smiles. The fussiness and outbursts were a thing of the past. In fact, she became so tender that she cried easily. The nurses, doctors, and aides loved her, telling me, “Lalafay is such a sweetie! And she is always so happy!” She truly had changed. 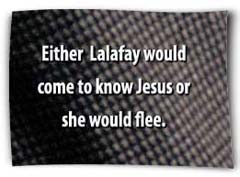 During our visits, Lalafay lifted her one usable arm to ask questions about the teachings of Christ. She especially enjoyed descriptions of the Second Coming, and how the dead in Christ would rise to meet the Lord. This study was often requested. After the story was told, Lalafay would sign, “I’m not afraid to die. I know what will happen.”

When Pastor Johnson moved into our church district, I gave him Lalafay’s address. Immediately Pastor Johnson was at her home studying with her, via pen and paper. Over a few weeks, He discovered that this woman believed everything that Adventists hold dear. He wrote a question for her to read: “You are Adventist already! Would you like to become a member of the by profession of faith?”

She beamed and scribbled, “Yes!”

The next day Mom went for her usual visit. Lalafay didn’t quite seem herself, though she had her usual cheerful smile. She again lifted that one arm and signed to Mom, “Can you tell me again? What happens when you die?”

Mom, familiar with the routine request that came at each visit now, once more told her the story. “Death is like falling into a restful, deep sleep today and waking up tomorrow. The very next thing you will hear will be the first sound you will have ever heard: the Lord Jesus saying, ‘Awake! Ye that sleep in the dust! Arise!’”

Mom continued the story, using visual signs that practically paint the Second Coming scene in the air. “Not only will you be alive, but you will be able to hear, sing, jump, run, and play like a young child. So don’t worry if you die, because I’ll see you tomorrow.” Mom noticed Lalafay smiling in an odd sort of way.

Before Mom dashed off to the store, she told Lalafay that I would be visiting her the next day, which was Sabbath. Mom thought for a moment as she got up and said, “And I’ll see you tomorrow, too.” They hugged and Mom was out the door.

Mom had just settled into the living room after putting away the groceries when a flashing signal light indicated she was getting a phone call. She placed the phone receiver onto her TTY machine, turned it on, and typed, “Hello, GA.”

The caller typed in a reply, “This is Jim. Lalafay just passed away. She died 45 minutes after you left.”

Mom sat at the desk, stunned. Then she remembered the last thing she had signed to Lalafay.

“I’ll see you tomorrow.” Tears streaming down her face, Mom nodded her head. She sure would.