he documentary “The Lost Tomb of Jesus,” just released on the Discovery Channel by filmmaker and Oscar-winning Titanic director James Cameron, is a report on the exploration of what is claimed to be “perhaps the greatest archaeological find in history”: the recently discovered family crypt for the Virgin Mary, Jesus, Mary Magdalene, and their son Judah.
Dan Brown, the author of the bestseller The Da Vinci Code, must surely be smiling to himself.
In their best promotional manner, even the filmmakers of this documentary are taking a somewhat open-ended tone. At a press conference where Cameron displayed a limestone coffin that he claimed had contained the mortal remains of Jesus, he said, “We’ve done our homework. We’ve made the case, and now it’s time for the debate to begin.” Apparently to aid in the debate, HarperSanFrancisco has published a companion book, The Jesus Family Tomb.
Writer/director Simcha Jacobovici pointed out that some of the writing on the bone boxes, or ossuaries, hasn’t yet been translated and added, archly, “If it doesn’t say ‘Jesus’ and says ‘George,’ this case falls apart.” 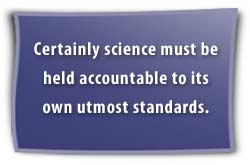 Response to this new challenge to the accuracy of the scriptural account of Jesus’ resurrection and ascension is not providing any surprises.
Some are attacking the credibility of the filmmakers as amateur archaeologists and biblical scholars and accusing them of “pimping off the Bible.”1 (Jacobovici produced an earlier Discovery program in 2002 that reported the finding of the ossuary of James, the brother of Jesus.) Others are pointing out how utterly ordinary are the names thus far listed on the boxes. (An estimated 25 percent of women in the Jerusalem of Jesus’ time were named Mary or a variable.) And yet others—particularly Christians—are resurrecting the familiar charge that Hollywood is once again aiming a sinister knockout punch at religion.
But what if this turns out to be the knockout punch? What if the translation does come out “Jesus”—and it is proven incontrovertibly with every instrument available to modern science? What then?
It could happen.
In today’s parlance those who have elected themselves as the defenders of science recognize only natural evidence. They have adopted the assumption that physical matter is the only reality. Even if the experts were allowing scriptural accounts into the evidence in this case, they’d only be placing it alongside all the other extra-scriptural evidence that they may have collected. They are utilizing the process that viewers of the popular CSI shows see on TV in each weekly program. When the experts are subjecting what they find to world-renowned researchers in Aramaic script, ancient DNA analysis, forensics, archaeology, and statistics, they’re analyzing it through a lens in which anything supernatural has been sifted out, leaving cold, hard, data pertaining to the physical world and nothing more.
But how objective is it to decide even before all the evidence has been collected that only some evidence will be allowed?
Certainly science must be held accountable to its own utmost standards. One blog respondent said she would like to see the documentary submitted to a scientific peer review.2  If this were done, it could well be that it’s proven to be the tomb of George after all. But it would be doing so only from a materialist standpoint.
Even Newsweek, referring to the Bible as “still the best existing historical record of the life of Jesus of Nazareth,” points out that “all four Gospels say that Jesus was crucified on the eve of the Sabbath; all four say that the tomb was empty when the disciples woke on Sunday morning.”3
For Christians, of course, Scripture is the clear and final answer. But for scientists in today’s world, the quest is to strip Scripture of its spiritual underpinnings. Even if a publication like Newsweek still recognizes the Bible as a valid historical record of Jesus’ life, our culture continues to search for evidence to supersede it and to deny the divinity of Christ.
“God is the author of science,” Ellen White reminds us. “Scientific research opens to the mind vast fields of thought and information, enabling us to see God in His created works.”4 But science has chosen to deny the existence of its own author. And most of those in our culture are as oblivious of God’s existence as Huckleberry Finn would have been of Mark Twain.
When science gave up its faith in the divinity of God, it placed its faith instead in the divinity of its own human perception and human reason. This is little more than a dreadful paraphrase of the utterly arrogant assertion: “ ‘I will be like the most high’ ” (Isa. 14:14, KJV).
________________________________________
1“Raiders of the Lost Tomb,” Newsweek, March 5, 2007, p. 61.
2 <Http://www.infuzemag.com/news/archives/2007/02/bogus_bone_box.html>, accessed March 2, 2007.
3 “Raiders of the Lost Tomb,” ibid., p. 62.
4 Mind, Character, and Personality, vol. 2, p. 739.