This is My Body

S HE BROKE BREAD WITH HIS disciples that historic Passover evening 2,000 years ago, Jesus used four words (as we have them in English): “This is my body” (Matt. 26:26; Mark 14:22; Luke 22:19). And we find them at the heart of the Reformation controversies concerning the doctrine of the Lord’s Supper.
How do we Adventists understand those words? In what follows, I’d like to show that our position on this question grew largely out of that taken by Ulrich Zwingli, the leader of the Swiss Reformation in the sixteenth century. But before examining Zwingli’s position in the light of Scripture, let’s do a brief overview of the two other major historic interpretations of the Supper for background and contrast: the Catholic position and the Lutheran.
The Catholic Interpretation
The Roman Catholic interpretation of Jesus’ words is known as transubstantiation. Transubstantiation refers to the transformation of the elements, holding that the bread and wine of the Lord’s Supper “are changed as to substance into the actual body and blood of Christ.”1 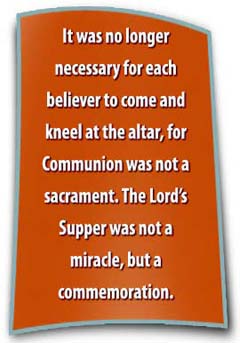 This belief received full approval and proclamation as a dogma at the Fourth Lateran Council in A.D. 1215.2 Thomas Aquinas observed that at the words of consecration by the priest, the miracle is performed by the power of God, resulting in the re-creation of the actual body and blood of Christ, though the shape and taste of the elements remain unchanged.3
During the medieval period the Roman Catholic Church further developed the teaching of transubstantiation. It taught that both the body and blood of Christ are present in each element; and that, therefore, the laity, though receiving only the bread, were receiving the whole of Christ. The Supper was seen, moreover, as a pro-pitiatory sacrifice to God.4
But as G. W. Bromley has pointed out, if Christ is substantially present in the consecrated bread and wine, that would make them objects of worship.5 And, indeed, the Roman Catholic Church, coming itself to that logical conclusion, does make the elements into objects of veneration, with the bread and wine receiving the same adoration as the living Christ.6 The Council of Trent (1545-1563) affirmed these teachings.7
The doctrine of transubstantiation does not seem to have the support of Scripture, however. We might note that Christ instituted the Supper before He died as a sacrifice for us. When He pronounced the words “This is my body which is broken for you,” He was physically sitting with His followers in the upper room, an indication that He never meant His words to be taken literally, as the Catholic Church has done.
The Lutheran Position: Consubstantiation
Martin Luther rejected the doctrine of transubstantiation as taught by the Catholic Church. He rejected the idea of a re-creation of Christ by human priests as a sacrifice to God on behalf of humanity. According to him, the bread and wine retain their nature, but there is a miraculous and mysterious real presence of the whole person of Christ—that is, body and blood—in, under, and along with the elements.8 In other words, Christ’s real body and blood (the substance) are present with (Latin com) the bread and the wine.
For Luther, the Christ who was present in the Eucharist was not limited to space and time, for His flesh was not like human flesh. It was sinless and vitally connected to divinity.9 In the doctrine of the real presence, the participant in the Lord’s Supper receives the flesh and blood of God’s Son. Thus in the Eucharist the historic Christ of the first Supper comes again to sinful man. The same Christ who lived and walked among us, who died on the cross, who rose again, and who sits at the Father’s right hand, is the Christ who is present in the Lord’s Supper.10
So in Luther’s Christology Christ cannot be localized. The same Christ who could walk through bolted doors and disappear mysteriously could be present in the bread and wine even when the Eucharist was celebrated in a thousand places at once.11 Those who eat the bread and wine physically partake of the body and blood of Christ. The unworthy communicant also receives the body and blood of the Lord, but to his damnation.12
Luther took literally the words of institution, “This is my body.” He argued that as gold remains gold even when decked by a prostitute, Christ is present in the bread and wine, even when taken by a faithless communicant.13
In Luther’s view the Lord’s Supper is still a sacrament that imparts a certain grace to the communicant. To him the Eucharist is more than a memorial feast; in it is the “eternal food” of which Jesus spoke in John 6. In its observance an eternal reality enters into the life of the communicant.14 Thus, Luther’s only real disagreement with the Catholic doctrine has to do with its belief in the re-creation of Christ’s body and blood at consecration by the priest. He rejected the idea that the priest could re-create Christ. But he still retained the concept of the miraculous and real presence of Christ in the bread and wine.
John Calvin’s view, though not identical, was not significantly different from that of Luther.15
Zwingli’s View of the Lord’s Supper: Symbolic
Ulrich Zwingli’s understanding of the Lord’s Supper differed radically from that of both the Catholic Church and Luther. Though Zwingli believed in a literal interpretation of the Bible, he also recognized in Scripture the presence of images and symbols. Making a distinction between Christ’s natural body (which He had while here on earth), the glorified body He now has in heaven, and the mystical body (which is the church), Zwingli insisted that the words of institution (“this is my body”) must be interpreted metaphorically. This, he believed, is the only interpretation that “made scripture plain, simple, reasonable and humanly intelligible.”16 The only means of receiving Christ, Zwingli argued, is by faith, and one cannot do that by merely eating the bread and drinking the wine of Communion. 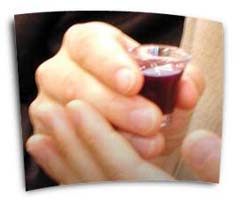 Zwingli called attention to the words of Jesus in the Gospel of John: “‘It is the Spirit who gives life; the flesh profits nothing. The words that I speak to you are spirit, and they are life’” (John 6:63, NKJV).* These words became for him the exegetical key to unlock Jesus’ words at the Last Supper.17 Accordingly, Zwingli interpreted Christ’s words at the Supper: “This is,” as meaning “this signifies.” Since Jesus is seated at the right hand of the Father, His body cannot, at the same time, be in the bread and wine. But Christ is spiritually present to the believer who receives Him by faith.18
According to Zwingli, therefore, the bread and wine represent the body of Jesus, just as a portrait represents a real person, but is not that person. To emphasize the symbolic nature of some of the sayings of Jesus, Zwingli cited statements such as “I am the door,” “I am the vine,” “I am the living water.” Certainly, Jesus did not mean to convey the impression that He was really a door, a vine, or water in a literal sense.19 Such an interpretation would be nonsensical.
In his most complete exposition on the Lord’s Supper, “Amica Exegesis,” Zwingli stressed the centrality of faith in the Christian life. Faith cannot be realized by a mere physical act, even the act of eating of the body of Christ. If it were so, he who administered the Communion would be greater than he who received it. Therefore, the only body of Christ that is on earth is His community of believers who are united to Him by faith.20
What, then, is the Lord’s Supper? Zwingli asserted that it is a common meal of thanksgiving and remembrance.21 Is Christ present at Communion? Zwingli’s answer is “yes.” In what form is He present? Spiritually, not physically. He is assuredly present for the believer who will partake of Him by faith.22 Hence the Supper is a commemoration of the body of Christ that was broken for the sins of the world. It provides a setting for thanksgiving on account of what Christ did for us.
In his reform program Zwingli ordered that Communion bread be carried around by appointed ministers or deacons on large wooden trenchers from seat to seat among the believers. The wine was also to be carried in wooden beakers to all members.23 It was no longer necessary for each believer to come and kneel at the altar, for Communion was not a sacrament. The Lord’s Supper was not a miracle, but a commemoration.24
Zwingli’s Symbolic View—And Ours
Zwingli maintained that in the Communion service individual receive only bread and wine. But by contemplating on the Lord’s death, they receive a spiritual blessing from participating in the symbols. Thus by faith we are lifted up to God’s right hand where Christ sits, there to enter into spiritual communion with Him. Christ is not lowered down to sinful humanity at the table. The bread and the wine are mere symbols of a historic reality, Christ’s suffering and death for a sinful race.25 Faith is the requisite to receiving Christ and participating in His blessing. Without faith there is no benefit derived from the Lord’s Supper.
Among the Reformers, Zwingli gave the clearest view in his exposition of the Lord’s Supper. Emphasizing the words of its establishment as a celebration (“This do in remembrance of me”), he stressed the memorial aspect of the feast. Thus, in this supper the believer “is graphically reminded of and participates in the total drama of God’s redeeming activity in Christ.”26 Our faith is nourished as we participate in this ceremony, vividly recalling the sacrifice of Christ. The memorial feast itself does not bring grace to the participant, but it is an outward sign of the grace the believer has already received. As we participate in the Lord’s Supper, we’re brought by faith into a meaningful communion with Christ, who is spiritually present.
_________________
*Texts credited to NKJV are from the New King James Version. Copyright © 1979, 1980, 1982 by Thomas Nelson, Inc. Used by permission. All rights reserved.

Cliff's Edge
His Wounded Hands
How well will we fare when, with “terrible exactness,” every “secret thing” comes under scrutiny before God?
Magazine Article
Mary’s Prayer
The messenger had promised the Child would be Immanuel! God with us!