e had just come out of a deeply moving week of prayer in our church. Our pastoral staff felt impressed to lead our congregation into a true week of prayer—not a week of preaching or reading. Preaching and reading during weeks of prayer had, in times past, been OK I suppose, but this time, God was taking us to a different place—a place I had never previously been with a congregation.

Over several days our church family and visitors gathered to seek God’s face like we’d never done before. It was a powerful season of the Holy Spirit building simple faith into our lives, counterbalancing the encroachment of complexity pressing in on us. God moved us during that week to a place where we were learning, yet again, to simply take Him at His Word, no questions asked.

Each night of that week we made specific requests of the Lord. The intensity of our intercessions and cries made clear we would not be denied. We asked God to break strongholds off our lives; we asked the Father to release His favor over us; we prayed mightily for our families; we asked God to give us a heart for the lost; we implored God to break the stranglehold of debt from our families; and finally, we asked for healing over every part of our lives through a massive anointing service Sabbath morning that concluded it all. The visitation of the Spirit over the church was as Peter described it in Acts: A time of refreshing . . . from the Lord (see Acts 3:19). 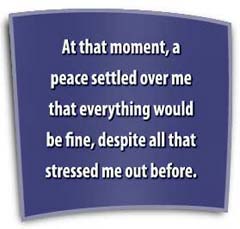 But on reflection, it was not so much the mighty acts of God and the highly charged atmosphere of His presence that came over the place night after night that moved me most; it was the simple reality reinforced in my spirit that we can actually count on God to help us in time of need. I cherished being childlike again in simply trusting the Father’s Word, and that is, He means what He says—period. This desire for childlikeness and simplicity of faith was tested in short order.

I had to catch a flight right after the Sabbath services for a leadership event I was scheduled to do the next day on the West Coast. The services had run long, and it was difficult to bring to a conclusion all that God was doing that day, not to mention the preceding week. When I finally got to my car, I noticed the clock on the dashboard indicating that I had exactly 27 minutes to make my flight, and the airport was 15 minutes away. It was also the last flight of the day to my destination.

As I went through traffic to the airport, I became increasingly stressed and anxious, thinking there was no way I would be able to make the flight. Even if I made it to the airport and was able to access my ticket at the kiosk, the security checkpoint would probably stop me dead cold. I could feel the icy fingers of anxiousness engulfing my heart. Then, my wife (who was taking me to the airport), observing the anxiety building in me, spoke a gentle word, “Be anxious for nothing, but in everything by prayer and supplication, with thanksgiving, let your requests be made known to God” (Phil. 4:6, NKJV).*

Here it was, the moment of truth following that most powerful week: Would I take Him at His Word? I whispered a brief prayer. “Father, I choose not to be anxious over my need to make this flight. Therefore, I make this simple request; please open the traffic, move me through quickly at the ticket counter, clear a path for me in the security area, and get me on the plane in time. I ask, believe, receive, and thank You for Your blessing in this matter, amen.”

At that moment, a peace settled over me that everything would be fine, despite all that stressed me out before. Even if I didn’t make that plane, I believed that God had it all under control, that He didn’t need me to be anxious about any of it.

I made the plane!