What if Jesus Were the CEO?

HE NEWSPAPER AND TELEVISION NEWS in the is filled daily with numerous stories about corruption and the lack of ethical leadership in the corporate world. The Enron Corporation’s name is synonymous with greed and deceit.1 Most of the general public believe that big business cannot be trusted and, by default, that the leaders of big business lack moral values. It is not fair for an entire group of people to be labeled, but people know only what they see and hear.

The media rarely touts the good news of a CEO who did the right thing, let alone one who does the right thing on a regular basis. Is the term “successful Christian businessperson” an oxymoron? Is it possible for a strong Christian man or woman to lead a large corporation to success for the long term? If Jesus lived in our midst, could He be the CEO of an Enron or Exxon-Mobil? And if He were, what would that kind of corporation look like?

We don’t have any trouble recognizing in Jesus the qualities that we seek as Christians in our personal lives. How compatible are the qualities of Jesus with the qualifications we tend to associate with corporate leadership? Would Jesus have what it takes? 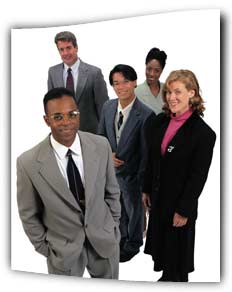 Most of the examples we have of Jesus in the position of leadership are related to the time He spent with His disciples. They followed Jesus even when He led them into opposition with the local rulers. Jesus knew His followers, and He genuinely cared about their needs and their growth. Jesus knew how to access talent and how to help individuals understand the gifts they had been given. He saw every person as valuable, with something to offer the group. That is leadership.

He did not have any trouble taking charge when He saw something wrong, whether that was feeding multitudes of people who had come to hear His version of the habits of effective people, or clearing the so it could serve its intended purpose. Teaching and taking action are qualities of leadership.

Jesus had political acuity, even though He seemed to have little patience with politics and never sought to use it to further His agenda. He stood up to the Pharisees and challenged their power with His own. He was informed and intuitive about the politics of His time. I suspect He was saddened when He saw how people allowed politics and power to control their lives. Yet He knew of a positive power that He wanted people to take hold of—the power of His love and His way of living. That tells me that power in and of itself is not bad but that a leader must be careful of the type of power he/she seeks.

Many people would argue that a successful business leader must possess the qualities of aggression and greed or they will not survive. However, many companies succeed when their focus stays true to meeting the needs of their customers, stakeholders, and employees. Survival is often based squarely on the company’s ability to identify those needs and find innovative ways to offer satisfaction. When organizations overreach the mission of needs fulfillment and begin to grasp and grow simply for greedy purposes, they step into risky territory. Organization theory cautions against expansion not clearly tied to mission and values. Did anyone ever identify the needs of people better than Jesus? Did anyone ever satisfy those needs with exactly the right solution better than He did?

Humility is generally not associated with the qualities of an executive leader in corporate , but perhaps it should be. Sherron Watkins was the whistle-blower in the Enron scandal, and she recently wrote this about corporate leadership:

“I still wonder whether we truly recognize and value the appropriate traits in our leaders. We want honest leaders who are decisive, creative, optimistic, and even courageous, but we so easily settle for talk that marks those traits instead of action. Worse, we often don’t even look for one of the most critical traits of a leader: humility. A humble leader listens to others. He or she values input from employees and is ready to hear the truth, even if it is bad news” (Time, May 28, 2006).

Perhaps the Man who washed the feet of His subordinates would be just the right person to teach the corporate world about the quality of humility.

I believe Jesus has the qualifications to be CEO of a major corporation. But it would be a corporation very different from what we see on the news.

Jesus’ corporation would have a clearly stated mission founded on the principles of truth, honesty, and service. It could be any type of organization in almost any industry as long as the product or service meets a real need people have. It would be hard to imagine Jesus even being interested in leading a corporation focused on a product or service that was unnecessary, unhealthy, or detrimental to society. 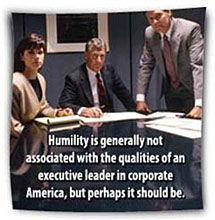 Every corporation has its own culture and structure. A corporation led by Jesus would not be mechanistic but would allow for independent thinking, growth, and action. Communication in this organization would be open and honest—but always constructive. The door to Jesus’ office would always be open to every employee, from the CFO to the janitor. He would know every name, but more important, He would want employees to know one another’s names. And not just their names would matter, but their skills and weaknesses, their joys and their struggles—these would also be vital. This would be an open organization with opportunity for advancement, but with even more opportunity for collaboration and teamwork. Some business thinkers would argue that not every person is equipped to work in that type of environment, but maybe Jesus would know how to utilize each employee’s talents in the right place on the organizational chart for their betterment as well as for the success of the company.

Corporations require some system for control and organization of activity. The organizational structure outlines those functions so that everyone understands

his or her role. In a bureaucratic organization there are rules to follow and clear lines of authority. But authority in reality is not bestowed by drawing a line on a chart. Authority may come from rational or legal mandates. It may also come from traditional understandings, a legacy from ages past. Or it may be charismatic authority based on faith and devotion of those subordinates who believe in their leader. Perhaps Jesus would utilize all three types in leading His corporation.

The Bible indicates that there is a place in our lives for rules, but rules are based on principle and loving guidance. Of course, any Christians on the team would have no trouble accepting Jesus’ authority from a traditional sense. Any skeptics or new employees would quickly see the charisma in Jesus’ caring attitude and careful, thoughtful approach.

The Bible story about the Samaritan woman is clear proof that Jesus would not allow discrimination in His company.2 But would Jesus hire lukewarm Christians? During His time on earth Jesus demonstrated such strong, intuitive people skills that He could see people’s hearts even without using His divine powers. He would not be afraid to take all comers as long as they accepted the culture He designed. After all, He allowed Judas to be a disciple, even after He knew that Judas would betray Him in the end.

Here is an interesting question: would Jesus hire a Muslim? That question will make a lot of readers squirm. In my imagination I see this corporation led by Jesus, the CEO, as a lighthouse. Undoubtedly it would make Fortune magazine’s list of “100 Best Companies” to work for. That would attract employees from all parts. This company would not hide its light under a bushel. No. So it is possible that people from all faiths would be, at the very least, curious about working there. If one applied, Jesus would hire him. When did Jesus ever turn anyone away? What better way to share His love than to invite people in?

Ethics, Conflict, and the Human Dimension

Business research indicates that ethics and values leadership is instilled in an organization from the top down, and it is nearly impossible to inspire it any other way.3 Jesus would know this, and He would know how to make it happen. He has led and inspired us in moral leadership from the top down for more than 2,000 years. 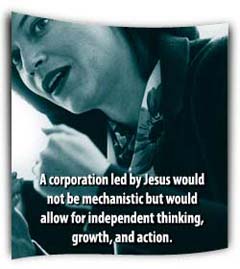 Where there are human beings, there is conflict. Every organization on earth is prone to conflict among the people within it. Think about the local church full of saints who often disagree and argue. I’m sure Jesus’ company would be the same. Jesus would lead His managers and all employees to follow the biblical directives about resolving conflict by an initial conciliatory conversation between the two parties, escalated to a manager in cases where the issues were not resolved. Each manager who worked for Jesus would be trained formally and by Jesus’ example in how, thoughtfully and prayerfully, to work through the conflict.

I’m not sure (or the world, for that matter) would know how to respond to a completely ethical, socially responsible major corporation. It is possible for one to exist, but it would take some time for the evidence to supersede the skepticism. Jesus would not tolerate unethical behavior in any part of His organization. He would institute this by example, of course, but in any case where someone did not adopt His example and did not respond to admonition, that person would be asked to leave the company.

Willful disregard is a different thing than moral immaturity. Surely Jesus would seek every possible way to redeem an errant employee, but there would be zero tolerance for behavior that was harmful, untruthful, greedy, or questionable in any way. Jesus could and would fire someone who clearly was unwilling to be morally led to better ways. What kind of leader would Jesus be if He were not able or willing to stand up for what is right? It would hurt His heart, yes, but He would do it. Justice has its place in Jesus’ corporation just as mercy and love have their place.

An Example for Me

Jesus will not be a CEO in corporate in my lifetime, so my thinking is only speculative. But I want it to serve another purpose. As an executive leader in my own little part of the business world, I want to learn to lead as Jesus would lead. I want a foundation for my decisions so that what I do as a manager is consistent with my Christian values. I want my office to be a faith-based corner of the corporate environment.

There can be moral, ethical leadership even in the largest of corporations. But only believing it will not make it happen. Jesus-inspired business leadership is up to each Christian in a place of authority. With His leadership in our lives, it can be a reality in the business world—and in our church.

3This is standard textbook material in business courses across the nation. For an easily accessible article on leadership values and ethics, visit:humanresources.about.com/od/leadership/a/leader_values.htm.

Sarah J. Proctor, a vice president of finance for a nonprofit organization in Fort Worth, Texas, wrote this for a graduate class she took in 2006 at Southwestern Adventist University in Keene, Texas.