rayer is a lot like radio. We seat ourselves alone, perhaps in a small room, and talk to the wall in the hope that someone—somewhere—is listening. Through a process and technology we barely understand, we try to reach out to the unseen listener. But we cannot even begin to imagine what might lie beyond the blank walls in which we are encased.

Then, every so often, there is a response, faint though it might be. A voice comes back; a message of encouragement—or even criticism. The important thing is the response. We are briefly reassured: Someone is out there.

It is perhaps most difficult in times of suffering and anguish to reach beyond our tiny, bare-walled rooms, to hope for anything or Anyone beyond them. Even our prayers—our attempts to communicate with the “outside”—can add to our pain. Reflecting on his own experience of sorrow, C. S. Lewis commented on the seeming suffering in prayer: “And one prays; but mainly such prayers as are themselves a form of anguish.”1 When our prayers just seem to bounce back to us from the surrounding walls, the room seems smaller still, and the ricocheting pleas wound us further. 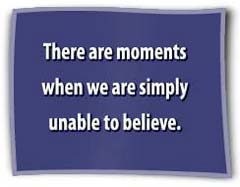 While there is a sense in which suffering is easier for a person of faith—having a hope and strength beyond ourselves—there is also a sense in which suffering is complicated and rendered more difficult by belief. “The ‘hiddenness’ of God perhaps presses most painfully on those who are in another way nearest to Him.”2 For those of us who live in the expectancy of His presence and goodness, God’s apparent absence and silence compounds our pain and fear.

And there are moments when we are simply unable to believe; when a primitive nothingness is our only visible option. They may be only moments, but by sheer force of will or habit we still cry out. And in some incredible way the cry of hopelessness is still a prayer.

Robert McCrum was a successful publishing executive who suffered a severe stroke at just 40 years of age. He describes his year of fear and frustratingly slow recovery in My Year Off. Despite his avowed atheism, he finds himself reaching out to something in describing his periods of greatest desperation. He reflects, “I pray to a God I don’t believe in. But I had an absurd thought the other day that the thing about God is that even if you don’t believe in Him, He listens to you.”3

Even in the moments when we are so hurt, grief-stricken, or frightened that we cannot see any way to reach out to God, He hears those cries—and in His humility and graciousness, they can “count” as prayers. Maybe that’s something of what God meant in His promise that “I will answer them before they even call to me.”4 Before we are able to summon the willpower, the focus, the right words, or whatever we think we might need to pray “properly,” God is already answering. In prayer, it seems the readiness of God to listen is infinitely more important than our readiness to pray.

In his novel Lilith, George MacDonald has one of his characters discover a tiny flower he is unable to identify. The character asks his traveling companion about this mysterious bloom. The raven tells him it is a unique prayer-flower: “Not one prayer-flower is ever quite like another.” The character is overwhelmed by its beauty, its form, its color, and its scent. “I did see that the flower was different from any flower I had ever seen before,” the character reflects. “Therefore I knew I must be seeing a shadow of the prayer in it; and a great awe came over me to think of the heart listening to the flower.”5

That heart is the heart of God. The heartbeat that sustains the universe pauses to hear our stumbling, desperate, and even doubting cries.