ERHIY BOSHCHUK, 23, threw open the door of his apartment and waved me toward the living room. His roommate, Valery Karpuk, 20, hastily straightened a bed that stood against the wall. “Have a seat,” he said. “You won’t get your pants dirty.”

My eyes widened. The apartment’s ceiling stretched at least four meters (12 feet) above our heads. Five large windows in the living room offered a stunning panoramic view of snow-covered downtown .

Serhiy noticed my surprise and smiled. “This apartment costs $500,000,” he said, the figure casually rolling off his tongue. “The owner is a lawmaker.”

“A lawmaker with the Russian parliament or the city legislature?” I asked.

An Instant and Common Bond

It was a cold Sabbath afternoon in late December. The three of us had met at the . Serhiy and Valery had approached me in a subway car after the service. Seeing me alone, they invited me to lunch. 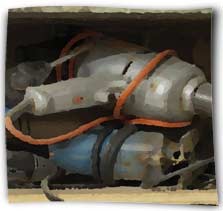 During the 45-minute ride to their apartment, Serhiy—tall, dark, and stocky—told me that he and Valery came from Torchin, a Ukrainian town of 5,000 people near the border with . Grinning broadly, he said he was single and looking.

Valery—short, blond, and thin—said he had a wife and 20-month-old daughter, Karina, whom he had not seen in five long months. “But we leave Monday and will be home in time for New Year’s,” he said. It was his turn to grin. “I can wait two more days.”

Their apartment building turned out to be a brand-new palatial high rise, complete with a uniformed concierge and several security guards at the entrance. We walked through the white marble lobby and took the freight elevator to the seventeenth floor.

Inside the apartment, the walls, ceilings, and floors were bare, gray concrete. The dank, earthy smell of fresh cement filled the air. Lightbulbs dangled on loose wires overhead, swinging occasionally as the brisk winter wind somehow found its way in. Heating and water pipes wound up the walls. A thin layer of cement dust coated everything.

Two narrow beds stood in the center of the future master bedroom, while a third served as a couch in the living room. A rickety bench and a wooden table lined one wall. On the table stood a dusty television set, several faded mugs, and a wrapped loaf of bread. Valery bent over a large yellow cooking pot on a hot plate on the floor. “I hope you like buckwheat,” he said.

Serhiy and Valery—like tens of thousands of other migrant workers from and other former Soviet republics—construct and finish the interiors of homes in and around . They earn up to $700 a month, a fortune compared to the $70 a month they would get in . Serhiy and Valery were staying in the apartment rent-free while they worked. Serhiy worked to support his parents, but as a New Year’s present to himself he had bought a new Sony Ericsson cell phone for $500. Valery had splashed out a few hundred dollars on a DVD player and home theater sound system to surprise his wife.

Valery soon ladled out steaming bowls of boiled buckwheat mixed with carrots and small chunks of fish. As Serhiy sliced the bread, he told of his last job, building a four-story villa for a fashion designer outside . Seeing my interest, he said, “That was nothing. Valery’s previous job was in a $2 million mansion owned by a businessman who had a chain of 56 stores in .”

I asked whether keeping the Sabbath was a problem. Serhiy shook his head. He said their employer, a construction subcontractor and fellow Ukrainian, had initially complained when he learned that they would not work during the Sabbath hours. But he quickly changed his mind after seeing that they worked hard and did not drink alcohol, unlike many of his other workers.

Serhiy recalled furbishing a luxury apartment owned by a woman from . On his first day on the job, a Friday, the woman had insisted on watching and directing his every move. After several hours, she told him to start counting kitchen and bathroom tiles. Serhiy, however, declined, explaining that he was an Adventist and would not be able to finish counting before sunset. He braced himself for a torrent of abuse, but the woman instead smiled and visibly relaxed. “A couple of fellows who helped build this apartment were also Adventists,” she said. “Adventists are good workers.”

When Serhiy laid the last tile in the apartment a few days later, the woman lavished him with praise. She said it would have taken a group of regular workers twice as long to complete the job he had single-handedly carried out.

I then scraped the last spoonful of buckwheat from my bowl, my stomach warm and pleasantly full. Valery spread a thick layer of butter on a slice of bread and sprinkled white sugar on top.

I looked at the two earnest young Adventists who had welcomed me into their home, and the words of Jesus sprang into my head: “In my Father’s house are many mansions: if it were not so, I would have told you. I go to prepare a place for you” (John 14:2, KJV).

While Serhiy and Valery are sharing their faith and building mansions for rich people in , Jesus is surely building a mansion for them in heaven.

Andrew McChesney is a journalist who spent 10 years living and working in .