While canvassing one summer, I often heard that phrase. Maybe others who’ve canvassed or passed out tracts have heard those familiar words too. Prospective buyers would listen intently while I went through the cookbooks; but the moment they saw that my material was of a Christian nature, everything went down the drain. “I’m all set,” they’d say with a smile. Translation: “I’m fine. All is well. If you’re offering Jesus, I’m not interested. But thanks for stopping by!” And with a wave, they’d promptly close the door.

I would feel angry at them and would think: If Jesus said that the harvest is great, how come everybody is “all set”? Don’t they see that they need Jesus too?

A few more days passed. Then my anger turned inward. Is something wrong with me? Why can’t I get through to them? I experienced a never-felt-before blow to my self-esteem. But after hearing the dreaded phrase a few dozen times more, I started to notice a trend: most of the “all set” respondents lived in upper-class neighborhoods. Theirs were the mansions sprawled on freshly manicured lawns, with the driveways that went on forever. I could spot them instantly.

I couldn’t bear canvassing these homes, realizing firsthand that it truly would be easier for a camel to fit through a needle’s eye. Whenever my leaders drove around these parts, looking for corners on which to drop us off, I hunkered down in my seat, hoping, praying, that they wouldn’t call on me.

But they always did. And for good reason, too. Looking back, I believe God wanted me to see how people can neglect Him so much that they no longer sense a need of Him. He also wanted me to see that He laid down His life for every one of them.

From Anger to Compassion 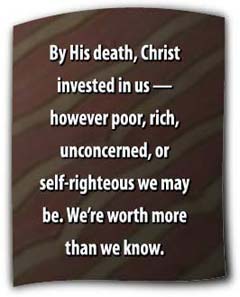 By the end of that summer, my feelings had changed. I felt compassion toward the people who’d refused to hear me out. To me, they were like the lost coin in the well-known parable of Luke 15. Here, Jesus told a series of parables involving

the lost and found. The story of the sheep and prodigal son encourage us when we’ve strayed away from God. They also comfort us during times when a loved one is spiritually lost. The prodigal son is probably one of the most loved. And the story of the lost sheep leaves us feeling grateful over how far Jesus will go to save one lost soul.

But the story of the lost coin is one that doesn’t initially produce those warm, fuzzy feelings. Sure, it’s a nice story about how a woman rejoiced to find her lost money (how many of us wouldn’t?), but it doesn’t always strike the same chord.

Every parable Jesus told was for our salvation. There’s a good reason why the parable of the coin is included with the others in the passage. In fact, Luke’s account is the only Gospel in which it appears. It begins with the parable of the lost sheep. The sheep knew it was lost; it just didn’t know its way back to the shepherd.1 In a similar manner, the prodigal son knew he was lost, but he knew his way back home. In contrast to the two, however, the coin didn’t know that it was lost, and it certainly didn’t know the way back. The lost coin represents those who are lost in sin but have no idea of their condition. They’re not anxious to change, and in a sense, have become “all set.”

The woman in the parable had 10 coins amounting to a large sum of money. But one became lost. Yet instead of forgetting about it or absorbing the loss, she diligently searched for it. She probably turned her entire home upside down looking for this piece of silver. She lit a candle to see better and began to sweep, hoping to reach it.

The parables point to a different aspect of being lost, yet each paints the same beautiful picture of the joy Jesus has in finding us.

I can relate to the story of the lost coin not only because I encountered some while canvassing, but also because recently I was like a lost coin myself.

I went to church on Sabbath, attended Wednesday night prayer meeting, returned my tithe, and prayed. I didn’t drink or smoke, and I ate a vegetarian diet. I didn’t do anything bad, so to speak. I believed I was an overall good person. I thought I had arrived and was waiting for Jesus to come. But one day the Lord led me to pray a prayer asking Him to show me if there was anything in my life that needed changing. Not thinking that He would find anything, I didn’t expect an answer.

After the prayer, for about a week I had a strong impression that there was indeed something in my life that needed changing. I felt I’d been robbing God by not giving faithful offerings. I was sure to give a faithful tithe, but my offerings were almost nonexistent. I didn’t want to face the fact that God required a faithful tithe and offering. I justified myself by saying I was a grad student trying to support myself on a meager income. Any loose change I sporadically scraped up that came to no more than $2 became my offering.

As I came closer to God’s truth, however, my heart was convicted that I wasn’t “all set.” I became anxious. I can’t afford to give a faithful, freewill offering! My lack of faith was getting in the way of obeying and pleasing God. For a split second, I kind of wished that I hadn’t prayed that prayer. I was comfortable in my little corner thinking all was well. But I prayed again, asking the Lord that if He was serious that I give more faithful offerings, to show me, because I truly didn’t know how to do it properly. 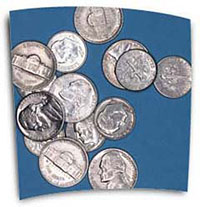 I got up, turned on my radio, hoping to hear some relaxing music, and I was pleasantly surprised to hear the Voice of Prophecy, with Lonnie Melashenko, playing. That’s funny, I thought. I didn’t even know my radio picked up that station. I listened, waiting to hear the message for the day. Then I heard him repeat Malachi 3:8: “Will a man rob God? Yet ye have robbed me. But ye say, Wherein have we robbed thee? In tithes and offerings.”*

I was scared for a moment. The topic was specifically about giving offerings! Right then, I knew God had answered my prayer.

The program pointed me to various scriptures outlining the purpose of offerings and how we are to give them. It also mentioned Patriarchs and Prophets by Ellen White, which backed up the scriptural support.

God delights in the restoration of His children, and I’m sure He and His angels rejoiced when I finally made the decision to faithfully give to Him freely as He has given to me. The Lord seeks for lost “coins.” He is “not willing that any should perish, but that all should come to repentance” (2 Peter 3:9).

Hidden Areas of Our Lives

Are we like the lost coin? Are we oblivious to areas in our lives that need improving? If we’re in danger of becoming like the lost coin, there is hope. Remember getting progress reports in grade school? Some classmates loved progress report day, while others absolutely hated it. It was helpful, though, because in addition to knowing what assignments we were missing, we also knew our status, giving us a chance to raise low grades. Progress report day was a real eye-opener for some.

To guard against becoming like lost coins, we must regularly ask God to give us a spiritual progress report. We can examine ourselves, and like the rich young ruler, inquire, “What do I lack?”2 When we ask that question, we can be sure that Jesus, the Light, “illumines the secret chambers of the soul, and the hidden things of darkness are made manifest.”3

God has a million and one ways to reach us. It may be through the media, a trusted friend or family member, or a stranger at our doorstep. Whichever way He seeks us, He does it diligently. Why did the woman continue looking for her coin? For the same reason Christ keeps knocking on our heart’s door. The coin was worth something. It made up a significant part of her savings. “In this parable Christ teaches that even those who are indifferent to the claims of God are the objects

of His pitying love.”4 We all have a responsibility to work diligently on behalf of our families and neighbors. By His death, Christ invested in us—however poor, rich, unconcerned, or self-righteous we may be. We’re worth more than we know.

I can imagine how ecstatic the woman felt when she found her piece of silver. She swept and swept until she found it. She might have heard its tinkle, or seen its faint glimmer from the light’s reflection. Either way, she plucked it up, and in my mind’s eye I can see her jumping up and down. She was so happy that she called her friends and neighbors and had a victory party. It was probably still covered in dust. But that didn’t diminish its value.

“Likewise, I say unto you, there is joy in the presence of the angels of God over one sinner that repenteth” (Luke 15:10). Yes, there is hope for lost coins.

*All texts are from the King James Version.

Lahai McKinnie is working on a master’s degree in social work at . When she’s not studying, she enjoys writing, being in the company of friends, and spending time with her husband.