ecently I attended my first football game at Qwest Field to watch the Seattle Seahawks squeak by the St. Louis Rams. It was a thriller that had Josh Brown nailing a 38-yard field goal with nine seconds left. (I like to think it was my raucous cheering that lifted the Seahawks to victory that day.)

Having heard a lot about the stadium, I was anxious to experience it for myself. Allegedly, Paul Allen, the owner of the Seahawks, hired the best architects around and asked them to design the noisiest stadium in the world. They did a fine job. It was deafening. In fact, there have been accusations against the Seahawks that the noise is artificially enhanced.

Referencing a game against the New York Giants, Foxnews.com reports:

New York had an astounding 11 false-start penalties.  Giants’ players said the flags were because of Qwest Field's earsplitting noise.
Opponents committed 24 false starts during last season at Qwest, more than in any other NFL stadium.  Arizona had four more in Seattle's home-opener win…..
“It was very loud, but it has that reputation,” Coughlin said of the Seattle's crowd. “The crowd gets into the game and they use the crowd well.”1 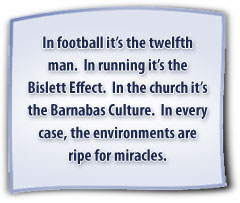 In football it’s called “the twelfth man” because it’s like having an extra player on the home team. In running it’s called the Bislett Effect.
The name comes from Bislett Stadium in Oslo, Norway, a place where 62 track-and-field records have been broken over the years.  No other venue in the world comes close to boasting of such a record.
Quoted in Runner’s World (November 2003), the famed British runner Steve Cram said, “If you can’t run well at Bislett, you can’t run well anywhere.”
So what’s the secret of Bislett?
In a word, it’s the crowd. The track is narrow, with only six lanes, and the grandstand is so steep that the fans are practically on top of you.  “The sound of 21,000 screaming maniacs rakes your reflexes,” says runner Kenny Moore, “forcing you to keep your rhythm, the crowd’s rhythm, for one more stretch, one more turn.  The frenzied fans keep you going.”2
In football it’s the twelfth man. In running it’s the Bislett Effect. In the church it’s the Barnabas Culture. In every case, the environments are ripe for miracles.
The name, Barnabas Culture, comes from Joseph, an active participant in the early Christian church. However, we don’t know him by his name; we remember his nickname, Barnabas, which means “Son of Encouragement,” or simply “The Encourager.”
Just as the twelfth man spurs on the home team in football, and the Bislett Effect brings out the best in runners, so the Barnabas Culture creates a climate where church members flourish in supernatural ways. So what does the Barnabas Culture look like?
A Culture of Generosity
First, the Barnabas culture is one of generosity. We see this characteristic in Barnabas when we first meet him in Acts 4:36-37. “Joseph, a Levite from Cyprus, whom the apostles called Barnabas (which means Son of Encouragement), sold a field he owned and brought the money and put it at the apostles' feet.”
As a Levite, you would expect Barnabas to serve in the temple at Jerusalem.  After all, he was a Jew from the tribe of Levi.  Because he was from Cyprus, however, Barnabas was a “Hellenist.” Hellenists were Jews born overseas, thus they were treated as defiled Gentiles. In Acts 6 we get a snapshot of the hostility between native-born Israelites and the Hellenists. No doubt Barnabas was ostracized by the Jewish community.  Thus you might expect him to hold a grudge, but there is no hint of a sour spirit in Barnabas. Instead he sees a need in the church and does something about it. He liquidates some real estate and puts “the money at the apostles’ feet.”  In other words, he has confidence in the church leadership and he donates the money with no strings attached. “Generosity with strings is not generosity;” quips Marya Mannes, “It is a deal.”3  In the case of Barnabas we see genuine generosity.
So it is in the Barnabas Culture. Everyone is generous with their time and talents and money. It makes for a great place to be.
A Culture of the Acceptance
The second characteristic of the Barnabas culture is that it is marked by a spirit of acceptance. The next time we see Barnabas is in Acts 9.  Saul (later named Paul) has been a terrorist to Christians.  He’s been “…breathing out murderous threats against the Lord's disciples” (Acts 9:1).
Then Saul meets Jesus.  And everything changes. Suddenly Saul wants to join the disciples in Jerusalem! But the followers of Jesus are afraid of Saul. It would be like Osama Bin Laden applying to work for the Transportation Security Administration. Why would the disciples trust Saul?
Nobody wanted to mess with Saul. That is, nobody but Barnabas. Barnabas was willing to take a risk on Saul.  He believed the best about Saul and the Bible records, “So Saul stayed with them and moved about freely in Jerusalem, speaking boldly in the name of the Lord” (Acts 9:28).
Think about the impact Paul has had on Christendom. Besides Christ, Paul is arguably the most influential voice of faith throughout the centuries. But what would have happened to Paul if not for Barnabas? Chances are we’d know nothing about this great theologian who has so forcefully advanced the cause of Christ.
In Acts 11 we find Barnabas showing the same acceptance to all Gentiles. When members were squawking about keeping the church undefiled, Barnabas was posting the sign, “Everyone is welcome… Absolutely everyone!”

Jerry Cook offers this challenge to the church today:

The church should state, “We’re going to love and accept people, and if you don’t want to love people, you’re in the wrong place. Because this church is going to love people.”Unreserved acceptance of people should be a habit with us. There’s no other way to get close enough to people to help them at the level of their deepest needs. When we cultivate the habit of accepting people, they open up to us, they like us, they trust us instinctively.
A Culture of Forgiveness
The final characteristic of the Barnabas culture is forgiveness. We see in Barnabas a heart that is quick to forgive the mistakes of John Mark. Mark traveled with Paul and Barnabas to help them for a while, but we’re told that “From Paphos, Paul and his companions sailed to Perga in Pamphylia, where John left them to return to Jerusalem” (Acts 13:13).
No one knows for sure why John Mark deserted them.  Acts 15:36-41 records this story:
Some time later Paul said to Barnabas, “Let us go back and visit the brothers in all the towns where we preached the word of the Lord and see how they are doing.”  (37) Barnabas wanted to take John, also called Mark, with them, (38) but Paul did not think it wise to take him, because he had deserted them in Pamphylia and had not continued with them in the work.  (39) They had such a sharp disagreement that they parted company. Barnabas took Mark and sailed for Cyprus, (40) but Paul chose Silas and left, commended by the brothers to the grace of the Lord.  (41) He went through Syria and Cilicia, strengthening the churches.
Now Paul was a pretty formidable guy, and to confront him as Barnabas did required guts. I can imagine Barnabas saying, “Hey, pal. Remember when nobody wanted to give you a second chance in Jerusalem? Who rescued you? And now you’re telling me that you won’t give a second chance to John Mark?” 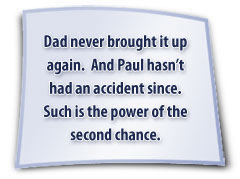 Paul and Barnabas part ways over the issue. Ironically, at the end of his life Paul would write to Timothy, “Get Mark and bring him with you for he is helpful in my ministry” (2 Timothy 4:11). Again, we can only speculate: What if Barnabas had given up on Mark?
Still today, if churches want their members to excel spiritually, they must create a climate where forgiveness flows. Churches must become known as Institutions of the Second Chance.
Whenever I think about the power of the second chance, my mind drifts back to the time my family moved from Virginia to the West Coast. My younger brother Paul had just landed his driver’s permit. As you would expect he was more than mildly anxious to drive.
“But Paul, we’re pulling the Nimrod camper,” my dad said. “It’s not the same as just driving the car.”
Paul, however, was convinced that he was a trucker—even had his own handle (“Flash Lightning”) on the CB radio. By Kansas City the nagging reached the unbearable point and dad surrendered the steering wheel—but only under strict surveillance. Over and over dad echoed the caution, “Take it slow.”
Just outside of Hammett, Idaho, Paul took the exit to refuel. He never noticed a sign displaying the exit ramp speed so I guess he figured there was no limit. As the road curved around, however, Paul misjudged the turn and caught the camper tire on the edge of the road. He was doing 60 MPH when he overcorrected, causing the trailer to flip into the ditch.
Everybody was okay. The trailer axle, however, was irreparably damaged. The mishap translated into a 2-day impromptu vacation in a one-gas-station-town that resembled Survivor Island.
Two days and a few hundred dollars later we were ready to get on the road again. As we loaded up the car, Paul sheepishly crawled into the back seat. Dad looked at him with an incredulous expression. “Paul,” he demanded, “what are you doing?”
“Um, we’re ah ready to go, aren’t we?”
“Yes,” Dad said. “So what are you doing? We need to get there.” With that he flipped the keys to Paul and said “You’ll have to get in the front seat to drive.”
Dad never brought it up again. And Paul hasn’t had an accident since. Such is the power of the second chance.
Creating a Barnabas Culture
Now it’s our turn. God is calling you and me to be like Barnabas. How? Live generously. Accept all people. Be quick to forgive. Then marvel at the miracle of the Barnabas Culture.
1As quoted at http://www.foxnews.com/wires/2006Sep20/0,4670,FBNSeahawksaposNoise,00.html .
2As quoted at http://www.homileticsonline.com, “The Bislett Effect,” 2/24/2005, a paid sermon subscription service.
3As quoted at http://www.quotationspage.com/search.php3?Search=generosity&startsearch=Search&Author=& C=mgm&C=motivate&C=classic&C=coles&C=poorc&C=lindsly.
4Jerry Cook with Stanley C. Baldwin, Love, Acceptance & Forgiveness (Ventura, CA: Regal Books, 1979) p. 17.

Closer Look
Dirty Work
“The powerless must do their own dirty work. The powerful have it done for them.”
Magazine Article
The Lullaby of Christmas
It’s the message that soothes our soul.