Challenged by the Truth

COME FROM THE BIBLICAL city of Nineveh, in Iraq. I was born into a Christian home. My parents belonged to the Orthodox Church. My mother read the Bible daily and took me to church every week.
One Friday afternoon in 1969, my cousin and I played backgammon until we got bored and decided to take a walk. We came to a church. A sign outside the building advertised a movie about the life of Jesus Christ. We went inside.
After the movie the pastor presented a message about watchfulness. He said Christ took His disciples to Gethsemane to pray with Him, but they slept. What about us? he asked.
The message touched my heart, and I went to the pastor and asked him to study the Bible with me. That process lasted more than four years. My understanding that Jesus is my Lord and Savior deepened, and I felt His love. 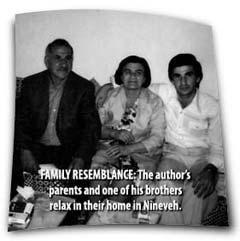 But I was also confronted with the Sabbath. I struggled with it for two years. When I was convinced that, according to the Bible and the example of Jesus Christ, the seventh day is the Lord’s Day, I thought of the problems I would face if I kept the Sabbath and joined the Adventist Church. I thought of my family and friends.
Families in the Middle East are very close. Changing your faith is essentially denying your family. I also thought of my education and my job. I would lose all of them because in Iraq Friday is the day of worship, and everyone has to work the rest of the week, including Saturday and Sunday.
I started to rationalize, What difference does it make to keep the Sabbath? Every day is the Sabbath day. You just choose one day, and the Lord will understand.
But the Holy Spirit reminded me that the Sabbath is part of the Ten Commandments. Jesus kept it; His disciples kept it.
During that time I visited with pastors from every church and denomination I could find. I came out of those meetings more convinced that the Sabbath is God’s holy day, and that in order to honor God I must keep it holy.
Decision Time
When I graduated from high school I received a scholarship for four years of college education. Education was my opportunity to live a happy life. But my first year at the university was one of the hardest years of my life. I was caught between Christ and the world.
At the end of the school year, with final exams coming in a few weeks, my mother asked me to go to church with her. In order to make my mother happy I went with her to the Orthodox church. The occasion was the celebration of the ascension of Jesus. The bishop stood in front of the large crowd gathered and said, “Something happened to me last night that never happened before. 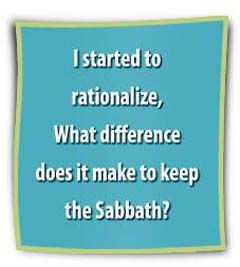 The Lord awakened me and gave me another message for you. The new message is about martyrdom.”
The last subject I wanted to hear about was martyrdom. I wanted to hear about faith, hope, or positive thinking, not martyrdom. But that sermon was a defining moment; it changed my life.
The bishop talked about the sacrifice Jesus made on our behalf; how the King of the universe stooped down, became a man, lived, suffered, and died for our sake. “God is calling us to follow the example of Jesus,” he said, “to forsake all and follow Him.”
Then the bishop read from the Gospel of Matthew: “And every one that hath forsaken houses, or brethren, or sisters, or father, or mother, or wife, or children, or lands, for my name’s sake, shall receive an hundredfold, and shall inherit everlasting life” (Matt. 19:29, KJV). I heard the Holy Spirit telling me that following Jesus was worth it. God brought peace to my heart.
I walked from the Orthodox church to the home of the Seventh-day Adventist pastor and asked to be baptized. I told him about my fear of losing my family—my brothers, my father, my mother, my friends. But I also told him about the assurance the Lord gave me that day.
Reaction: Swift and Severe
The following Sabbath was the hardest of my life. I had several final exams. I woke up at 5:00 a.m. and had a tremendous struggle. It was as if the devil was saying, “Just take the exams. One more Sabbath and you will have the whole year under your belt. The Lord will understand.”
But the Lord seemed to say, “Follow Me. Make Me number one in your life.”
At noon I went to the church and made my public commitment to follow Jesus. I was baptized in the name of Jesus and started to keep my first Sabbath.
Because I didn’t take those three exams that Sabbath, I lost all my credits for the first year in the university. Iraq operates on the English system, and not taking two or more exams means having to repeat the entire year.
I lost the credits for my second year at the university for the same reason. Failing those two years meant the loss of my scholarship, which was supposed to cover my four years of education.
When my father learned what had happened, he called all our relatives and asked them to come to our house. At least 100 people crammed into our living room. It was impossible to get all those people together for a family reunion, but when they heard I had started keeping the Sabbath, they all came to talk me out of it.
It seemed as though everybody was talking at the same time. I was confused and stressed. Finally, when my dad realized he was getting nowhere with me, he took off his shoes, threw them at me and spit on me (a sign of ultimate disgrace). Then one of my cousins and one of my brothers lifted me up by the shoulders, ears, and hair and started beating me. Soon more joined them in beating and spitting on me. They threw me bleeding out into the street. I heard my dad say, “I don’t want to see you again until you change your mind and forget this craziness!” Then I lost consciousness.
God’s Detour
When I came to it was dark and cold. The Lord impressed me to go to an Adventist family that had taken an interest in me. They took me in and cared for me. They encouraged me emotionally and spiritually. One of the promises we read was, “If God is for us, who can be against us? . . . We are more than conquerors through him who loved us” (Rom. 8:31-37). 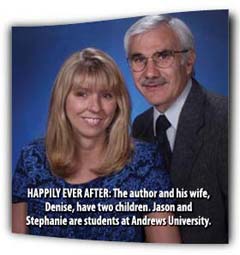 My friends suggested I study at Middle East College in Beirut, Lebanon. But at the time Middle East College was not accredited. Any college I went to had to be recognized by Iraq in order to get an exit visa. To top it all, I got a notice that I had to serve in the army because of the two years I lost in college.
When my father found out about this, he sent me a message: “Just forget the whole mess and come home to study.” I was tempted.
The war between the Arab countries and Israel had started. My neighbor was drafted in the first wave of conscripts. I was going to go in the second wave when news came that he had been killed. My neighbor’s death affected my mother deeply. She wanted me to come home, and she said to my father, “I don’t care if he is an Adventist; at least he is alive. I want him home.” Eventually I returned home.
About 10:30 on my first night home, I was in bed when my cousin and my brother came and said, “We need to go for a walk.”
I thought they were going to take me out and kill me, so I refused. But they forced me to go with them. We walked a few miles to a park, arriving about midnight. I closed my eyes, anticipating the worst.
“Look, we saw what happened to you,” my cousin said. “We saw how everyone spit on you and beat you. You are either crazy or you have something we want, too.”
This gave me the opportunity to study the Bible with them. My brother joined the church. My cousin became pastor of the Adventist church in Baghdad. As a result of their ministry, many members of my family joined the church.
Interestingly, my neighbor for whom they had the memorial service was later discovered to be alive; it was a case of mistaken identity. The Lord used that bad news to bring good news to me.
Following God’s Lead
Eventually Middle East College was accredited and recognized by Iraq, and that gave me the opportunity to study there. Those two years I lost at the university later proved to be a blessing. If I had taken the exams on Sabbath and passed, the government would not have allowed me to study outside the country. It also took care of the army problem; since I was studying, I didn’t have to go into the army.

Shortly after arriving at Middle East College, the Lebanese civil war started. I was forced to look for an education elsewhere.

Someone suggested, “Since you want to study engineering, why not go to Walla Walla College?” When I spoke to someone about studying at Walla Walla, he said it was easier for Moses to take the children of Israel out of Egypt than it would be for me to study in the United States. “You don’t know the language,” he said. “You don’t have money. Neither Iraq or the United States will grant you a visa.”
The Adventist family I stayed with when I was kicked out of my home said, “Let’s pray.” I found a sponsor in the United States. Saddam Hussein, then prime minister of Iraq, signed my passport.
I came to this country unable to speak English, with a half dollar in my pocket. I spent four years with language problems and financial difficulties. But I finished my education with two degrees, theology and engineering.
During my college years I felt God’s call to ministry. After graduating I served one of the Adventist churches in Spokane, Washington. Then I went to the seminary in 1996 and graduated with a doctoral degree. I went to visit with some cousins who live outside Detroit, Michigan. One of them had just come back from visiting my family. He reported that my mother was studying the Bible with the Adventist pastor and was going to the Adventist church.
My mother told my cousin, “The Lord guided my son to do what he did. He is alive today because of it.”
I have followed Jesus for many years. The more I know Him, the more my appreciation and love for Him increases.
______________________________
S. Joseph Kidder is an associate professor of Christian ministry at the Seventh-day Adventist Theological Seminary in Berrien Springs, Michigan.
Advertisement
Advertisement