The Coming of Starbucks Nation

The Coming of Starbucks Nation

hose who comment on American sport sometimes use an expression to describe the significance of mental concentration: “Keeping your head in the game.” When athletes allow their minds to wander during a sporting event, they lose their edge.

In many ways we do this every day. We go about the mundane things in our lives without giving them a second thought, without asking ourselves why we conduct ourselves in certain ways.

For example, do you ever ask yourself why you’re willing to stand in line (or sit in the drive-through) for 20 minutes—in a fast-food place? Probably only when you’re actually waiting. Otherwise, if you’re like most of the rest of us, you’ll be back in line a day or two later without giving it any further consideration.

It would probably take a government grant to nail down all the specifics, but if someone were to undertake an academic study of the genesis of fast foods—and fast-food mentality—there’s no mistaking that the role of the McDonald’s burger chain would occupy a central part of the research. Even though the overlarge, garish golden arches no longer comprise a part of the architecture of McDonald’s restaurants, they’ve become an iconic symbol that has transcended cultures around the world. 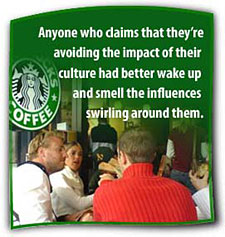 Since the opening of the first McDonald’s in Des Plaines, Illinois, in 1955 (first day’s revenues: US$366.12), the ubiquitous chain has sought to win the minds and hearts of, well, just about the entire race.

So in just a generation or two, our eating behaviors have been altered drastically. Among other things, it has been argued—seriously—that it’s less expensive to eat out than to prepare food to eat at home. A few short decades ago, if someone were to suggest a stop to eat at a fast-food place after work, someone else would inevitably have asked, “Why? We have good food at home?”

And there’s also our behavior pertaining to time spent in eating. It has been observed that the furnishings of the  first fast-food stores were intentionally designed to be uncomfortable so customers would eat and leave. There was no interest in having diners hanging around. A leisurely meal? Where’s the profit in that?

Interestingly, however, the thinking (i.e., marketing) has done a 180 with regards to eating and leisure. Enter Starbucks. In these locations customers are actually encouraged, sometimes with stuffed chairs and tables and magazines and wireless Internet service, to settle down and enjoy the atmosphere—as well, of course, as the overpriced coffee.

The difference seems to be that McDonald’s (and the other species of their genus) are selling food; whereas, Starbucks (and their imitators) are selling an experience. Starbucks, it has been said, “is not about satisfying physical needs, but emotional ones.”i

One curious result of this new direction is that fast-food places have had to begin to offer more expensive coffee. Rather suddenly the old maxim that you undercut your competition by offering a product at a fraction of the cost just doesn’t compute anymore. Economics 101 isn’t what it used to be.

And, as if it weren’t enough to sell 4 million cups of coffee daily in the United States alone, Starbucks appears now to have set out toward a far more grandiose goal: intentionally rewriting culture itself. To some degree, it’s clear that McDonald’s and other fast-food companies have affected culture, but that wasn’t their intended goal. They were just interested in selling a lot of food in the shortest possible amount of time.

But Starbucks is seeking to influence the films we see, the CD’s we listen to, and the books we read. As one commentator put it, “Starbucks is probably the brand that has had the biggest impact on society in recent years.”ii So here’s the thinking: If you like our taste in coffee, you’ll like our taste in pop culture.

It began with Starbucks partnering in the backing of the Ray Charles Genius Loves Company CD in 2004, which garnered eight Grammy Awards. Now they’re talking performances with the likes of Mick Jagger, Bono, Prince, and Chris Martin about possible tie-ins.

The first partnership in a film came with Akeelah and the Bee, thus far a modest beginning. And the company is beginning to sell books as well as to look for the right titles to publish.

“It amazes all of us—how we’ve become part of popular culture,” Starbucks Chairman Howard Schultz told  USA Today. “Our customers have given us permission to extend the experience.”iii And culture watchers—both advocates and detractors—have begun to characterize their faithful customers as “Starbucks Nation.”

Still, the ultimate aim from Starbucks’ viewpoint is a bottom line. No matter what their intentions are, they won’t undertake any initiative unless it’s projected to make a profit. But if a profit can be made by impacting and changing the way we think and behave, they are full speed ahead. This is where this kind of amoral thinking becomes worrisome. In effect, we are being subjected—whether we choose to be or not—to forces outside ourselves that we may not even be aware of.

Anyone who claims that they’re avoiding the impact of their culture had better wake up and smell the influences swirling around them.

This is an issue that is far from alien to Scripture. Lot lost the majority of his family in a narrow escape from a culture of astonishing atrocity (Genesis 19). Joshua drew his line in the sand and demanded: “ ‘Choose for yourselves this day whom you will serve’ ” (Josh. 24:15, NKJV). In Solomon’s infamous marital experiment—for all his vaunted wisdom—he took intercultural exchange to disastrous new frontiers (1 Kings 11:4). Hezekiah got swept up in materialism (2 Kings 20:12-19).

And the apostle Paul warned us not to “conform any longer to the pattern of this world, but [to] be transformed by the renewing of [our minds]” (Rom. 12:2, NIV). If this was a concern deserving of inspired comment in biblical times, it certainly is just as relevant for us today.

Quick review of basic grammar: “renewing” is an ongoing process. It is not a once-and-final thing. In whatever “nations” we may claim citizenship, let’s by all means continue the renewing of our minds by keeping our heads in the game.