The Diocese of Virginia has lost 12 congregations and about 18 percent of its average Sunday worship attendance in recent battles over homosexuality and the authority of Scripture, according to figures provided by the diocese.

The size of the breakaway parishes, their historical importance and their success at "planting" new congregations all make tremors of Sunday's split shiver through the Episcopal Church, said the Rev. Kendall Harmon.

"This is terribly significant," said Harmon, an influential conservative theologian from South Carolina. "When you lose large churches, you don't just lose an individual parish, you lose a great big part of the family."

The fight in Virginia will be closely watched by both sides—by conservatives, to see how hard it is to cut ties with the national church; and by church lawyers, who will fight aggressively to maintain control of property. Eight Virginia congregations announced their decision to leave Sunday. Three more are considering similar action. A looming legal scrap will determine if the diocese loses more than $27 million in property as well.

A "saddened" Virginia Bishop Peter Lee promised a fight. "As stewards of this historic trust, we fully intend to assert the Church's canonical and legal rights over these properties," he said in a statement.

The Virginia congregations have thrust themselves to the front line of a conservative movement, in which U.S. parishes are aligning with theological allies in the wider Anglican Communion.

While conservatives make up a minority of the 2.2 million-member Episcopal Church, a majority of the world's 37 other Anglican provinces agree with their belief that the Bible trumps cultural accommodations on issues like homosexuality. Tensions in the U.S. church, mounting since the decision to ordain women three decades ago, exploded after an openly gay man was elected bishop of New Hampshire in 2003.

Since Presiding Bishop Katharine Jefferts Schori, who supports the consecration of gay bishops and the blessing of same-sex unions, was elected in June, seven dioceses have rejected her authority. One diocese--San Joaquin, California--has taken preliminary steps to leave the Episcopal Church.

Now, however, they are both members of the Convocation of Anglicans in North America, a branch of the Anglican Church of Nigeria. That church is headed by Archbishop Peter Akinola, an outspoken and powerful conservative who has publicly supported Nigeria's strict anti-gay laws.

The U.S. convocation will be headed by the Rt. Rev. Martyn Minns, rector of Truro Church, whom Akinola has appointed a "missionary bishop."

"(The Episcopal Church) has been our spiritual home and separating from it is very hard," Minns said in a statement. "But there is also the promise of a new day. A burden is being lifted. There are new possibilities breaking through."

Progressive religious groups, concerned by the violence and theology in the "Left Behind" Christian video games, have asked Wal-Mart not to sell them.

The "Left Behind: Eternal Forces" game is a spinoff from the best-selling "Left Behind" apocalyptic series and carries a rating of T for "teen" because of its violent elements.

"What is at issue here is this is an instructional video teaching young Christian children about an ideology of religious violence," said author Fred Clarkson, a member of the advisory board of the Campaign to Defend the Constitution, a liberal group that opposes the religious right, in a teleconference call with reporters Tuesday (Dec. 12).

Wal-Mart is continuing its plans to stock the game, and the company producing it said critics are mischaracterizing it. "The game is about good vs. evil, not Christian versus non-Christian," said Jeffrey Frichner, president of Left Behind Games. "When people understand that, they love what we're doing because who doesn't want to fight against evil?"

Clark Stevens, co-director of the Campaign to Defend the Constitution, said the protest is focusing on "the hypocrisy that exists within the religious right" because some affiliated with it, including Focus on the Family, have supported the game even though they generally speak against violent video games. The protest does not seek the removal of any other violent games.

A Wal-Mart spokeswoman said the product has been selling in select stores and online. "As always, the decision on what merchandise we offer in our stores is based on what we think our customers want the opportunity to buy," said Tara Raddohl of Wal-Mart.

Archeologists with the Vatican say they have unearthed a sarcophagus that may contain the remains of the Apostle Paul.

The eight-foot coffin was found buried unde
r the main alter of St. Paul Outside the Walls basilica in Rome and dates to at least A.D. 390. It has not yet been opened, and may not be for some time. Tradition had long held that the coffin was somewhere on the site.

News of the sarcophagus' discovery was announced in 2005, although archeologists had to do considerable work to unearth it. Vatican officials held a press conference Dec. 11 to announce its excavation.

"For now we didn't open the sarcophagus to study the contents. Our aim was to unearth the coffin venerated as St. Paul's tomb, not to authenticate the remains," Giorgio Filippi, the archaeologist of the Vatican Museum, said, according to National Geographic News. "The sarcophagus was buried beneath the main altar, under a marble tombstone bearing the Latin words "Paulo Apostolo Mart.," which means "Apostle Paul, Martyr."

Standing next to plastic figures of Mary, baby Jesus and Joseph, two ministers and three members of Congress took turns at a microphone earlier this month to announce a new initiative called "Project Nativity."

"Our hope and prayer is that over the next three to four years, hundreds of nativity scenes will begin to dot the landscape of America once again," said the Rev. Patrick Mahoney, director of the Christian Defense Coalition. He said he hoped the temporary nativity scene on a terrace of the U.S. Capitol would serve as a "template" for similar efforts.

His project, which encourages Christians to seek permits for nativity scenes in front of public buildings, is just one example of multiple efforts to "take Christmas back." In recent years, there have been rumors of a "War on Christmas" and actual skirmishes over the use of the word in the public square and at the retail counter.

Now, some clergy and devout lay people are shunning secularism and church-state concerns and taking a more proactive stand to remind people of the Christ in Christmas or, as they like to say, "the reason for the season."  The initiatives stretch across the Atlantic to northern Ireland, where Catholic schoolteacher Kathleen Darragh wrote her own version of "12 Days of Christmas" that is being distributed by Illinois-base ACTA Publications.

Writing with her schoolchildren in mind, her poem begins: "On the first day of Christmas, our true God sent to us ... Our Saviour Baby Jesus."

"The most excited talk they have is about Santa and I sort of thought we have to get this idea across to them that Christmas is really about Christ and keeping the Christ in Christmas," she said in a phone interview.

"People here and people in England are saying, `Let's not go down the American route of having a Happy Holiday. Let's say ... this is Happy Christmas. It's not Happy Holiday."

This year, some Christians are celebrating the focus on Jesus' birth on the big screen with the recent premiere of "The Nativity Story" movie, just one way they hope to redirect Christmas away from the North Pole and back to Bethlehem.

"What I sense is it's raising the level of discussion about Christmas back to where it should be, instead of where it has been over the last two or three years, over whether we can say the word `Christmas' in our greetings," said David Jeremiah, a pastor in El Cajon, California, who has written a companion book to the film. "Why would we want to deal with Christmas in a lesser way than the reality of the story itself?"

In a move to further the movie's message, the same ministers that were encouraging permits for nativity scenes also supported plans to give each member of Congress a pair of free tickets to the film.

Magazine Article
​You Will Find a Baby
The pandemic has forced us to adapt our holiday traditions. 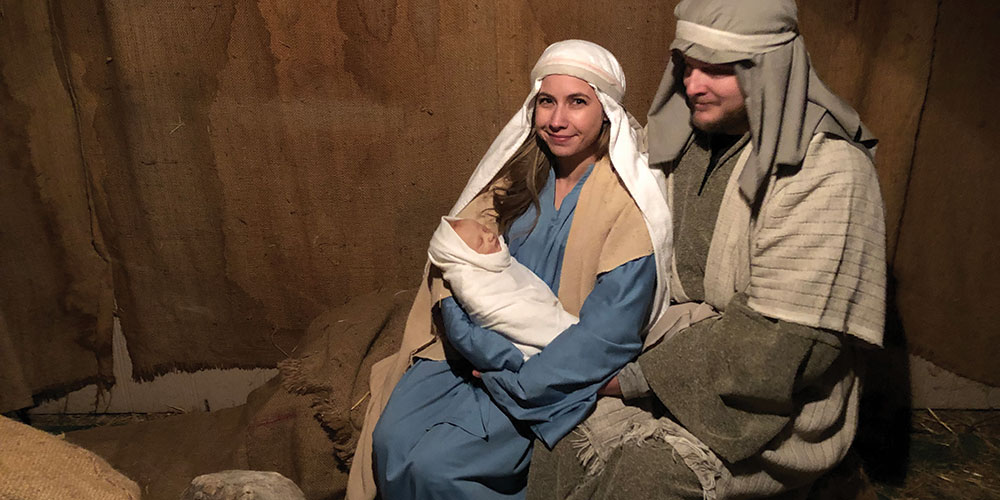