Is There a Church in the House

hile some churches are building bigger facilities for their congregation, there’s a movement with the opposite goal—to make church a small, intimate event that can be found in any home.

Known as house churches, simple churches or missional churches, these relationally based church gatherings are  growing quickly in popularity, with as many as 4,000 house churches in the United States alone. Although a relatively new phenomenon in Western cultures, those involved take their lead from the early church examples of community found in the New Testament. In fact, many leaders of this movement have been in church leadership for years. After a reexamination of Scripture, they say that they’ve found today’s Church to be very different from the original design of the early Church.

“Generally speaking, what today’s Church is doing isn’t working,” claims John White, a house church coach in Denver. "According to recent Barna statistics, during the last 50 years there has been more Christian activity than any time in history,  and yet the church’s impact on the culture and quality of discipleship in the churches has continually declined. There are certainly exceptions, but overall, the system is broken.” 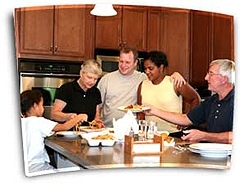 So why is the house church model a potentially better solution for impacting the culture? For Brad Cecil, a pastor of Axxess,  network of house churches in Fort Worth, Texas, that question can be answered in one word: transformation.

“Transformation is a slow, steady process that occurs as we share life with people, and a house church environment is much more conducive to this phenomenon,” said Cecil. “Many churches celebrate the idea that people show up and consume their sermons, songs and ministries. But consumption is not transformative! I don’t think much transformation is occurring in many churches today—just a lot of activity.”

David Hopkins also pastors one of the house churches from Axxess. He’s convinced that the house church model works because “It’s a more natural expression of real world community.” White noted that rising property costs amidst a struggling economy have also encouraged pastors to consider alternative church models. “Many are burned out from the administrative struggles of a traditional church,” he said.

A unique meeting place, however, isn’t all that differentiates these churches. It’s clear that a house church gathering is structured very differently than a typical Sunday morning service. While a diverse spectrum of styles exist in each setting, most have a free-form, unstructured approach and included the element of food. “It looks like a dinner party,” said Cecil.

"It’s a lot like a neighborhood barbecue,” agreed Jonathan Dale of House2House, a house church publication. “It’s about food, fun, singing, food, interactive Bible study, praying with each other … and did I mention food?”

“We stress listening to the Lord and letting Him bring the agenda,” said White.

Although appealing to many because of this back-to-basics approach, house churches share their own host of problems. "House churches can be messy,” White admits. They’re more vulnerable (easy to start, easy to die), and people miss the ‘bigness’ of traditional church.” From Cecil’s perspective, it seems that people’s “expectations of church as a vendor are still strong,” and this can make a member’s transition to a house church difficult. White notes that "house churches can be ingrown like any other church,” but he sees unique outreach possibilities in this model. “House churches have the potential of everyone owning outreach—of everyone reaching out and folding in new people through relationships. It’s hard to get lost in a house church.” 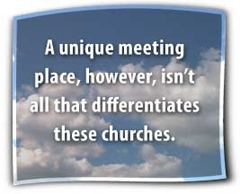 This relational element seems to make house churches appealing to a wide variety of people. “I think it reaches everyone because people want to share life,” said Cecil. “The old understanding that the ‘spiritual seeker’ desires anonymity is false. They only desired it because they were tired of the ‘conversion’ sales push—just like we avoid the car salesman at the car lot. Today, a profound spiritual revival is occurring in culture, and it is mostly in the arenas outside of the institution of the church. I don’t think people think, ‘If I want to find God … I must go to a church.’ They see that everyone is on a spiritual journey and they want to dialogue about it, not just listen to one person preach.”

House churches seem to also go hand-in-hand with church planting, a proven effective evangelistic model. “The numbers around the world are staggering!” said Dale. “By far the most effective way of reaching the lost is the planting of new churches. And by far the easiest way to multiply churches is with a ‘simple church’ model.”

“It’s difficult to ‘plant’ a normal church in today’s culture. You have to ‘ramp-up’ so fast to make it financially viable that it is silly,” Cecil said, alluding to the benefit of the low overhead in house churches.

While this may be true, American culture still connects the word “church” to a particular type of building. For that reason, it seems that some Christians would be apprehensive inviting people to church in their family room. Dale disagrees, however. “Have you asked someone to go to church lately? How about inviting them over to your house for a party?” he said. To David Hopkins, it’s church made simple. “We don’t have fancy evangelism, cool T-shirts or outdoor signs with witty sayings about church,” he said, “just God’s Word and transformational fellowship.” But he added, “I’d at least like a bumper sticker though.”

This article first appeared in the January/February, 2003, issue of Outreach Magazine.  Used with permission. All rights reserved.