“So then, a Sabbath rest still remains for the people of God; for those who enter God’s rest also cease from their labors as God did from his. Let us therefore make every effort to enter that rest, so that no one may fall through such disobedience as theirs” (Heb. 4:9-11, NRSV).*

ver the past few years some folks have questioned the seventh-day Sabbath. Their argument (as I understand it) goes like this: our true rest is found in Jesus Christ and in His completed work of salvation for us. Because our rest has been fulfilled in Christ, the seventh-day Sabbath, a symbol from the old covenant, has been superseded and, thus, abolished. It is now a legalistic work that robs us of the rest Christ offers us in the new covenant doctrine of grace.
Besides the obvious questions that this move, by default, raises—such as the seventh-day rest existing prior to the old covenant (Gen. 2:1-3), and the need to chisel out the fourth commandment from the Decalogue (while leaving the other nine firmly in stone)—there’s another one. How is it that the one commandment devoted to rest, the one commandment that specifically expresses rest, the one commandment that gives us a special opportunity
to rest, has been turned into the universal “new covenant” symbol of works? The only commandment that, by its nature, is all about rest has become the iconic metaphor for salvation by works? 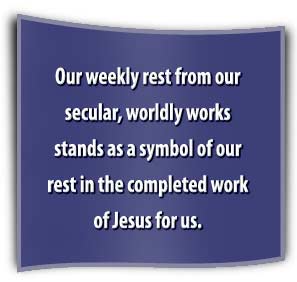 What’s wrong with this picture?

Far from being a symbol of works, the Sabbath is the Bible’s archetypical symbol of the rest that God’s people have always had in Him. From the pre-Fall world of Adam and Eve’s Eden, to the new covenant rest that God’s followers have in Christ’s work of redemption for them (“So then, a Sabbath rest still remains for the people of God” [Heb. 4:9]), the Sabbath is a real-time manifestation of the rest that Christ offers to all (Matt. 11:28).

Anyone can say they are resting in Christ; anyone can say they are saved by grace. But the keeping of the seventh-day Sabbath is a visible expression of that rest, a living parable of what it means to be covered by His grace. Our weekly rest from our secular, worldly works stands as a symbol of our rest in the completed work of Jesus for us. “For those who enter God’s rest also cease from their labors as God did from his.” Our obedience to this commandment is a way of saying: “Hey, we’re so sure of our salvation in Jesus, we’re so firm and secure in what Christ has done for us, we can—in a special way—rest from any of our works because we know what Christ has accomplished for humanity through His death and resurrection.”
It would seem that by firmly adhering to the commandments against adultery, or against stealing, or covetousness, or idolatry, we could be accused, at least a little more logically and reasonably, of legalism, of salvation by works (that is, if one could be accused of legalism for obeying any of the commandments). But we are legalists because we rest (rest!) on the seventh-day Sabbath?
The irony of it all: by resting we are accused of trying to work our way to heaven—an argument that makes about as much sense as a parricide pleading for mercy because he’s an orphan.
Somehow, Seventh-day Adventists have lost control of the dialogue and have found ourselves defending this weekly rest we have in Christ from the opprobrium of being antithetical to grace, of being an attempt at salvation by works. Yet by resting from our works according to the commandment we reveal just how real that grace is in our lives. We just don’t say we have that rest; we live it. The burden of proof, then, should be on those who—though claiming to rest in Christ’s grace—are missing out on the New Testament’s most obvious and practical expression of that grace, the seventh-day Sabbath.
__________
*Bible texts credited to NRSV are from the New Revised Standard Version of the Bible, copyright © 1989 by the Division of Christian Education of the National Council of the Churches of Christ in the U.S.A. Used by permission.
____________________________
Clifford Goldstein is editor of the Adult Sabbath School Bible Study Guide.
Advertisement
Advertisement