THANKSGIVING DAY AWAY FROM FAMILY and close friends in America? We would miss all the laughter, joy, and good food that always came with our family Thanksgiving celebrations. Add to that the time off from school and work, a vacation apart from routine things. Still, our family was about to experience its third Thanksgiving away from home. But the Lord of harvest had plans of His own to make this holiday special.
Our Home Away From Home
We were living in Jakarta, Indonesia, a tropical paradise with its tall coconut trees and beautiful plants and flowers. Living near the equator, sunrise and sunset were at nearly the same time each day of the year. Every morning we were awakened by the Muslim call to prayer. We lived on the mission compound in the suburbs of Jakarta, a district called Kebayoran Lama. In 1970 our family of six had to experience a holiday without my wife, Esther, who had gone to Singapore for surgery. This meant that I was in charge of our four children, Teddy, Randy, Jeffrey, and Janelle. It was a struggle, putting in part-time at the union mission office, then coming home to manage the children. Our hired help was of great assistance by doing the cooking, cleaning, and laundry.
Shortly after arriving in Indonesia, I made friends with some of the employees at the United States embassy. I checked out films from the United States Information Service office on the embassy compound to show our children and neighbors. A number of United States marines were stationed there, and I had great conversations with them. They were there on special assignment, away from their families.
With Thanksgiving week upon us I contemplated what we would do to celebrate. Many thoughts ran through my mind. I knew that our cook, Annie, would do a great job with the meal, but what about the rest of the day? The Pan American Airlines office always had the film of the National Football League game of the week that could be checked out for a few days. That was the ticket: After worship and breakfast, cleanup time, play time, then dinner, followed by some trumpet playing, then the football movie. We had a 16-millimeter projector (this was way before videotapes and DVDs), so all we needed was the reel-to-reel film from Pan Am.
Details, Details, Details
The Sunday before Thanksgiving, the quiet of our compound was disrupted by the sound of a jeep. We heard it come and stop in our driveway. Before we could determine who had come to visit us, a big muscular man was knocking at our door. It was Willie, one of a quartet of marine guards stationed at the United States embassy. He had a big box in his arms, and after greeting the children he marched through the living room, past the dining area, and into the kitchen. No need to say, “Make yourself at home, Sergeant Willie”—he had already done that! 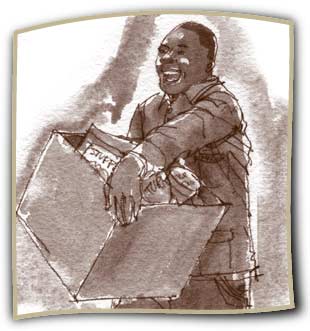 He quickly left me instructions: “Pastor Jones, you and the kids have a real nice Thanksgiving dinner, OK?” Then out the door he went. I immediately investigated the contents of the box he had left for us.
A hard, cold object sat prominently in the middle of the box, a frozen turkey. The delivery also included cranberry sauce, stuffing, and a half-gallon container of Magnolia ice cream—Singapore’s best brand.
Now we had a problem: We had space in our little refrigerator for the ice cream, but that turkey was far too big to fit into our freezer. And anyhow, we were vegetarians. Out the door and down the sidewalk I went. I knocked at the door of Larry and Carol Colburn, newly arrived missionaries from the Chinese-speaking area of the Far Eastern Division. They had a large freezer, and without hesitating they agreed to keep the turkey frozen until I could find some way of getting it baked.
I contacted the marines and invited them to join us for Thanksgiving dinner. They were excited about the invitation, and we looked forward to their arrival. They told me they intended to bring another man, a marine colonel.
The next day I walked from our union mission office on Thamrin Street to the Hotel Indonesia, the building where the Pan Am office was located. When I asked to see the manager, his assistant told me he had just gone out to take a stroll. Back out on the street I had no trouble spotting him. Tim was easily identifiable—tall, blond, and handsome; he was a former all-American football player from Georgia Tech.
He was walking along looking depressed and downhearted. I greeted him and asked, “What’s the matter, Tim? You look down.” 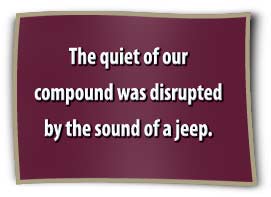 “Pastor Jones,”   he said, “this is      our first  Thanksgiving away from home, and my wife and I are in the dumps. We went shopping for a turkey for Thanksgiving, and all we could find was a lot of skinny     chickens. No turkeys      anywhere.”
No turkey? First Thanksgiving away from home? I made a deal with Tim on the spot. If he would ask his wife to prepare the turkey, they could take part of it for themselves and let the five marines from the U.S. embassy eat the rest of it.
“Yes!” he responded quickly, as if to seal the deal before I could change my mind. “She’ll be glad to do that.” Later that day Tim was at my home to get the big frozen turkey. A day later he returned the “marine” portion of the cooked bird with many words of appreciation.
A Day to Remember
When Thanksgiving Day came, we five Joneses were ready. We had the National Football League game of the week to watch after the dinner. We had the “marine” part of the turkey on a platter with all the trimmings, artistically arranged by Mrs. Hapsgood. Our vegetarian chicken-style soymeat was ready, our vegetables were cooked, we had rolls, pumpkin pie, and all the other goodies connected with Thanksgiving. And the ice cream from Singapore would be delicious with the pie!

At the appointed time we heard the jeep from the embassy honking for admittance at the gate of the compound. The gatekeeper opened the gate widely for them to enter. Four hungry marine sergeants and their colonel, all wearing civilian clothes, got out of the jeep and eagerly entered our house where the aroma of food filled the air. After a brief few minutes of spiritual food, I offered prayer, and the eating began. The only one missing was my wife, still in Youngberg Hospital, recovering from surgery.

As the meal began, I noticed that the colonel was having difficulty carving the turkey. Finally he said apologetically, “Pastor, this case knife just isn’t sharp enough to do the job. Do you have a real knife I can use? These men are getting impatient.” Everyone laughed, and I quickly went to the kitchen and got one of our biggest knives for him to slice the turkey. The sergeants were delighted.
What a dinner that was and how unusual—four sergeants, a colonel, four children, and an Adventist pastor! When the meal was finished, the men wanted to go outside and shoot basketball on our little court. Those marines, well-built, muscles bulging, and graceful in their walking, looked like contestants in a Mr. Universe contest. My children enjoyed watching them shoot baskets and laugh at one another. It was truly a fun time!
Returning to the house, we served the pie and ice cream, watched the football game, and finally said “goodbye.” The food was abundant and delicious, the fellowship was superb, the recreation was relaxing, and we were all happy for the providential events that brought it about.
We had a prayer of thanksgiving as the men departed, thanking God for the people He had brought into our lives, and how they all had contributed to an unforgettable Thanksgiving.
__________________
After a career serving the church as a pastor, missionary, and administrator, Theodore T. Jones II is retired, living in Topeka, Kansas.
Advertisement
Advertisement