Our Path of Self-discovery

RE WE STUPID?” MY BOYFRIEND, ERIC, asked uncomfortably.
Although I didn’t know how to answer that question, I could have answered a few others. I knew we were in the Great Smoky Mountains National Park at good old Mount LeConte. I knew we were there to avenge our defeat from two summers before when promises to be home by 7:00 had forced us to turn back before reaching the top. But as to whether what we were doing was a good idea, that I couldn’t answer.
I had thought so that morning. But that was before misleading directions tagged extra hours onto our journey, jeopardizing our chances of being able to get back down the mountain by sunset.
A Good Day for a Hike
This March morning had seemed unseasonably warm from where we started. Here, not so much. Even as we scraped ourselves out of the car, an arctic blast threatened to turn our ears into ice sculptures. We barricaded them behind fuzzy blue beanies as Eric scanned the surrounding peaks to see if they also donned snow caps. They didn’t look white.
One hearty hiker huffed past us, his sturdy hiking boots and trekking poles leaving impressive tracks in the gravel. We shivered, nervously scanning our own plain apparel, light layers that could have time-warped out of our unfinished summer stroll when our greatest worry had been overheating. But humor snuffed out our concerns as we watched the hiker wearing a bulky ski jacket power-walk comically around the first corner. “Ski poles?” I scoffed as we burst out laughing. Walking sticks had always struck me as excessive. Today we found someone who achieved a new extreme. But instead of making fun, we should’ve been taking notes. 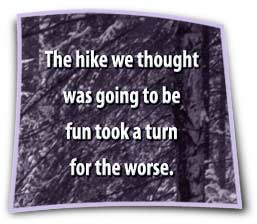 The mouth of the trail loosened the ties of our reservations. Waves of sunlight dripped from branches like languid drops of honey, plopping down occasionally to flicker in the streams or to caress the knotted backs of boulders. A balmy breeze tousled our hair as we noted intermittent clumps of snow dotting the edges of the trail, frosty monuments to the winter gone by.
But this complacency was short-lived. Sudden turns in the path revealed pockets of resistance to the coming spring. Our sun-kissed footpath was prone to mood swings. Sometimes precariously dangling icicles hurled themselves down at the trail, spearing unmarked bulls-eyes.
But the mountain’s most elaborate scare tactics were shimmering sheets of ice. I soon swapped uniform steps for erratic convulsions as our steady stroll became an unwelcome dance. I was aided along some sections by cables tethered to the mountainside that allowed me to tow myself up the slick slopes. Although gripping the cables without gloves made my fingers feel like icy appendages, I did not trust my balance for a second.
Here and there we passed people on their way down—warm, happy souls, most of whom had trekking poles. “How much longer?” I eagerly inquired of each one, fishing for encouragement. Tagged on to each pessimistic estimate were similarly somber warnings.
“Be careful,” a rosy-cheeked lad warned, as he used his poles to maneuver by us carefully.
“There’s ice up ahead, some real tricky places,” an older woman commented as she picked her way by us using silver sticks.
The most discouraging warning came from a good-natured middle-aged couple. “You should probably turn around,” they cautioned. “The trail just keeps getting worse. If you keep going, you won’t make it back down before dark.”
Ever Upward
I peered over at Eric, trying to gage his concern. His face was a stoplight stuck on green. As we bid farewell to the friendly couple, I willed my tractionless sneakers to become snowshoes, wished we had prepared a little more carefully, and scudded along wearily.
I didn’t know how it could get any worse, but it did. Instead of sporadic icy patches, vast portions of the trail now glinted in flickering rays of light. Here even the most innocent-looking strips were sinister on some level. Although these mounds looked powdery, they were actually packed down, frozen over, and just as slick as the rest. We finally deduced why we hadn’t spotted this snowy sheet from the bottom: it wasn’t cloaking the entire top of the mountain—just the trails.
By the time we reached the sign that announced, “LeConte Lodge—.1 mile,” going one tenth of a mile farther seemed as feasible as drinking one tenth of the ocean. But we plodded carefully forward until we caught sight of a small building through the trees.
“There, we made it. Let’s go,” I proclaimed, my voice studded by relief.
“I think it’s just an outhouse,” Eric protested.

I groaned. We slogged along a little bit farther and squinted at some larger buildings. By now my nose was a bubbling brook, my hands were tingling, and the sun was sinking. The thought that we wouldn’t make our descent by sunset had whittled away at nature’s beauty until all I saw was one great impediment. My heart started pounding loudly, and I began to sweat in spite of the cold. “Let’s go,” I repeated, my voice barbed with hysteria. We turned around.

If We Only Knew
At the mountain’s base, ski poles had been a joke. As we ascended, they’d become a whim, like a midafternoon chocolate craving. Now as we descended, they became a violent urge. Sheets of ice took the trail hostage. Clutching the tethered cable as if it were the last cupcake in a room full of snack-happy kindergartners, I slowly lowered myself down the trail.
Always to my right was the mountain’s edge, which looked suspiciously like a slide, with occasional trees ready to smack me on the way down. I was tired, cold, and terrified. I envied the sun, who having put in his time, was snuggling under cloudy sheets for a long night’s rest. At least he was always warm.
“Eric, I’m going to fall,” I murmured dejectedly as hot tears threatened to cascade down my cheeks. And I soon did. Eric carefully retraced his steps and helped me up. Unsure of what else to do, he rubbed my fingers while I regained my composure. Knees knotted from the fall, I took to hobbling. Step by slippery step we recognized familiar landmarks. Finally we spied our starting point, Eric’s lonely green car, parked patiently in the last receding rays of light.
Lessons Learned
Once in the Maxima, we cranked up the heat and switched on the headlights. I planted my hands on top of the ventilation vents and pondered our experience. Yes, we had conquered Mount LeConte, but if we had been properly equipped with jackets, gloves, boots, and trekking poles like the veteran hikers, it would have been a much more rewarding journey. As it was, we had muddled though, but just barely.
Life without Jesus is the same way—possible but not preferable. Because we have no foresight, we don’t know what we will need on our journeys, but “[our] Father knows what [we] need before [we] ask him” (Matt. 6:8). If we ask Him, He will prepare us for every obstacle. When we do what God asks us to do, we might, like Noah, get ridiculed at first. But eventually others’ laughter will turn into a longing for what we have, even if what we’re carrying looks suspiciously like ski poles.
____________________
Angela Ford is a passionate follower of Jesus Christ who lives in Chattanooga, Tennessee. She will graduate from Southern  Adventist University in December, and aspires to write magazine feature articles.
Advertisement
Advertisement