CENE 1: CHURCH MEMBERS ON A weekend retreat have been asked to introduce themselves by sketching a “coat of arms.” Each sketch is to deal with the question: “Where do I fit in the body of Christ?” One of the group shares his drawing, a page filled with a big “2.” When asked for an explanation, he replies, “Why, I’m a layman, of course!”
Scene 2: A young man comes into my office to talk about changing his prospective career from electrician to “pastor, missionary, or something.” “It’s time I begin to serve the Lord seriously,” he announces, revealing the frustration of a person who cannot connect his current vocational life with ministry.
Scene 3: A middle-aged dentist calls me to expound on his favorite thesis: “Sabbath school has nothing to do with being a dentist.” The class members are interested in his occupation, but they fail to provide any support for his efforts to apply his priesthood at the frontier of his medical profession. These three Christians, and many others like them, continue to demonstrate that the much-heralded “lay renaissance” of the 1950s presents the church 50 years later with a sharp challenge: moving concept to practice. There is no doubt that during the past decades some biblical concepts have been restored to the church’s thinking. It would be difficult to dispute the following arguments:
1. The biblical use of the word laos has nothing to do with amateur or lower class church member status, but instead it is the Bible’s favorite expression for all the people of God—including the clergy.1
2. All baptized Christians are ministers (2 Cor. 3:6). “Every true disciple is born into the kingdom of God as a missionary.”2
3. The direction of ministry is toward the world. And in this ministry all Christians are the key personnel. “Our Lord teaches that the true object of life is ministry.”3
The problem is that many church members still do not identify themselves as ministers, or know how to fulfill their ministry within the context of their daily lives. The pastor preaches that church members are ministers in their neighborhood, at work, among friends, and other places. How? Does he mean talking about Christ at every opportunity? Does he mean always being honest and ethical? The role of the pastor can be easily defined. He or she preaches, calls on the sick, teaches, baptizes, conducts the Lord’s Supper, and is involved in many activities relating to the parish and community. Some years ago Professor Samuel Blizzard4 made a survey of the Protestant ministers’ image of their roles. He wanted to learn how pastors ranked their tasks: first, in regard to significance in their scale of values, and then in regard to the amount of time they devoted to these ministerial tasks. Here is what he found:
Rank of “importance”             Rank in “time given”
1. preacher                               1. administrator
2. pastor                                    2. pastor
3. organizer                               3. preacher
4. administrator                        4. organizer
5. teacher                                  5. teacher
Note that teaching occupies the last place in both lists. Would such a hierarchy of ministerial preferences be compatible with the New Testament conception of the ministry?
James Smart in The Rebirth of Ministry makes it clear that where there is no teacher but only a preacher, one need not expect to find disciples. “A preaching and pastoral and priestly ministry” he writes, “may build large congregations and impressive organizations, but only when there is added to them an effective teaching ministry does the church begin to become a fellowship of disciples.”5
Another part of the problem is actually moving from the concept of “lay” ministry to its practice outside the congregation. How much attention is given to support systems for church members who apply their priesthood through the week? One writer suggests that sending a person into the structures of society as an individual Christian is like sending a soldier to meet the enemy alone.
A third problem lies in the organizational dynamics of congregational life. Church leaders easily get trapped into being controllers of ministry rather than supporters of ministry. Thus the concept of every member being a minister means a frantic effort by the leader to find something for everyone to do, resulting in a profusion of questionnaires, new jobs, surveys, and frustrations. The common concern of church council members—“If only we could get more members involved”—betrays the assumption that ministry is done only within the confines of the congregational program, or at least in some way determined by the church board.
The problem is not easily solved. The very nature of congregational life tends toward consolidation—members need each other, they enjoy working together, and common endeavors require their closeness to each other. As Paul reminds us, in this one “body” the interrelationships and mutual helpfulness are to be as cooperative and complementary as the various members and organs of the human body (1 Cor. 12:12). The very term congregation indicates those who have congregated. However, defending congregational life does not eliminate the need to look for ways to strengthen centrifugal forces.
Formidable Difficulties
How can the ministry of church members happen? Certainly not without the pastor. What is his or her major role? The pastor is supplied to equip all God’s people for their ministry in whatever station they are in life, and in all areas of life. And what is involved in the equipping task? 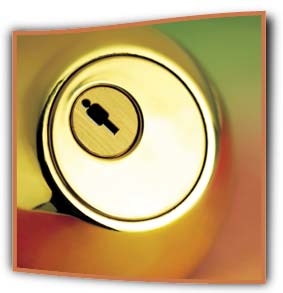 Four Greek words used in the New Testament inform our answer. The first is artios, a noun that means “complete” or “sound”—used only once in the New Testament, in 2 Timothy 3:17. The second is katartismos, a noun used once in Ephesians 4:12, in which it means “preparation.” This most closely resembles the dictionary meaning of “equipping”: “making ready or competent for service or action.”

That is the basic idea of “equipment” or “equipping” or “for the preparation of the saints,” as it is variously translated. The third is katartisis, a noun that means “being made complete.” It is used this way in 2 Corinthians 13:9: “Our prayer is for your perfection.”

Finally, there is katartizo, a verb used 13 times. It means “to put in order, to restore and to prepare.”6 But it is Ephesians 4:11, 12 that gives us the basic directive. Today’s English Version renders it well: “It was he [Christ] who ‘gave gifts to people’; he appointed some to be apostles, others to be prophets, others to be evangelists, others to be pastors and teachers. He did this to prepare all God’s people for the work of Christian service, in order to build up the body of Christ.”*

In plain English, this means the pastor’s role is not merely to keep people with Christ, but to develop them for Christ’s service in the church and in the world. A pastor is the head of a “seminary,” a training school for workers. The pastor is the dean, and the members are his colleagues in ministry.

Models of Ministry
R. Paul Stevens suggests that the New Testament offers three exciting models of equipping structures in the local church.
The first model is the “walking seminary.” He cites Paul using his missionary journeys as opportunities for mobile equipping. Surrounding himself with those who could later replace him, he begins with Barnabas, then Silas. Then Timothy in Lystra; Aquila and Priscilla in Corinth; Erastus in Ephesus; Sopater, Aristarchus, Secundus in northern Greece; and Gaius in Derbe.
The second model is the “open school in the marketplace.” Paul’s longest missionary stays, especially in the hall of Tyrannus, inaugurated the prototype of the second model, where for seven hours daily he equipped the local Christians for evangelism and lay training (Acts 19:9, 10).
The third model is the “advance-retreat pattern.” This model appears in Mark’s Gospel, in which Jesus led His disciples in active ministry, retreated with them for reflection, evaluation, and further instruction, and then led them out again.7 The question is: Would such equipping models take place without the initiative of the pastor?
Besides the pastor giving himself or herself primarily to equipping members, a creative starting point for the institution of the above models is the discovery that a church member already is a minister! The impression often given in sermons and church literature is that one could be a minister, or that one should be a minister, and the result is that members spend a great deal of time struggling to achieve ministry. They think if they hold a certain office or perform an eleemosynary service, they will be ministers. The usual result of such legalism is guilt and dissatisfaction.
In contrast, the biblical teaching is that Christians are ministers. Interestingly, even those of the Corinthian church, torn as it was by factions and including many who were immoral, proud, and hypocritical, were not told, “You could be a letter from Christ.” Paul writes, “You are a letter” (2 Cor. 3:3, RSV, italics supplied).†
Christians begin to get excited when they realize that the question is not “How can we be ministers?” but “How did our ministry go last week?”
Gifts and Giftedness
Ministry has often been constricted because needs were stressed and gifts were forgotten. A member becomes a Sabbath school teacher, for example, because the Sabbath school council has identified a need and no one else will do it. But only the balanced formula of need and resource (gifted person) spells ministry. If I see you drowning, would I jump in to save you if I could not swim? Many efforts at ministry are futile when giftedness and service do not match. 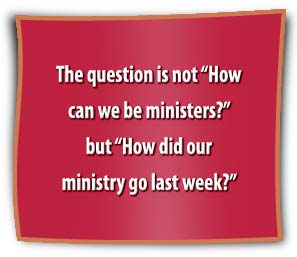