oses. The name has come to embody strength as he became “one of the most influential and powerful leaders who ever lived.”1 Moses took a group of rough slaves and turned them into a nation. He took Pharaoh’s brickmakers and helped them become a sophisticated and multifaceted community. He successfully led these sons and daughters of Abraham through some of the harshest country on earth to the borders of a land flowing with milk and honey—the Promised Land.
Moses. He should never have had a name. Born an alien in Egypt, he should have probably been a sacrifice to the river god at birth, but his mother hid him for three months. Unable to hide him any longer, she placed him in a papyrus basket among reeds along the river’s edge where Pharaoh’s daughter came to bathe.
Moses. It was a foreign name, not one his parents would have chosen. Yet every time he heard his name—meaning “to draw out” (Ex. 2:10)*—it was a reminder of the miracle that saved his life. The miracle of being taken from the river by Pharaoh’s daughter and adopted into the royal family.
Moses. Forty years later his name would barely be recognized among his own people, but that wasn’t important. He came to them in the name of another, the “I am,” the “Lord, the God of your ancestors—the God of Abraham, the God of Isaac, and the God of Jacob” (Ex. 3:14, 15).
Moses had become God’s messenger of hope.
Messenger of Hope 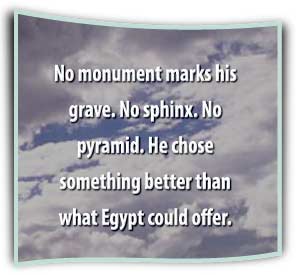 Forty years earlier Moses would have led his people out of Egypt willingly if only they had supported him. He’d shown his loyalty to them through the killing of an Egyptian (Ex. 2:12). He was ready, but they weren’t. “Moses assumed his brothers would realize that God had sent him to rescue them, but they didn’t” (Acts 7:25). Moses understood God’s will for his life, but he had yet to learn God’s way. God certainly wasn’t ready for him to lead—not yet.
Born a slave, raised a prince, Moses needs 40 years in the desert and a personal encounter with God before he’s ready to lead God’s people. This time, standing on holy ground, Moses is the reluctant one. His reasoning is remarkably modern, remarkably like excuses we would use.
Who am I to do what You have asked? Besides, who are You? Why should they believe me? I won’t know what to say (see Ex. 3:11, 13; 4:1, 10). And finally, “Lord, please! Send someone else” (Ex. 3:13).
His sense of inadequacy signals that he’s ready to be God’s leader because he knows he can’t do it in his own power. Remember, Moses was a carefully prepared prince of Egypt. Well educated in the arts, science, strategy, and diplomacy, he could attempt to pull together a ragtag Israelite army to challenge the power of Egypt.
God’s plan is different. Moses will lead, but God is in charge of strategy. First, though, Moses is God’s messenger—a messenger of warning to Pharaoh and the Egyptians, and a messenger of hope to the Israelites.
We modern messengers of hope do well to note how dependent Moses was on God. Listen to the promise of God: “I am the Lord, and I will free you from your slavery in Egypt. I will redeem you with mighty power and great acts of judgment. I will make you my own special people, and I will be your God. . . . I will bring you into the land I swore to give to Abraham, Isaac, and Jacob” (Ex. 6:6-8).
Redemption and a Promised Land! Nothing has changed. These are the promises of God, whispered in the garden after the Fall, stated matter-of-factly and linked to earthly geography in Exodus, drawn in blood at Calvary, and shouted to the world by the three angels of Revelation 14.
This is our message.
Israelite redemption is assured. The plagues demonstrate God’s power over the gods of Egypt and strengthen the faith of the Israelites. Come Passover eve and they’re ready, packed, waiting in “the glad hope of freedom”2 for the journey to the Promised Land to begin. Their firstborn sons are protected from death by the blood of the lamb on the doorposts of their homes.
The blood of the lamb gives life. In the blood of God’s Lamb we find our hope.
Journey of Hope
Free at last, the slaves of Israel march “like a victorious army” out of Egypt (Ex. 12:36). The journey of hope has begun; they’re marching to Zion, or at least in the general direction.
Protecting them from the possibility of a battle with the Philistines, God leads His people into the wilderness. The journey would have many detours and take much longer than they could ever have anticipated. But God is with them. They see Him in the pillar of cloud.

Yet they’re fearful when Pharaoh’s army corners them by the Red Sea. Doubt fills the camp as they lose sight of God in the presence of the enemy. They long for what they had, not what God has promised. Better to be a slave in Egypt than to face death in the wilderness is their cry (Ex. 14:11, 12). They lose hope.

Moses responds with a command of inaction: “Just stand where you are and watch the Lord rescue you” (verse 13). There is no hope anywhere else. I’m sure you’ve been there. I know I have. That’s when there’s nothing you can do but let God work His will.
During the miracle of the crossing of the Red Sea they are baptized (1 Cor. 10:2) and then released from the enemy. They know they now have nothing to fear from the power of Egypt. So they rejoice. They rejoice and celebrate their freedom found in God. Hope is celebrated.
At Mount Sinai a nation is formed, a priesthood is developed, and the covenant of love is instituted. Freshly saved, God leads them, through Moses, into ways of developing a wholistic relationship with Him and with one another. Moses pens the instructions so they will not be forgotten.
Now they’re ready for the Promised Land! Yet a spirit of fear delays their entry by 40 years. When they see the challenges of the journey, Egypt looks more attractive. We who’ve left the land of the enemy must realize that the way may not be easy, and that what we’ve left behind may at times appear attractive. Going back, though, takes us into slavery again. Ahead is the Promised Land, and God is with us.
Resting in Hope
Within sight of the Promised Land, Moses dies. Within sight of the Promised Land!
God buries him on the barren slopes of Mount Pisgah. No monument marks his grave. No sphinx. No pyramid. He chose something better than what Egypt could offer.
“[Moses] willingly traded the earthly monuments and acclaim, the perks, the power, and the pleasure for a reward in an invisible realm. He cashed it all in—every shekel of it—for a relationship with the living God. It was the best trade anyone could have made. What he lost, he couldn’t have kept anyway, and what he gained, he could never lose.”3
He dies, but he dies in hope, listed among those who “placed their hope in the resurrection to a better life” (Heb. 11:35). And, it seems, he tasted the reality of the resurrection before any other (Jude 9; Matt. 17:3).
We must recognize that we may not see the hope fulfilled in our lifetime. However, that possibility doesn’t diminish the hope we have, for the sleep of death is only a night while we wait for the resurrection dawn.
In his final address to the Israelites, Moses gives them a song—a song of promise for the future (Deut. 32). Then, in Revelation 15, there’s the Song of Moses and the Lamb—a song of worship and victory. We long to sing this song, for that’s when our hope is fulfilled. And it makes no difference whether we rest in the grave or remain alive at the second coming of Jesus.
Until then we remain God’s messengers of hope on a journey to the Promised Land.
___________
*All scriptural references are from the New Living Translation, copyright © 1996. Used by permission of Tyndale House Publishers, Inc., Wheaton, Illinois 60189. All rights reserved.
___________
1 Lorin Woolfe, The Bible on Leadership: From Moses to Matthew—Management Lessons for Contemporary Leaders (New York: Amacon, 2002), p. 71.
2 Ellen G. White, Patriarchs and Prophets, p. 279.
3 Charles R. Swindoll, Moses: A Man of Selfless Dedication (Nashville: Word Publishing, 1999), p. 366.
_______________________
Bruce Manners is pastor of the Avondale College church in Cooranbong, New South Wales, Australia.
Advertisement
Advertisement