he 157-year-old flagship paper of the Seventh-day Adventist Church has a new editor, continuing a tradition of what is believed to be the oldest American religious magazine still in continuous publication since its founding.
Bill Knott, a veteran pastor, author, and historian, and a nine-year associate editor of Adventist Review and Adventist World has been elected editor of both publications, effective January 1, 2007. He will succeed William G. Johnsson, who is concluding a 24-year term in the post.
“I am honored and humbled by the company [of Review editors] you have placed me in,” Knott told delegates during the afternoon session following the morning vote. “I thank you for your confidence and trust, and I would invite you to pray for the ministries of the Adventist Review and Adventist World as we move beyond our own framing, our own sensibilities, as we seek to serve the entire [church] community.”
The vote came during a morning session of the Seventh-day Adventist world church’s 2006 Annual Council, a gathering of close to 300 leaders from around the world. World church president Jan Paulsen said the search committee, of which he was not a part, was rigorous in its approach, against the background of the nomination’s referral by the 2006 Spring Meeting of the Executive Committee. The Adventist Review Publishing Board recommended the final selection.
Knott, age 49, came to the Review following 18 years as a church pastor in New England, New York, and in Washington State—all locations in the North American region of the Adventist church. He has been responsible for coordinating the magazine’s coverage of news, Adventist heritage, and education, as well as providing editorial direction of the monthly Anchor Points edition of Adventist Review.

Born in upstate New York, Knott was raised in Texas and Massachusetts. He graduated from South Lancaster Academy in 1975, and earned a bachelor of arts degree in English and Religion from Atlantic Union College four years later. Knott completed his Master of Divinity at the Seventh-day Adventist Theological Seminary in 1983. In 2006, he was awarded a Ph.D. in History from the George Washington University in Washington, D.C. His dissertation centered on the career of early Adventist reformer and missionary Hannah More.

Knott has written close to 200 articles and columns for the magazine, including nearly 40 cover stories. Many of these features have dealt with church history subjects, most recently the links between the church and former U. S. president Warren G. Harding. He represented the periodicals at the World Council of Churches Assembly in Porto Alegre, Brazil, in February of this year and the Second International Bible Conference in Ephesus, Izmir Province, Turkey, where he also delivered a paper.

A coworker, Review managing editor Stephen Chavez, said of Knott, “Mostly what you see is what you get. Anybody who knows him knows he is a very articulate and a very talented communicator.”

Asked what aspect of Knott people might not be readily aware of, he said the new executive “likes to cook. He knows his way around a kitchen.” 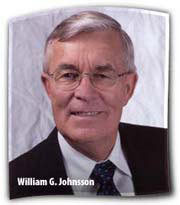 Johnsson, age 72, has edited Adventist Review for 24 years. He is also the founding editor of Adventist World, a monthly publication of the world church now reaching 1.2 million readers. Johnsson’s editorial tenure was the third longest in the magazine’s history, and he was both the first editor called from outside of North America, and the first to hold a doctoral degree. In 1995, Johnsson became executive publisher of the Review, responsible for the magazine’s business and marketing operations, under the guidance of a Publishing Board established by the world church.
Johnsson has authored 20 books, including a 2007 devotional, Jesus—A Heart Full of Grace, and more than 1,000 articles. He has become a global representative for the magazine, visiting every continent save Antarctica. A trained theologian who previously was associate dean of the Seventh-day Adventist Theological Seminary, Johnsson has represented the church in numerous theological dialogues with leaders of other faiths, including most recently the Salvation Army and the World Evangelical Fellowship.
Advertisement
Advertisement