occasionally wonder what life was like in the Garden of Eden before the damaging presence of sin in our world. The biblical narrative is brief and yet so rich. It presupposes perfect harmony, wholeness, and joy throughout creation, and clearly suggests that Eve and Adam were inquisitive creatures. This inquisitiveness must have motivated them to walk through the garden in order to explore the wonders of creation. The setting was ideal for the development of the potential with which God endowed them. Their daily journey was one of constant growth in union with God and with each other. The journey brought with it the realization of new possibilities and the discovery of new aspects of their own personalities.
In the narrative Eve appears to be the most intriguing character. Adam is depicted as a quiet person. His voice is first briefly heard when he met Eve (Gen. 2:23). In their journey they met each other in the company of the Lord. After that encounter it is the actions and the voice of Eve that predominate.
In Need of Saving Hope
The story suggests that Eve went on a walk alone (Gen. 3:1), implying that there is strength in unity. She went on a journey of knowledge, seeking to satisfy her God-given inquisitiveness. She became involved in a dialogue with the serpent, and reached a critical crossroad. We all reach such crossroads in our daily journeys. These are moments of profound significance that will have a deep impact on the quality and future of our lives.
The serpent insinuates that under the present circumstances she does not have a future that will allow her to develop her full potential. He presents her journey as circular, leading her nowhere. He suggests that her journey on this planet leads, by God’s design, into meaninglessness; that her life will become boring because God is restricting the development of her potential (verses 3-5). Her journey of self-development in union with God was, in the eyes of the enemy, a fantasy. 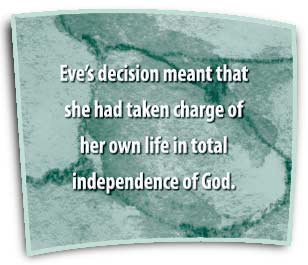 Eve argues intelligently about the integrity of God and the role He assigned to her and her husband (verses 2, 3). She is satisfied with the nature and goal of her journey. But she also seems to wonder about the nature of the new journey the serpent is placing before her. She is being tempted to initiate a journey by herself that will allow her to realize her potential without the intrusive and restrictive presence of the Creator. The destination of this new journey is mesmerizing; she will be like God (verse 5). She finally takes the first step in this journey by stretching out her hand and eating of the forbidden fruit (verse 6). It is a simple step with unimaginable consequences.
Eve’s decision meant that she had taken charge of her own life in total independence of God. A radically new chapter of her life had begun—a sad one. Her husband joined her. They both went into the unknown by themselves, soon realizing that their new journey would end in death. They were traveling toward total extinction, separated from God (the source of life), love, and peace.
Then the voice of God is heard as He travels through the garden (verse 8). He speaks to them in order to help them understand the seriousness of their condition. He walks alone because their destinations are no longer the same. He walks alone along the path He had designed for Eve and Adam, but they had abandoned it, creating their own pathways. Eve’s new journey has become a journey of fear, social and spiritual brokenness, and death.
Hope Ignited
God’s last word for us is never condemnation. He searches for us in our lostness with judgment and salvation. The choice is ours. Out of God’s love and infinite grace, He offered to Eve and Adam hope (verse 15). This was what they needed. This is the most fundamental need of rebellious human beings. This hope is not wishful thinking or the formulation of a dream that we know will never become a reality. Oh, no! Hope is the configuration of a glorious future designed by God for us. It is not the result of our own doing but of God’s redemptive and creative power, guaranteed by the trustworthiness of God’s promises and power. 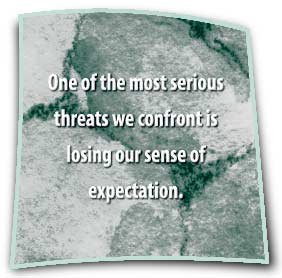 God planted hope in the desolated hearts of Eve and Adam. This was not a hope that simply expected God to do something for them in the future. Hope is rooted in God’s promises, and His promises always have an impact on the present of human existence. Hope as expectation makes its presence felt in our present condition. The hope God offered Eve and Adam had an immediate effect on both of them. It created enmity toward the deadly evil powers. This hope, through God’s power, brought with it into the present hopeless condition of the couple a profound hatred toward the enslaving power of sin. God decided to preserve human freedom and did not allow the enemy totally to enslave them. Hope presupposes human freedom, the ability to choose our journey and its destination. God was placing Eve and Adam in a situation in which they would be able to choose once more their future, their ultimate destination. The hope of a future with God had already begun to free them from the controlling power of sin.
The nature of this hope is important in the narrative. Its content is not simply an abstract religious idea that they were expected to understand and preserve. The hope God offered to Eve and Adam was hope in a Person. In fact, the Person was the hope! God said to them, “He will crush” the serpent, the source of death and meaninglessness (verse 15). This hope is embodied in the “He,” the Descendant of the woman who is also the Son of God. Consequently, the realization of this hope was not to be the triumph of an idea over other ideas, but the triumph of a Person over that which threatens personhood as created by God.
The natural journey of humans inexorably leads to death. But God established a wonderful goal for Eve and Adam during their journey in a world of sin and death. It will lead to a most glorious encounter, to a new destination, to a reencounter. Instead of meaninglessness and death, each human being could, if they so wish, journey toward a reunion with the Son of God, our only hope. Eve and Adam embraced that hope and let God remove from them their own dress to dress them with one prepared by Him (verse 21).
Journeying in Hope
It was there, before God, that Eve began a journey of hope. Her journey would take her through difficult terrain, characterized by strong feelings of guilt and loneliness, experiencing the pain of having one of her sons kill another, and witnessing death all around her. But hope sustained her! She knew that what she was witnessing and experiencing would not be the permanent condition of her existence. Something glorious was coming. Hope had impacted her present existence, and it gave her new courage in the midst of the conflict against evil. This new hope provided for her freedom to oppose the cravings of a fallen sinful nature, to reject the program of the enemy, to choose to journey in union with God. She looked forward to a glorious destination.
The Lord made it clear to Eve that the hope she was eagerly waiting for would come in the Person of one of her descendants, in a child of hers. One can only imagine the high level of expectation that this promise must have generated in her heart. When she was pregnant with her first child, she probably concluded that this might be the Promised One (cf. Gen. 4:1). But he was not. Hope transcends frustration and keeps us looking for something better. Expectation keeps hope vibrant by embracing the possibility that any moment is open to its realization. One of the most serious threats we confront is losing our sense of expectation. When that happens, we begin to lose the significance of our hope and we run the risk of slowly drifting into a journey of death. To hope is to live in expectation, to live with the firm conviction, with the assurance that God’s promises are reliable and that they could be fulfilled any moment He may choose.

In her journey of hope Eve was joined by her many descendants. She knew very little about a long wait. The divine plan required that the coming of God’s Son, the embodiment of hope, would occur at a particular moment within the cosmic conflict (Gal. 4:4). The promised Child was born of a woman. In the place where sin had access to the human race, inside the very being of a woman, God Himself entered through the mystery of the Incarnation and planted there the reality of divine hope for the whole world. What a tremendous privilege God granted to Eve! Right where the Fall took place God initiated the mystery of redemption.

But the journey continues. Our hope is heading toward its full realization at the second coming of Christ. We, like Eve, are on a journey of hope. We have made her journey our journey. This is a common journey. Around the world a people of God are traveling in the same direction, with the same vision and joy. They are all on a journey of hope; they all expect the soon realization of that hope; they are all sharing that hope. They are all looking forward to their heavenly home: “To dwell forever in this home of the blest, to bear in soul, body, and spirit, not the dark traces of sin and the curse, but the perfect likeness of our Creator, and through ceaseless ages to advance in wisdom, in knowledge and holiness, ever exploring new fields of thought, ever finding new wonders and new glories, ever increasing in capacity to know and to enjoy and to love, and knowing that there is still beyond us joy and love and wisdom infinite—such is the object to which the Christian hope is pointing” (My Life Today, p. 361).
If you have not yet embraced that hope, I invite you today to come and join us in our journey of hope.
_______________________
Jan Paulsen is the president of the General Conference of Seventh-day Adventists, with headquarters in Silver Spring, Maryland.
Advertisement
Advertisement