This article was produced as a joint effort of the International Commission for the Prevention of Alcohol and Drug Dependency and the Institute for Prevention of Addictions.

HE BENEFITS OF CHRISTIAN EDUCATION are many: an educational process more personalized than that typically found in larger public schools; a place in which students are exposed to staff and faculty who are chosen based upon not only their ability to teach, but their personal Christian values; and a system of education that is carefully designed to specifically exemplify Christlike characteristics. Such schools are also places in which young people are taught health and behavior principles that are intended to place them at lower risk for engaging in the high-risk behaviors that confront our youth today. These beneficial differences are all appropriate expectations on the part of parents, grandparents, and students who often make significant sacrifices to finance and obtain a Christian education.
We may well then ask, “Has our church’s educational system been successful in reaching these expectations?” While answers to such questions are personal and varied, based upon the experiences of parents and students, this article attempts to offer some answers to the question of whether the Adventist educational system at the secondary level has demonstrated success.
The Current Situation
Although not legal in the United States, high levels of substance abuse among youth are common, and premarital sexual behaviors have become more accepted—or at least tolerated. Add the ubiquitous Internet content to the environment with its daily fare of pornography, and the challenges facing youth and the role of parents and the church in protecting youth become almost overwhelming. Research demonstrates, however, that members of faith organizations are at lower risk for a variety of behaviors than is the general population of youth in the United States:
The fact that our youth are involved in a faith organization means that they are involved in a high-risk behavior prevention strategy that has research-documented benefits. In addition, our youth are a part of a church school program that emphasizes abstinence from substances that damage the body and mind as well as harm a relationship with God. So the questions may be asked, “How about Adventist schools? Are students who attend Adventist secondary schools and colleges at lower risk for these dangerous behaviors?” Some say, “I wouldn’t send my child anywhere but an Adventist school.” At the other end of the continuum of opinions, some say, “Adventist schools are at the same or even higher risk for drugs and other high-risk behaviors than public schools.” We were once told by an Adventist parent, a well-educated one at that, that he wouldn’t consider sending his college-age student to an Adventist college or university because of the risk of drugs on campus. Instead, he had carefully chosen a state university near home, hoping to protect his student from these grave risks.
What we have learned from research of high-risk behaviors among students attending 69 Adventist secondary schools across North America, comparing our results to a nationally representative sample of students attending public schools in North America, is that the students attending Adventist schools are at half the risk for engaging in all drugs studied (alcohol, marijuana, tobacco, cocaine, and other hard drugs) (Hopkins et al., 1998). When we compared high-risk behaviors of students attending Andrews University to behaviors of students attending public colleges and universities, students at Andrews University were at one tenth the risk for binge drinking, and generally at less than half the risk of using any legal or illicit substance (Hopkins et al., 2004).
A number of specific factors have been found to contribute to these low-risk outcomes. In a study involving the majority of Adventist colleges in North America, it was found that the church’s emphasis through its educational system on a personal relationship with Christ and its emphasis on the importance of a healthy body and mind appear to play a major role in protecting our youth from the rates of substance abuse found in the world. In addition to these factors, this large study found that relationships with parents and faculty played a major protective role. If students perceive a close relationship with their parents, other family members, another adult, or faculty member, they are significantly less likely to use any substance. These findings emphasize the important role that family members and other adults play in protecting youth from risk behaviors. The finding on the role of Adventist faculty in protecting youth through positive role modeling and relationship also supports the emphasis in Adventist education of a positive supportive relationship between students and faculty (McBride et al., 1996).
Different Roots
Youth attending Adventist schools do not all come from ideal home environments. Students are products of their homes as well as their social environments—with both their strengths and weaknesses. They bring both to Adventist schools. In some instances, the family environments of Adventist homes may even contribute to the risk of drugs and sexual behaviors. This is illustrated in our study (Hopkins et al., 1998) of youth attending Adventist secondary schools in North America, 93 percent of whom identified themselves as Adventists. We asked the students who participated in the study if their parents ever used alcohol, tobacco, or marijuana. They reported that a quarter of them had at least one parent who used alcohol; one tenth of them had at least one parent who used tobacco, and 1 in 20 had a parent who used marijuana.
In our examination of the data, we discovered that the students who had a parent(s) who used one of these substances at home, these same youth were at two to three times the risk to engage in all drugs studied. Regarding sexual behaviors, only 3 percent of the students who had never tried a drug and whose parents did not use substances at home were sexually experienced. If the student had used a substance and was from a home in which substances were used, the rate of youth who were sexually experienced jumped from 3 to 30 percent. 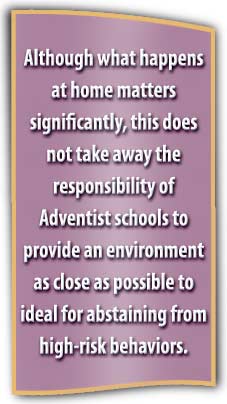 Although what happens at home matters significantly, this does not take away the responsibility of Adventist schools to provide an environment as close as possible to ideal for abstaining from high-risk behaviors. This includes clear policies about substance use, effective prevention programs, and facilitating faculty and staff as effective adult mentors. A recent analysis by Giem and her colleagues (2005) showed the importance of students’ perceptions of use rates. If students perceived that use rates were high, they were significantly more likely to use alcohol, tobacco, and other drugs. Thus, it is important for our schools to maintain clear policies, and to help students recognize that substance use is not accepted, and is not a normative part of campus life.
Facing the Facts
It is important to put to rest the notion that Adventist school environments are of equal risk as public schools for youth engaging in high-risk behaviors. Yes, we are concerned and saddened that high-risk behaviors occur, even in Adventist schools, and we would like to see this situation improve. Certainly more research is needed; it would be fair to suggest that Adventist schools should closely reexamine the elements of successful prevention regarding high-risk behaviors and assiduously apply them. And we are happy to share the research and work with schools to accomplish this. But it is reassuring to know that Adventist schools are providing substantial protection to our youth from the risks they face. And that is a fact!
____________________________
Giem, J., McBride, D., & Helm, H. (2006). “Perception and Extent of Substance Abuse in a Conservative Christian University With a Prohibitionist Substance Use Policy.” Presented at the Midwest Psychology Association, May 5, 2006, Chicago, Illinois.
Hodge, D. R., Cardenas, P., & Montoya, H. (2001). “Substance Use: Spirituality and Religious Participation as Protective Factors Among Rural Youth.” Social Work Research, 25(3), 153-161.
Hopkins, G. L., Freier, M. C., Babikian, T., Helm, Jr., H. W., McBride, D. C., Boward, M., Gillespie, S., & DiClemente, R. (2004) “Substance Use Among Students Attending a Christian University That Strictly Prohibits the Use of Substances.” Journal of Research on Christian Education (Spring) 13(1): 23-29.
Hopkins, G. L., Hopp, J., Hopp Marshak, H., Neish, C., & Rhoads, G. (1998). “AIDS Risk Among Students Attending Seventh-day Adventist Schools in North America.” Journal of School Health, 68(4), 141-145.
McBride, D. C., Mutch, P. B., & Chitwood, D. D. “Religious Belief and the Initiation and Prevention of Drug Use Among Youth.” In Intervening With Drug-Involved Youth (Newbury Park, Calif.: Sage Publications, 1996), pp. 110-130.
Merrill, R. M., Folsom, J. A., & Christopherson, S. S. (2005). “The Influence of Family Religiosity on Adolescent Substance Use According to Religious Preference.” Social Behavior and Personality, 33(8), 821-836.
Percy, A., McAlister, S., Higgins, K., McCrystal, P., & Thornton, M. (2005). “Response Consistency in Young Adolescents’ Drug Use: Self-reports: A Recanting Rate Analysis.” Addiction, 100, 189-196.
__________________________
Gary Hopkins is associate director for the Institute for Prevention of Addictions, Andrews University, and is assistant director of the Health Ministries Department of the General Conference of Seventh-day Adventists.
Advertisement
Advertisement