ost of us know someone who has been affected by a serious illness or death. I’ve been pretty lucky in that regard. Most of the people in my church or workplace who have had afflictions were sufficiently distant in relationship so that I didn’t know them well. Even in the office where I worked, the closest I got to serious illness or death was when the relative of a coworker died in another state.
That was true until Joe got cancer.
A few years ago I accepted a position in Illinois. I knew only one couple in the entire state. I had taken a position for which I had been prepared but never had filled. I had concerns about moving across country, learning a new position, having my wife find a suitable job, finding a house to buy, ensuring that our daughter got acclimated to school and friends, all the typical tensions that accompany a move. This was the first move in which we went totally out of our comfort zones.
Then along came Joe.
Extraordinary Times, Ordinary Challenges
Joe worked in my office. Every day as I arrived Joe was there with a big smile, a friendly slap on the back, and often a word of encouragement. He and his wife, Mary, often took me out to lunch. He’d drop by my office and just sit and ask how things were going. He took me golfing. He introduced me to his friends. He invited me and my family to eat with him and Mary after church. Joe would not let us be strangers. Joe and Mary became close friends. How could we resist people who gave with their hearts, their time, their smiles, and their love of Jesus? We soon felt at home again. 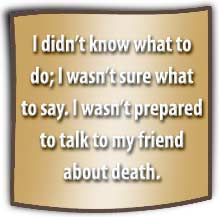 Things went well for several years until one January. Joe hadn’t been feeling well, and he finally decided to see a doctor. After that initial visit, Joe returned to report that the doctor had ordered more tests. Eventually Joe returned with the bad news we had all come to fear—cancer. Joe went in for surgery, and after that he faced six weeks of painful chemotherapy. This ugly disease brought fear and challenged Joe’s health, his spirituality, and his confidence.
I didn’t know what to do; I wasn’t sure what to say. I wasn’t prepared to talk to my friend about death. This hadn’t been a word that had been part of my life experience until then. I spent several days trying to figure out how I could help my friend. I prayed for Joe and Mary. I prayed that I might find a way in which I could be an encouragement to Joe in some way. I didn’t know what to say. I didn’t know what to do. But I felt the significant need to be there for him.
Sometimes a Great Notion
Finally, a light went on. One day Mary spoke about how Joe’s chemo treatments were a strain on him, and on her as well. A typical trip for treatment took three and a half hours. Mary would have to take off from work, and the strain of seeing Joe in discomfort was painful to her as well as to him.
I decided then and there that my mission for Joe would be to go with him to his chemotherapy treatments. I could take him in every Tuesday and stay with him during his treatments. It would give Mary some much-needed relief and give her time to recover emotionally.
I approached Joe and Mary with my offer. They both happily accepted.
So Joe and I began the weekly visits to the treatment center. At first we went and just sat and joked and talked with the others around us. Joe’s treatments didn’t take place in an isolated room. We were in a room with several others who were receiving chemotherapy. Everyone could hear what we were saying, and we could hear everyone else’s conversation.
From the very beginning I determined to make this as cheerful an experience as possible. I came prepared with funny stories, jokes, and a cheerful disposition. I was surprised at how quickly the time went. Even though the treatment was painful, as I could plainly see from Joe’s expression, he bravely endured my pathetic humor (maybe more than the treatments).

We began to talk to the people around us and tried to be friendly with them. We laughed at each other. When Joe lost his hair, I bought a latex bald head and wore it to Joe’s treatments. I got some laughs from the other patients, and from Joe, who didn’t know in advance of my plan. The nurses must’ve thought Joe and I were crazy. We brought Laurel and Hardy videos to watch.

We decided that each week after the treatment we would do something fun. One week it was to go to the golf store and buy something to improve our game (anything would help). The next week we invited the pastor and went to a fancy restaurant and had a great meal.
It got to the point that Tuesday was no longer a day to dread, but one we actually looked forward to. True, I wasn’t the one having a treatment, but the time we spent together, and the joy it brought into both our lives—and the other patients’—improved both our spirits and Joe’s courage.
A New Way of Life
Eventually the treatments ended, and with them our time together on Tuesdays. The wonderful news is that Joe is free from cancer and his prognosis is terrific. The sad news is that I miss our Tuesday get-togethers. I have to admit that although initially my mission was to cheer Joe up, I think I received the larger blessing. Joe became physically well, but I became spiritually renewed. The joy of seeing my friend with a smile and positive attitude made whatever problems I had seem distant and small. I developed a fresh perspective on heavenly values and a deeper realization of God’s leading and blessing in my life.
I wouldn’t wish for another friend to have cancer, but I do hope that the lessons those Tuesdays with Joe brought will not fade from my memory or my experience. I’m thankful for friends like Joe, who share my joys and sorrows. But most important, I’m thankful for our heavenly Father, who watches over us and spends not just Tuesdays but every day caring for us.
_________________________
Richard G. Carey is superintendent of education for the Southern California Conference of Seventh-day Adventists.
Advertisement
Advertisement

The Life of Faith
Soar Through the Bible in a Month— Chronologically
The experience was life-changing, with testimonials pouring in.