undreds of Boston-area Catholics have witnessed a rare sight this week (May 25-June 3): a cardinal of the church lying prostrate before them, begging forgiveness for the "sins and crimes" of abusive priests.
But this landmark ritual, repeated on nine consecutive nights at nine parishes where abusive acts took place in decades past, has elicited more trembling than triumph as a wounded diocese tries to take baby steps toward reconciliation.
Isabel McIntyre's hands shook, for instance, as she recalled her abused daughter's psychiatric hospitalization before a crowd of 400 worshippers here Tuesday (May 30) at St. Joseph Church. Moments later, an elderly priest's arms quivered as he struggled to lay face-down in a gesture of humility alongside seven fellow clerics, including Boston's Cardinal Sean P. O'Malley.
For Boston's beleaguered archdiocese, this "novena" of prayer services on the eve of Pentecost has marked the first time church leaders have used a public ritual to apologize for the clergy sexual abuse crisis that erupted in January 2002.
During Tuesday's service, O'Malley walked the church's center aisle, passing a flame to candle-holding worshippers until each face glowed in the fragile flickering. Then, in what seemed to be a sort of exorcism, he prayed for the expulsion of "all that is not of God" and processed through the sanctuary, shaking droplets of holy water on bowed heads. A lilting tune played on the piano as congregants sang a repetitive chant. Attendees, mostly senior citizens, crossed themselves as O'Malley passed.
Some in attendance welcomed the symbol-rich event as a long-awaited step in the right direction.
"This is a beginning," said Ed Wade, a church reform activist from Gloucester, Mass. "It was the first acknowledgment of wrongdoing (in which) there were no lawyers hanging on or writing the script."
Others, however, found the message to be long on pageantry yet short on substance. Dale Walsh of Cambridge, who says defrocked priest Paul Shanley abused her more than 40 years ago, saw the series as a "public relations ploy" but attended nonetheless because she wanted to see O'Malley lie prostrate.
"What I really wanted to do was take my foot and press it on his head," Walsh said. "I have a lot of anger." O'Malley is the target, she says, because "he's the church."
For 41/2 years, the clergy abuse scandal and its painful aftermath have tormented greater Boston's 2 million Catholics. Though the church has settled 895 claims against dozens of priests to the tune of $127.4 million, closure remains elusive. A budget crisis, exacerbated by the withholding of donations, has forced the closure of 62 of the diocese's 365 parishes since May 2004.
And the clouds of scandal still loom. Just this month, O'Malley came under fire for allowing a Catholic hospital system executive to keep his job despite multiple allegations that he had sexually harassed female employees. The executive, Dr. Robert Haddad, was later forced to resign.
With this month's novena tour, O'Malley is acknowledging the Boston church's persistent woes and pleading for the Holy Spirit to intervene. The tour began May 25, on the Feast of the Ascension, which marks the moment when a resurrected Jesus Christ left his disciples and ascended to heaven. What was then "a moment of great confusion, pain and fear," O'Malley told worshippers, gave way to great rejoicing 10 days later when the Spirit came at Pentecost. As then, he said, "the Lord ... has not abandoned us. He has not left us as orphans."
"We are stretching out the withered hand of the body of Christ and asking God to heal us," O'Malley said. To abuse survivors and their families, he said, "We will forever be sorry for the harm you've suffered."
Outside, some 15 protesters carried signs and handed out leaflets. They voiced two primary complaints -- one, that O'Malley hasn't supported proposed legislation in Boston to eliminate a statute of limitations, which has shielded some accused abusers from prosecution; and two, O'Malley hasn't taken steps to make public all names of diocesan priests "credibly accused" of abusive behavior.
"What gives him the right to think he can heal anybody?," asked John Harris of Norwood, who says Shanley raped him in 1979.
But for some of those who attended, the event ushered in some long-awaited moments of joy. Having watched all the priests lie prostrate, one woman who identified herself as a survivor afterward hugged the Rev. Ronald Gariboldi, a priest at Holy Family Church in Gloucester.
"I was very moved," Gariboldi said after the embrace. "That was the first time I had met a survivor" of clergy sexual abuse.
Lutheran Hospital, Caught in Crossfire, Struggles to Stay Afloat
By MICHELE CHABIN                                                                                                        c. 2006 Religion News Service

Augusta Victoria Hospital, a facility that treats Palestinian residents from the West Bank as well as some Arabs from East Jerusalem, has a million-dollar view from its perch atop the Mount of Olives.

Built in 1910 by Germany's Kaiser Wilhelm II, the stone building affords a heart-stopping vista of the Old City of Jerusalem, whose ancient walls gently slope into the contours of the hills and valleys below. Sunlight glints off the gold-topped Dome of the Rock, built on the contested Temple Mount.
Yet even with its priceless panorama, Augusta Victoria, which is owned and operated by the Lutheran World Federation (LWF), has been on an emergency footing since January, the last time the cash-starved Palestinian Authority was able to pay its debts.
The hospital, which relied on the Palestinian government's insurance payments for 40 percent of its operating budget, was unable to pay its employees their April salaries, and is living on credit with suppliers.
"We're in a difficult situation, even though we're receiving help from churches around the world," said the Rev. Mark Brown, the LWF's regional representative in Jerusalem, referring to an emergency international appeal on the hospital's behalf. "There are facilities in even worse shape."
The Palestinian Authority owes huge sums of money to numerous hospitals, schools and clinics, which are scrambling to make up the shortfall without sacrificing vital services.
Augusta Victoria, like other humanitarian institutions, has been caught in the middle.
The crisis began when several Western governments, including the United States and the European Union, decided to withhold hundreds of millions of dollars from the Palestinian Authority after Hamas scored a resounding victory in last January's elections. The governments fear that Hamas, which has perpetrated numerous suicide bombings, could use the money to sponsor terrorism.
Prior to the Hamas win, about a quarter of the Authority's gross disposable income came from donor countries. Much of that aid paid the salaries of 160,000 civil servants, and helped support medical care and other services.
Members of the "Quartet" -- the U.S., Russia, the United Nations and the European Union -- decided on May 9 to establish a fund to pay impoverished government employees. They say they are finalizing plans to channel money through alternative channels, but no one knows when or how the funds will reach the people who need it most.
"I frankly don't know how people are living," said Noah Salameh, director of the Center for Conflict Resolution and Reconciliation, an interfaith organization in Bethlehem. "Without money coming in from the government, without salaries, people are beginning to starve. By the time the donor countries figure out how to distribute the money by bypassing Hamas, a lot of people could die."
Exiled Russian Orthodox Church
Votes to Resume Ties With Moscow
BY NATE HERPICH                                                                                c. 2006 Religion News Service
Leaders of an exiled overseas Russian Orthodox church have unanimously voted to reunify with the Moscow-based Russian Orthodox Church, ending a split that began with the 1917 Bolshevik Revolution.
The Russian Orthodox Church Outside Russia (also known as the Church Abroad) was founded in 1920 by Russian refugees who wanted to preserve a church that was free from communist control.
The exiled church accused clergy in the Russian Orthodox Church of conspiring with the Soviet regime, and even in the decade since the fall of communism continued to maintain its distance from the Moscow Patriarchate.
The vote by the church's Council of Bishops -- convening for the first time in over 30 years and only the fourth time ever -- followed the recommendations of the denomination's All-Diaspora Council, which met May 7-14 in San Francisco.
"It is difficult to measure and assess how much time and energy has been wasted on confrontation on both sides in those decades of division during the godless regime, which tried to destroy but was unable to overcome the church of Christ in the much-suffering land of Russia," the Council said in a statement.
In recent years, members of the Church Abroad had worried that their voice would be ignored if they surrendered their independence. Worldwide, there are 400 Church Abroad parishes with fewer than 200,000 members. The Moscow Patriarchate has 19,000 parishes and 80 million members.
Metropolitan Laurus, the first hierarch of the Church Abroad, visited Russia in 2004 to discuss the possibility of reunification. In some U.S. cities, parishes from both denominations can be found in the same neighborhoods.
"The Word of God teaches us that the times are changing," the Council said, citing Ecclesiastes: "`To every thing there is a season, and a time to every purpose under the heaven.'"
"There was a time for resistance; now the time has come for reconciliation."
Ohio Law Lets God Inside SchoolhousesBY REGINALD FIELDS                                                     c. 2006 Religion News Service

When Ohio public school students return to class this fall, they could see a prominent new name among the student body--God.

The state General Assembly this week passed a bill that would require public schools to post donated copies of the U.S. or Ohio mottoes, each of which contain the word "God."
House Bill 184 requires the phrases to be framed or printed, 8.5x11 inches, free of any image other than the motto words and the American or Ohio flag, and not paid for at taxpayer expense. Any person or group could donate the mottoes. The national motto is "In God We Trust"; the state's is "With God All Things Are Possible."
"The goal is to make sure that students have a basis to talk about the historical aspects of how this country was founded," said state Rep. Keith Faber, who sponsored the bill. "I don't think the mottoes are necessarily religiously based," the western Ohio Republican said.
Theresa Fleming, of Strongsville, who heads Moms for Ohio, a political action committee, testified for the bill during committee hearings.
But critics of the bill say the legislation will add nothing to the students' learning experience and is merely an election year campaign item in place of other more pressing education matters such as school funding. "Fundamentally, it is at odds in the historical sense of who we are," said Jeff Gamso of the American Civil Liberties Union of Ohio. "It is the state deciding rather than the parents what religious exposure or images our children are exposed to."
Gamso testified against the bill months ago and thought it had stalled. But the Ohio House approved the bill Thursday, after the Senate did a day earlier. "I had hoped it would die a quiet death," said Gamso, who also wondered if the provision violates the U.S. constitutional principle separating church and state.
Gov. Bob Taft is expected to sign the bill, and after the mandatory 90-day wait, the mottoes could be in public schools -- including charters -- this fall.
Advertisement
Advertisement

Magazine Article
​The Sanctuary Doctrine
Even after His ascension, Christ’s redemptive work continues. 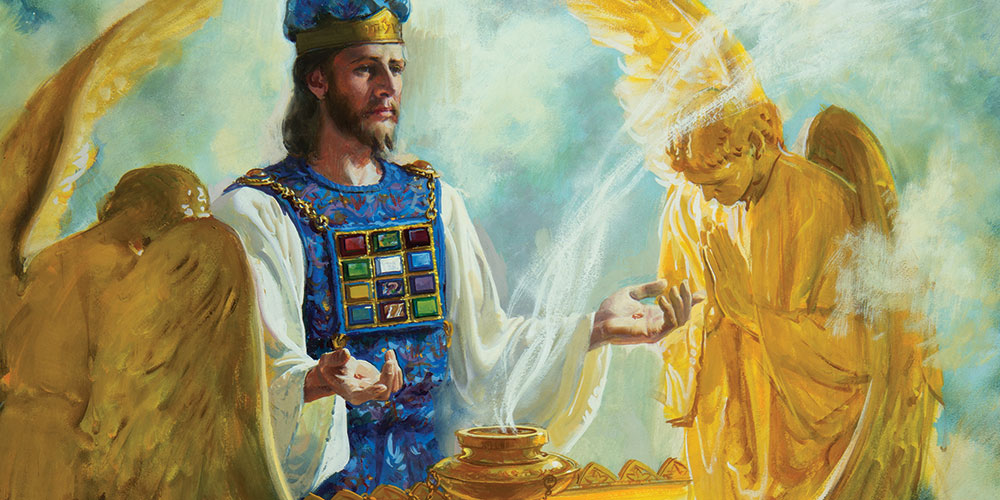