esperate to find solutions to the U-boat threat during World War II, Britain drew up plans to build an unsinkable aircraft carrier out of ice. The brainchild of Geoffrey Pyke, the H.M.S. Habbakuk1 was to be made of a mixture of ice and wood pulp (dubbed “Pykrete,” after its inventor). Incredibly slow-melting, Pykrete could be hammered and sawed like wood. The 280,000 forty-foot cubes needed for construction would take eight months and 8,000 workers to make in Canada. Possessing a draft that promised to keep it out of most of the world’s harbors, the 2,000-foot-long “berg-ship” would displace 2 million tons.

In the end, however, the Habbakuk was never built. Land-based aircraft were attaining longer ranges, U-boats were being hunted down faster than they could be built, and the United States was gaining numerous island footholds in the Pacific—all contributing to a reduced need for a vast, floating airfield. And deep within the newly built Pentagon was the knowledge that Americans already had a secret weapon in development at Los Alamos—an end to the war not by ice but by fire!

Habakkuk’s Grand and Awful Message
Unlike his carrier namesake, the prophet Habakkuk behaved more like an attack battleship. He blasted Judah for its scandalous conduct shortly before Josiah purged the idols from the land—for the first time. He also announced the resurgence of Nabopolasser and Nebuchadnezzar over Babylon, some 25 years before Jerusalem would fall to them in 605 B.C.

Though sometimes referred to as a “freethinker” and the “father of Israel’s religious doubt,” Habakkuk possessed a tenacious faith.2 Still, his countrymen’s open apostasy profoundly disturbed him. How was Judah to balance God’s lavish promises against His dire threats?

Exhausted in trying, he finally announces that he is formally registering his concerns with God, then boldly declares, “I will stand my watch and set myself on the rampart, and watch to see what He will say to me, and what I will answer when I am corrected” (Hab. 2:1).* 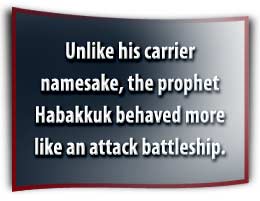 Habaqquq is an unusual Hebrew name apparently derived from the verb habaq, “embrace.” Thus his name likely means “one who embraces,” or “one who clings.” By the end of his book the name is even more appropriate because Habakkuk chooses to cling firmly to God regardless of what may happen to his nation (Hab. 3:16-19). In the Septuagint (the Greek translation of the Old Testament) his name is Ambakouk, and the Latin title in Jerome’s Vulgate is Habacuc.

Habakkuk-the-Book is essentially a dialogue between the prophet and God. He begins with a question common to all of us: Why do the wicked prosper? But God’s reply stimulates yet another query: How can God use a more profane nation to punish one less profane? After God informs him that Babylon will also be overthrown, Habakkuk ends his dialogue with a series of judgments against Babylon, followed by a brief but plaintive poem expressing confidence in God. Three specific selections may serve to highlight his effectiveness as both a prophet and writer:

1. Habakkuk 1:6—“For indeed I am raising up the Chaldeans [Babylonians], a bitter and hasty nation which marches through the breadth of the earth, to possess dwelling places that are not theirs.”

This is not the first time God disciplined His people through the bad intentions of others. God called Assyria His tool of wrath against the northern kingdom: “I will send him against an ungodly nation, and against the people of My wrath I will give him charge, to seize the spoil, to take the prey, and to tread them down like the mire of the streets” (Isa. 10:6). And God declares through Jeremiah, “Therefore thus says the Lord of hosts: ‘Because you have not heard My words, behold, I will send and take all the families of the north,’ says the Lord, ‘and Nebuchadnezzar the king of Babylon, My servant, and will bring them against this land, against its inhabitants, and against these nations all around, and will utterly destroy them, and make them an astonishment, a hissing, and perpetual desolations’” (Jer. 25:8, 9).

These iniquities are not merely incidental misbehaviors, but the result of prolonged, hardened, intentional lust and avarice. The prophet complains: “Why do You show me iniquity, and cause me to see trouble? For plundering and violence are before me; there is strife, and contention arises” (Hab. 1:3). Indeed, radio evangelist Woodrow Kroll concludes, “Everything that happened to the city of Jerusalem and to Zedekiah, its king, happened because of sin in their lives. God will judge sin, but God also sends lots of warnings to tell us well in advance that judgment is coming.”3

2. Habakkuk 2:4—“Behold the proud, his soul is not upright in him; but the just shall live by his faith.”

This text has been proclaimed one of the greatest declarations of faith to be found in all the Bible.4 By contrasting the proudly rebellious with the humbly submissive, the striking difference between the proud and the just person is more fully revealed. The future belongs to the righteous, while the wicked have no future. Wickedness carries with it the seeds of its own destruction (Ps. 10:4; Prov. 6:18). Pride, tyranny, and evil cannot last, but the righteous shall live by faith.

The verse reappears in Romans 1:17: “For in it the righteousness of God is revealed from faith to faith; as it is written, ‘The just shall live by faith.’” And it became the great revelatory centerpiece of Luther’s break with the Catholic Church.

More than four centuries ago devout priest Martin Luther sat stooped over an open Bible in his monastery. A good man of high moral fiber, he had given up all material wealth to serve God. He could not help feeling proud of the dedicated life he was leading. Few could match his fervent work for the church. Yet as he read his Bible that day he must have recoiled in shock, “The just shall live by faith.” He suddenly realized that he had been living a life of works and tradition. Though his intentions were admirable, the text informed him that all his efforts had fallen short of God’s requirements. The Bible declares from cover to cover that salvation comes only by faith, not by the collection of good works. “God saved you by his special favor when you believed. And you can’t take credit for this; it is a gift from God. Salvation is not a reward for the good things we have done, so none of us can boast about it” (Eph. 2:8, 9, NLT).†

A slightly edgier slant to the theme comes through in Hebrews 10:38: “Now the just shall live by faith; but if anyone draws back, My soul has no pleasure in him.” Does this sound as if we are saved merely by the Lord’s favor and that our consecration, or lack thereof, won’t affect our destiny? Hebrews indicates that faith is for the long haul (verses 36-39). It is not a singular event, confined to a distinct point in time and space, it is a way of living. Good and honest hearts bear fruit with patience (Luke 8:15), and eternal life belongs to those who patiently continue in doing good (Rom. 2:7). “Any set of religious duties, whether they be Judaic, Christian, or of some other religion, or our own personal standard of uprightness that we practice apart from living each day in the pursuit of Christ, are dead works. All we are able to achieve apart from Christ is loss for Him and therefore loss for us.”5

“Faith and works are to travel side by side, step to step, like the legs of people walking. First there is faith, and then there are works; and then faith again, and then works again—until we can hardly distinguish which is the one and which is the other.”6

3. Habakkuk 3:17, 18—“Though the fig tree may not blossom, nor fruit be on the vines; though the labor of the olive may fail, and the fields yield no food; though the flock may be cut off from the fold, and there be no herd in the stalls—yet I will rejoice in the Lord, I will joy in the God of my salvation.”

One commentator offers the following analysis of this revealing passage: “But those who when full enjoyed God in all, when emptied can enjoy all in God. They can sit down upon the heap of ruined creature comforts, and rejoice in Him as the ‘God of their salvation.’ Running in the way of His commandments, we outrun our troubles. Thus Habakkuk, beginning his prayer with trembling, ends it with a song of triumph.”7

This text also points to the resilience required of Christians at the end of days. It will then appear as if God’s faithful must seal their testimony as did the martyrs before them. Tempted to think God has left them to fall at the hand of their enemies, they plead day and night for deliverance. Still, their antagonists continue pelting them with jeers: “Where is your faith now? If you are God’s chosen people, why doesn’t He deliver you out of our hands?” But they remember their Savior surrounded by the mocking mob: “He saved others,” they taunted, “Himself He cannot save. If He is the King of Israel, let Him now come down from the cross, and we will believe Him” (Matt. 27:42).

Like Habakkuk, the Christians cling to God as they press forward their earnest intercession.8

Habakkuk From a Higher Vantage
Wiersbe named his book on Habakkuk From Worry to Worship, while Lloyd-Jones titled his From Fear to Faith. Habakkuk’s story begins with his concern about the wickedness of his countrymen and God’s apparent indifference, but it ends with a reverent paean to Yahweh. He trembles with foreboding when he learns the ravenous Babylonians are coming for Judah, but God’s overarching promises deliver peace to his mind. These two authors were seeking to capture on the printed page the prophet’s progression from questioning to trusting.

The far intent of Habakkuk’s message is obviously conceived to comfort those today marooned within a wicked society. As we ponder Habakkuk’s message, we see that it came true, but that God also protected His remnant even in Babylon and remembered to bring them home again. This prophecy and the history surrounding it demonstrate once again that God can be trusted.

Each and every prophecy need not boast whizbang information detailing the future. Many merely carry a “heart” message to remind us that God is still in control. Habakkuk’s does both, bringing a minor comfort for now—and a major hope for tomorrow!

______________________
Before his retirement Gerald Colvin was a public and private school administrator, as well as a professor and graduate dean at various universities, including Southern Adventist University.