On the one hand, I am very thankful to live in the United States of America. I enjoy life, liberty, and freedom to do most anything (other than tear the tag off of a mattress). On the other hand, paying taxes is as much fun as a root canal.

But what does the Bible teach on this topic of taxes and relating to governmental authority?”

Well, it doesn’t say anything about April 15, but it does have something to say about modeling a God-honoring attitude toward the government.

This is the attitude we see in Bob Meyers, the brother of Dean Meyers who was slain on October 9, 2002, by sniper John Muhammad in Manassas, Virginia. Paul Zahn on CNN once asked Meyers if he was bitter toward the government for not adequately protecting his brother. Meyer’s replied, “No, I would say that there isn't a bitterness. I believe that those responsible have to deal with the authorities that God has instituted. First, He instituted human government—and also God says that He'll avenge losses. So we defer to those two authorities and obey the Scripture that indicates that we're not to avenge ourselves as individuals.”[i]

It’s hard for me to imagine how difficult it must be to lose a brother; but then to harbor no bitterness toward civic leaders for allowing such an unnecessary and tragic death is even more remarkable. I admire Bob Meyers for his mature attitude of submission toward authority. 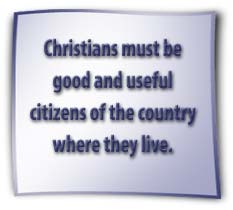 This attitude of submission is what we’re called to in 1 Peter 2:13-17 where Peter speaks of compliance to governmental authority. He writes, “13Submit yourselves for the Lord's sake to every authority instituted among men: whether to the king, as the supreme authority, 14or to governors, who are sent by him to punish those who do wrong and to commend those who do right.”

Notice that Peter calls us to submit to state authorities. Remember that the recipients of Peter’s letter in the first century are being tortured under the cruel reign of Nero, the emperor of Rome. Nevertheless, Peter makes it clear that Christians are to obey civil authorities. This, of course, does not mean that we are to violate God’s laws in order to obey the dictates of man. Peter himself, when standing on trial before the Sanhedrin, said “We ought to obey God rather than men” (Acts 5:29). With that exception in mind, the general principle stands: Christians must be good and useful citizens of the country where they live.

Peter’s instruction on this topic is consistent with the rest of the New Testament. Jesus said, “Give to Caesar what is Caesar's, and to God what is God's” (Matthew 22:21). In Romans 13 Paul taught that those who govern the nation are sent by God and should be respected. In First Timothy 2:2 we’re told to pray for kings and leaders in authority.

Peter goes on to explain why it is so important to submit to state authorities. Verse 15: “For it is God's will that by doing good you should silence the ignorant talk of foolish men.” By leading lives of holiness and integrity, we quiet the critics who would accuse us of wrong-doing. Let’s face it: everyone is impressed with godly behavior.

I am reminded of the man who went to a fast-food chicken place and bought a nine-piece bucket of chicken. He went to the park for a romantic picnic with his lady.

Upon digging into the bucket, however, he got a big surprise. Instead of chicken he discovered the restaurant’s night deposit—nine thousand dollars! The young man returned to the restaurant and asked for his chicken in exchange for the money. The manager, in awe of the young man’s honesty, asked for his name and told him he wanted to call the newspaper and the local news station to do a story on him. He would be a local hero, an example of honesty that would inspire others.

This is what Peter is talking about: by doing good, others are impressed. They take notice, just as the manager did in the case of this honest chicken-eater.

But now for the rest of the story: The hungry man shrugged it off. He said, “My date’s waiting. I just want my chicken.”

The manager was now even more impressed. “You’re not only a man of integrity,” he said, “but you’re also a person of deep humility. This makes your story even more compelling. Please, I must share your story with the local media.”

By now the hungry man was visibly agitated. He shouted, “Just get my chicken, would you?”

“I don’t get it,” the manager replied. “You’re an honest man in a dishonest world. This is the perfect opportunity to inspire others toward integrity. Please, give me your name and also the woman’s name. Is that your wife?”

“That’s my problem,” the young man confessed. “My wife is at home. The woman in the car is my girlfriend. Now let me have my chicken so I can get out of here.”

When Peter challenges us to do good, he’s not talking about just looking good on the outside. This is not about some charade of devotion. No, Peter’s appeal throughout this letter is to “be holy.” New Testament scholar, Paul Cedar, explains: “Peter returns to one of the basic themes of this epistle—that of holy conduct. He reminds us vividly that God is not merely concerned with our profession; He is concerned with our possession—our lifestyle. He desires that we live holy and honorable lives; that our ‘conduct’ may be observed as good by outsiders.”[ii]

Peter then writes in verse 16: “Live as free men, but do not use your freedom as a cover-up for evil; live as servants of God. 17Show proper respect to everyone: Love the brotherhood of believers, fear God, honor the king.” 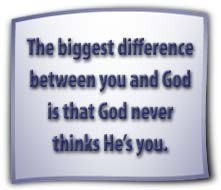 Here we find a succinct strategy for submission. It’s too easy to read through this passage in First Peter and theoretically agree that it’s a good idea to practice submission toward state authorities. But Peter won’t let us get away with just agreeing in some hypothetical sort of way. He gets real practical now and tells us what submission looks like in real life. He offers three challenges for those of us who would take seriously this summons to submission.

Peter gives us the same challenge when he calls us to love the church.

The second command from Peter is to “&h
ellip;fear God.” You see, submission includes a humble recognition of God’s sovereignty.

In his book, The Three Christs of Ypsilanti, Psychologist Milton Rokeach describes three of his patients at a psychiatric hospital in Ypsilanti, Michigan. These men, Leon, Joseph, and Clyde, refused to fear God or practice submission. Instead each one suffered from “psychotic delusional grandiose disorder.” Put simply, each one thought of himself as God. For two years Rokeach labored with them, but healing seemed hopeless.

In desperation Rokeach put them in close proximity with one another, thinking this might cause them to see beyond their own grandiose delusions. This led to some interesting discussions. One of the men would claim, “I am the Messiah. I am on a mission to save the earth.”

“How do you know?” Rokeach would ask.

Another patient would counter, “I never told you such a thing!”

It’s hard to know whether to laugh or cry at their story. But do you suppose we all suffer from a messiah complex? It may not be severe enough to land in Ypsilanti, but it’s just as irrational as Leon, Joseph, and Clyde’s condition. This delusion is as old as the Garden of Eden, when the serpent tempted Eve by saying, “… you will be like God” (Genesis 3:5).

I have heard it said, “The biggest difference between you and God is that God never thinks He’s you.” Whenever you fear God by admitting that only God is God, and then you trust Him fully as God, you practice the spiritual art of submission.

Returning now to First Peter, we’re told there are three ways to practice submission: “Love the brotherhood of believers, fear God,” and finally, “honor the king.” In other words, live as an exemplary citizen. Respect authority. Obey the laws of the land.

Justin Martyr once wrote to the king, “Everywhere, we, more readily than all men, endeavour to pay to those appointed by you the taxes, both ordinary and extraordinary, as we have been taught by Jesus. We worship only God, but in other things we will gladly serve you, acknowledging you as kings and rulers of men, and praying that, with your kingly power, you may be found to possess also sound judgment.”[iv]

I pray that we would have this same attitude of submission toward earthly authorities. Let the words of this verse echo in your mind and play out in your life. As The Message translation puts it, “Love your spiritual family. Revere God. Respect the government.”

Will you live that verse today? As you think about it, I must run. I’ve got to finish my taxes.